“We know that mass participation and civil disobedience works”. 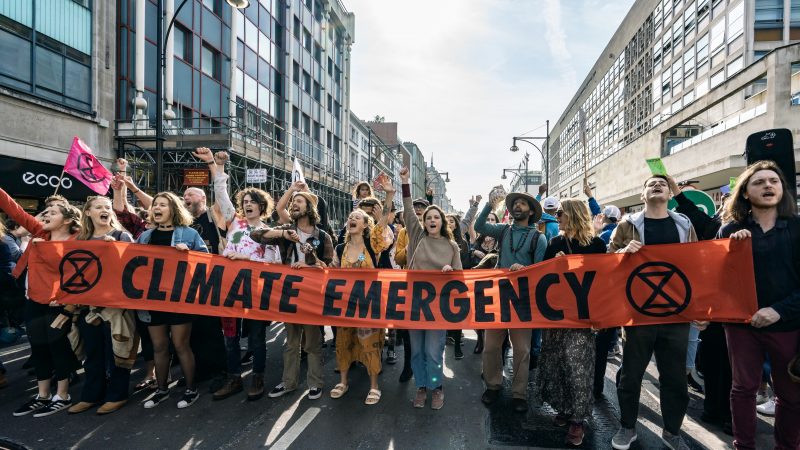 As Extinction Rebellion engages in two weeks of climate protests, we take a closer look at what the group hopes to achieve as a result of the latest action it is undertaking and what its message is to its critics.

Extinction Rebellion also known as (XR) has made it clear that it believes in using non-violent civil disobedience to compel governments to tackle what it says is a climate and ecological emergency. The recent report published by the Intergovernmental Panel on Climate Change, the world’s leading authority on climate science, made clear the scale of the crisis facing the planet.

Scientists declared that human activity was responsible for changing the earth’s climate in unprecedented ways, warning that within the next two decades, temperatures could rise by more than 1.5C above pre-industrial levels, meaning there could be more extreme weather events. Countries like Germany and Belgium have suffered the deadliest flooding in decades, with at least 190 people losing their lives last month. The 20 hottest years since records began in 1850 have occurred in the last 22 years.

Groups like XR are demanding the government act faster to tackle the threat posed by climate change. The UK will be hosting the UN Climate Change Conference (Cop26) in Glasgow in November, where heads of state, climate experts and campaigners try to coordinate action to tackle climate change.

“We’re out on the streets ahead of the COP26 climate talks. We have our three demands, tell the truth, act now and put in place a national citizens assembly on the climate crisis,” says Nuala Gathercole-lam, a spokesperson from the group.

“But we’ve also got an immediate demand this time, for government to stop all new investment in the fossil fuels immediately.”

Nuala says that this isn’t a particularly radical or new demand, with the International Energy Agency also saying that countries must halt all investment in new fossil fuel supply projects.

“We’re saying to the government, that if you’re at all serious and if you want to show the public and the world that you’re serious about the climate crisis ahead of COP26, this is the least that you could do, it’s the smallest first step you could take.”

More than 200 arrests have taken place since XR began its protests, known as the Impossible Rebellion which kicked off on Monday. The group says it will also be focusing on the capital’s institutions which it says are helping to fuel climate change.

XR says it does not plan to disrupt public transport. “This time we’ve been in Covent Garden, in Cambridge Circus, we’ve actually been in relatively undestructive locations and the idea has been to hold crisis talks.

“The government hasn’t consulted with ordinary working people about how we address this crisis and so we’ve said come to the table let’s talk about this, the public deserve to be part of the conversation.”

The government has pledged to reach net-zero emissions by 2050. In recent week,s there’s been an attempt among the right to portray commitments to net-zero as too expensive and unrealistic. It’s a charge that Nuala rejects.

“It’s ridiculous. The idea that we would determine whether or not we act on the climate crisis on the basis of what the poorest in society can afford out of their own pocket is completely ridiculous.

“There is the money to pay for this. What we need is for the government to make a plan to pay for it, the idea you would leave it up to whether people can afford to insulate their own houses , change their boilers, is completely insane. The government has just scrapped the green homes grant which was a big investment in insulating homes and helping people out with fuel poverty at the same time and transitioning away from such heavy fossil fuel use, so they’re moving in the opposite direction.”

There has been some criticism of Extinction Rebellion in the past, for lacking racial diversity and being too middle class. Does Nuala agree with such criticism?

“It’s absolutely the case that this crisis will play out along existing fault lines of class and race as we see food shortages and price hikes. In response to that, it’s people of colour and working-class communities that are going to feel that first and at XR we very much understand we have a job to do.

“We’re not diverse enough, the climate movement isn’t diverse enough, this rebellion actually started on the anniversary of the Haitian revolution and was opened by the XR internationalist solidarity network. We’re going into rebellion in solidarity with groups that have been in rebellion for centuries around the world and just here in the UK now we’re waking up to the fact that the system we’re in is coming for us as well. We know we need to be in solidarity with people who have had to fight for life for hundreds of years.”

Over the coming days XR is planning further protests, occupations and acts of rebellion in a bid to get the government and others to recognise the scale of the climate emergency facing the planet. There will be a Carnival for Climate Justice.

“It worked in the civil rights movement in the US, it worked when the suffragettes did it to get votes for women in the UK, it worked in 2019 after our rebellion, Parliament declared a climate emergency. So we know this works and there are lots of different ways to get involved, you don’t have to be ready to be arrested or be doing this full-time, just come down and speak to us.”