The dispute marks the continued fallout from allegations of sexual harassment revealed last year, as well as concerns over pay. 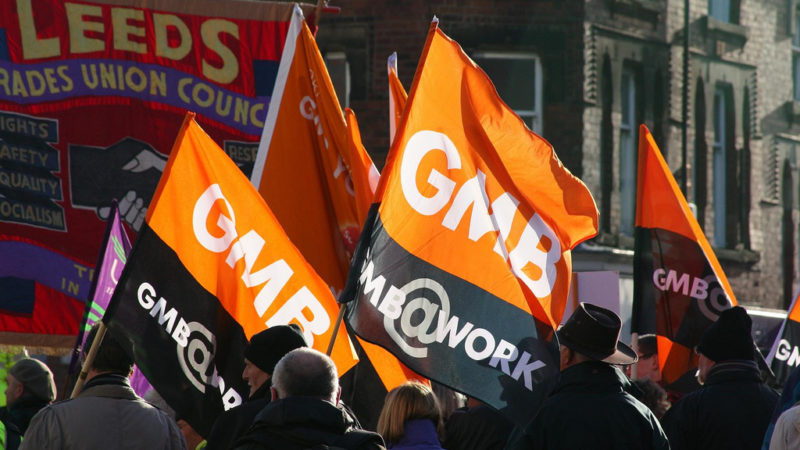 Staff who work for the GMB union are to be balloted for strike action, in a growing dispute over pay and the handling of harassment complaints, Left Foot Forward can reveal.

A letter from Unite’s regional officer, Onay Kasab, sent on the 9th August, accuses the GMB union – which represents around 600,000 workers in Britain – of sending ‘threatening’ communication to its own staff, alongside a ‘serious deterioration’ in pay talks, and alleged mishandling of internal complaints. At least one grievance case involves harassment allegations, LFF understands.

After receiving anonymous allegations regarding senior GMB officials’ conduct last April, the union conducted a barrister-led internal inquiry, which found that bullying, misogyny, cronyism and sexual harassment were “endemic” within the union. The union’s new General Secretary, Gary Smith, pledged to implement the recommendations of the Monghan report in full, a plan ratified by the GMB’s conference in June.

While pay is understood to be a key sticking point in Unite’s dispute with GMB, concerns that harassment complaints are still not being handled effectively also play a role, LFF understands. In one case, a complaint about a regional officer’s conduct was reportedly handled by another regional officer. In its first paragraph, the Monaghan report noted that ‘regional secretaries are, and always have been, men’, and singled regional officers out for contributing to a ‘bullying’ culture.

Unite’s London regional officer Onay Kasab Kasab told Left Foot Forward: “There are a number of individual [grievance] cases that are quite serious. It’s indicative of a wider culture.”

Referring to regional officers handling complaints about their colleagues, he added: “When we deal with employers, I’d expect the manager to be at an appropriate level. It’s surprising that even within a trade union we’re having to argue about those issues.”

Kasab expressed concern that some GMB management figures who are members of Unite have sought to attend union meetings concerned with harassment, which he deemed ‘inappropriate’.

“We’re happy that managers also join a trade union, and encourage it. But there are times you have meetings with employees when those managers shouldn’t be there. The biggest example is when you accuse managers of having a bullying culture: they shouldn’t be in that meeting. We are getting criticism as a union for pointing that out.”

He added that harassment cases are ‘particularly pertinent’ to the threatened strike action. “From the calls we’re getting, emails we’re getting – I think there’s a genuine problem,” Kasab said.

Kasab also accused GMB of not properly engaging Unite on issues of pay: “Those talks have effectively collapsed. The employer is accusing us of walking away. We’re saying it’s the employer not engaging with us.”

The GMB did not comment on the allegations but said it was committed to implementing the 27 recommendations of the Monaghan report in full, and had already made major changes.

The letter from Unite to members working in GMB states: “[GMB] has failed to address our concerns. We are of course more than aware of the impact that an industrial action ballot involving union employees will have. However, we believe that in this case, just as with some of the worst employers, the employer has relied on this exact point. The fact that your employer is a trade union does not absolve it of its responsibilities — if anything the expectation is that it should be a model employer. This is certainly not the case at the GMB…

In response to the allegations, a GMB Spokesperson said: “GMB has already responded fully last week to the letter from the Unite official.

“It is not the practice of GMB, or any other union, to comment on matters that may be the subject of internal procedures.”

“On the Monaghan Report, the Central Executive Council set up a Task Force to implement the report’s recommendations. The Task Force has reported to Congress on this in June.

“The Task Force has already started its second year of work on the full implementation of the Monaghan recommendations.”

It is not clear what the timing for the ballot is, but voting will be followed by a 14-day notice to GMB if members back strike action.

The news comes as both Unite and the GMB unions prepare to ballot the Labour Party for strike action over plans to cut 90 members of staff. Both GMB and Unite unions are afiliated to the Labour Party.

Strikes of this kind are rare. In 2014, staff of the TSSA union – who were members of GMB – took strike action over a ‘botched’ restructuring exercise. Staff had been told that 30 employees out of 50 would be displaced from their jobs, with many told to apply for their own jobs following an assessment process. The National Secretary who led that dispute was now-General Secretary Gary Smith.

Left Foot Forward can publish the letter from Unite to GMB in full.

We are having to write to you following what we believe to be a serious deterioration in matters concerning pay, grievance complaints, disciplinary investigations and the general industrial relations position. It is unfortunate, but we do need to let you know that the employer [GMB] is seriously undermining the position of your representatives and the representative bodies.

A number of communications have now gone out from the employer to staff. In one region, a particular communication could easily have been read to be of a threatening nature.

There are issues that are obviously collective matters, for instance pay. However, we have now reached the stage where we believe that individual [grievance] cases now need to be dealt with on a collective basis. This is nothing new to Unite. In campaign after campaign, where disciplinary or grievance cases were of such a serious nature or where the impact was on more than one individual, we have been prepared to move from internal grievance / disciplinary processes to collective action. What we will not allow to happen is for individual members to receive poor treatment from the employer under cover of darkness — instead our preference is to shine a light on such cases.

We have now reached the position where we are preparing to ballot you for industrial action. This is not a step we are taking lightly. We have delayed for long enough to give the employer the chance to join with us in an effort to remedy the matter. But instead, the employers have failed to address our concerns. We are of course more than aware of the impact that an industrial action ballot involving union employees will have. However, we believe that in this case, just as with some of the worst employers, the employer has relied on this exact point. The fact that your employer is a trade union does not absolve it of its responsibilities — if anything the expectation is that it should be a model employer. This is certainly not the case at the GMB.

Let me provide you with this assurance. The employer will have plenty of time to come to its senses. You will all know that a ballot involves giving notice of a ballot, a ballot period followed by 14 day notice of any planned action. We will use this period, together with the mandate from a yes vote in a ballot, to do everything we can to reach an agreement.

However, the employer now needs to know that we are prepared to take the appropriate action to defend our members and our representatives. It is for this reason that we are preparing to ballot you for industrial action.

We will soon be making arrangements for meetings for our members to discuss the above. I will be back in contact again with further updates including details for meetings.