The UK retailer is accused of greenwashing harmful products as action against salmon-farming ramps up. 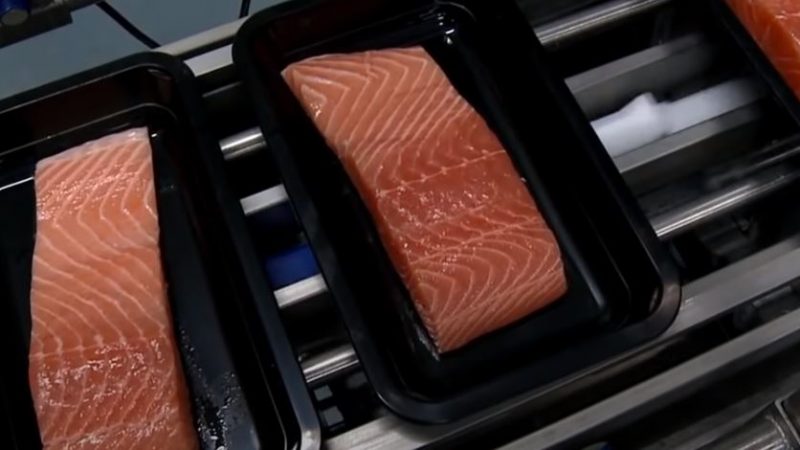 A campaign by the British not-for-profit political-activism organisation 38 Degrees is aimed at stopping the iconic UK retailer from selling tens of thousands of tonnes of factory-farmed salmon, despite warnings from scientists that the practice leads to environmental damage.

Almost 100,000 people have signed a petition calling for the retailer to come clean about farmed salmon and the environmental damage it causes.

Factory-farmed salmon is beset with concerns over poor animal wellbeing and the environment. One of the biggest worries is that salmon farms pollute waterways and the diseases that affect the salmon of farms can be transferred to the wild animals that swim past the cages.

Another leading concern is that farmed salmon can be toxic, releasing cancer-causing polychlorinated biphenyls (PCBs), which bioaccumulate up the food chain, infecting carnivorous marine life. In the wild, salmon is dramatically declining.

One study warns that orcas around the world are in danger from a range of toxic chemicals released by industrial corporations.

In an open letter to Steve McLean, head of agriculture and fisheries sourcing at M&S, Matt Mellen, founder of the online magazine Ecohustler, notes how for ethical shoppers who want to reduce their environmental impact, we must avoid factory farmed food.

Mellen makes reference to the “large quantities of factory-farmed salmon” M&S are selling and highlights how the retailer is marketing the food as “responsibly sourced,” something which the environmentalist labels as ‘dire.’

“You are greenwashing harmful products and ignoring the ocean emergency so many of us want major companies to step up to and address,” writes Mellen.

Argentina is the first to ban salmon farming

More people speaking out against salmon farming. Argentina recently became the first country in the world to ban the practice. Earlier this month, Tierra del Fuego, the southernmost province in Argentina, unanimously approved a bill banning salmon farming in open-net pens. The practice was considered by Argentina as a threat to the county’s economic and the environment.

According to 38 Degrees, companies like M&S have the “money and resources to throw at keeping a story like this quiet.”

Social media is alight with people showing their support towards the banning of factory farming in Argentina and towards 38 Degrees’ campaign.

“Argentina’s ban on farmed salmon is great news for our oceans, and comes as more than 80,000 38 Degrees members have signed the petition calling on the iconic British retailer Marks & Spencer to come clean about the environmental damage caused by their intensively farmed almon,” wrote one Twitter user.

Another urged M&S to own up about the damage caused by their farmed salmon.

“Factory farms are bad for the environment and for animal welfare – don’t call them “responsible.”

38 Degrees is calling on ethical shoppers to sign the petition and to make a donation to leave M&S in no doubt that their customers want to stop the company from labelling factory-farmed salmon as “responsibly-sourced.”