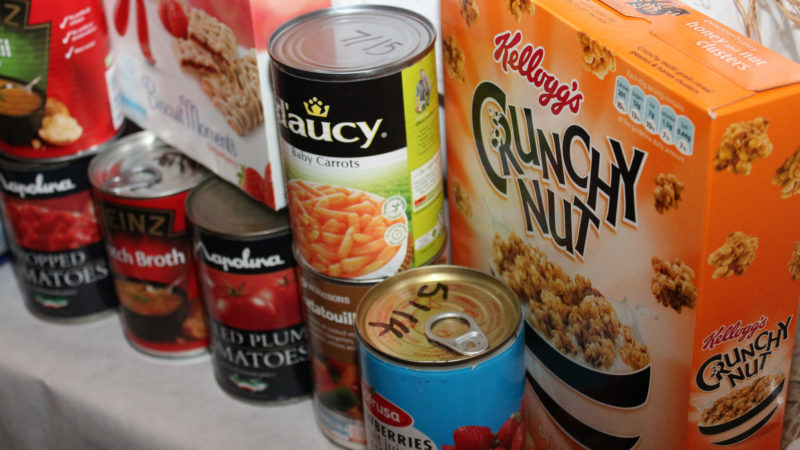 A new map has revealed areas of the UK where people struggle most to afford or access food, with one in six local authorities experiencing one and a half times the national average for rates of hunger.

One local authority has 14 percent of people who are classed as hungry and nearly 30 percent struggling to access food.

The issue of food poverty is not only about people going hungry; it also includes people who must shrink or skip meals, those who cannot afford to include any healthy foods in their diet and those who must bare the mental strain of trying to make budgets stretch.

For the first time researchers were able to identify food insecurity at local authority scale across three categories, from those experiencing hunger, to those just one emergency away from going without food.

Almost half of local areas in Northern Ireland and in Yorkshire and the Humber have very high percentages of people who were hungry in January, according to the new study from University of Sheffield.

In each of the four countries, levels of food insecurity varies, but England has the greatest variation between the areas of best and worst food security.

It’s hoped these new stats will urge local authorities and government agencies to address the problem.

Researchers at the University of Sheffield Institute for Sustainable Food modelled data from the Food Foundation, who surveyed people across the UK, and for the first time were able to identify food insecurity at a local authority scale. Local authority percentages show the marked variation in levels of food insecurity between local areas whereas national and even regional averages hide this difference.

In January 2021, 4.2 per cent of adults across the UK reported that during the previous month they had been hungry but unable to eat at least once, but the problem is much worse in some places with nearly one out of every ten adults going hungry.

This new analysis of the national data collected during the pandemic goes further to assess the problem at a local authority level and breaks down experiences of food insecurity into three distinct groups, mapping them for the first time:

Data, represented on a map of the UK identifies which local authorities are most affected within all four nations of the UK.

This is followed closely by Hull with 13 per cent of people being hungry and more than one in five adults who struggled to access food.

The local area with least hunger, struggle or worry is St. Albans in Hertfordshire.

Food insecurity is the inability to consistently afford, access and utilise the food needed to maintain good health and wellbeing. The problem has become well known in recent years due to the rise in reporting on food bank usage in the UK; the Food Foundation has been tracking household food insecurity UK-wide showing more people living with the daily effects of poor diets and limited food access.

Typically measures of moderate and severe food insecurity use three indicators: skipping meals for a whole day or more, not having enough food and going hungry, and shrinking or skipping meals with 7.4 per cent of adults reporting one or more of these experiences in the one month running up to January 2021.

The second indicator comprises the Hungry measure. The estimates for the struggling with food access measure include those who skipped or shrank meals, and also includes those who indicated that they sought help when they were food insecure, and those who gave a reason for not having enough food.

The worry measure is not generally included in other estimates of food insecurity; however, this group is likely to be at increased risk of food insecurity. They will struggle to include healthy food in their diets and be bearing the mental strain of trying to make their budgets stretch.

Dr Megan Blake from the University of Sheffield Institute for Sustainable Food, who collaborated on the work, said: “This new map, for the first time, makes visible the patterns of food insecurity across the UK. While no one should have to go hungry, struggle to get or worry about having enough food, in some places it is at proportions that are especially shocking, particularly as we are a wealthy country. If we are going to recover from Covid-19 we must address this problem.”

The new data shows how not everyone living with food insecurity experiences hunger on the same level, making apparent that an alarmingly large number of people also actively plan to go without food to make ends meet, or worry about doing so. The burden of these forms of food insecurity also immediately threatens people’s health and wellbeing.

For some, living on the edge of food insecurity may mean an event such as a car or boiler breakdown or an unexpected illness, could be the tipping point that squeezes their food budget, and they have to plan to eat less, or skip meals altogether.

This in turn can be linked to higher rates of illness and obesity due to people buying cheaper foods, which store longer and are more filling, over healthier choices.

Kris Gibbon-Walsh, from FareShare said: “The best way to become food secure is to have the health and money to go to the shops, buy the nutritious food you need for your family and the knowledge to cook it. People should not need to rely on charity to access food, however charities can do a huge amount of good work with food to support their communities, bring people together and stop them becoming food insecure in the first place.

“Having a map of food insecurity in the UK allows FareShare and other food organisations to understand the geographical implications of where we send our food and make decisions, not only about where the food goes, but also how the local foodscape can best support its community out of food insecurity.”

Anna Taylor, Executive Director, Food Foundation said: “We’ve known from tracking food insecurity at a national level during the pandemic that Covid-19 has pushed households across the UK further into hardship and forced a newly vulnerable segment of society to seek help for the first time.

“Local authorities have played a leading role in strengthening charitable food provision for the vulnerable during the crisis and many now have a good understanding of levels of need in their area. But this new study makes clear the variation in food access and vulnerability to food insecurity from one local authority to the next across the UK.”

Dr Megan Blake, added: “We hope this clear breakdown of the data will be a useful resource for local authorities and the government to use to address the challenges facing all people living with food insecurity, and that help can be tailored and targeted to those communities who need it, as the answer is not as simple as opening more food banks.”

“Food insecurity is undermining our chances of recovery after Covid-19. We need to urgently address this issue that pervades so many of our communities. No one should have to be hungry.”