From today, frontline NHS and social care staff in England won't have to isolate after being pinged by the app 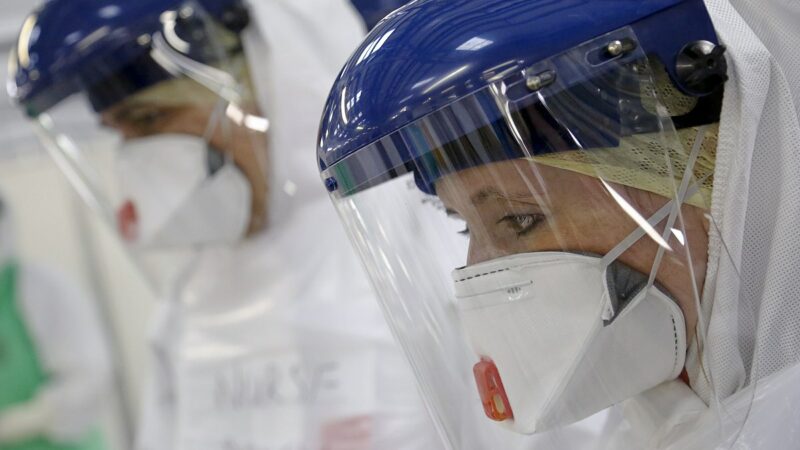 Members of the GMB Union are “appalled” at the government’s decision today to exempt health and social care workers from having to self-isolate if they get pinged by the app.

The government website states that from today (July 19), frontline NHS and social care staff in England who have been told to self-isolate will be permitted to attend work in exceptional circumstances and replaced by testing mitigations.

This will include staff who have been contacted as a close contact of a case of Covid by NHS Test and Trace, or advised to self-isolate by the NHS Covid-19 app – in other words, anyone who gets pinged.

In response to the government’s announcement, a GMB nurse has shared their concern, explaining that patients are “vulnerable” and “we will kill them” if they catch coronavirus and infect them.

Holly, a mental health nurse from London, said:  “This decision shows how little regard this Government has for frontline workers’ safety and well-being.

“It also demonstrates the staffing crisis is so desperate we will be forced to put ourselves, our colleagues and our patients at risk in a desperate move to plug the gaps of a national recruitment crisis.

“Yet outside of work we can sit in isolation? Their complete disrespect cannot continue.”

Martin, a nurse from Barnsley, added:  “We are critical front-line staff but we’re only worth 1%.

“We are ok to go to work but not out to play. All of our patients are vulnerable. They are in hospital because they are ill. If we infect them, then it will kill them.”

Paul, a paramedic from the North West, said:  “One rule for one and another for NHS and care staff.

“I think it’s a disgrace to even to consider it. What about all the people they will come across during work? Surely the idea is to stop the spread.

“Once again the Government on the take and only 100 days behind with this year’s pay deal.”

“Yet today – the Government’s so called Freedom Day – they have had to issue exemptions for staff as services struggle to cope with rising cases.

“Ministers have no regard for the welfare of staff at all. That’s apparent, as the guidelines only exempt staff from self-isolation to attend work, and not outside of work.

“If this is a safe thing to do, why does it also come with the caveat of not being able to work with clinically extremely vulnerable people?

“All of this when NHS workers are burnt out and there is still no announcement on their pay increase which was due in April.”

Patricia Marquis, Royal College of Nursing acting England Director said: “The message from government will be confusing to health and care workers who have spent over a year doing their best to keep the people they care for safe from infection.

“They are forcing health and care workers to act against their better judgement and risk infecting the people they care for. This doesn’t just make nursing staff unvalued, the Government is risking patient safety.”

“We must see the evidence behind this position, including how many staff will be affected.”