Even Tory voters want an official probe into the scandal, polling for LFF reveals. 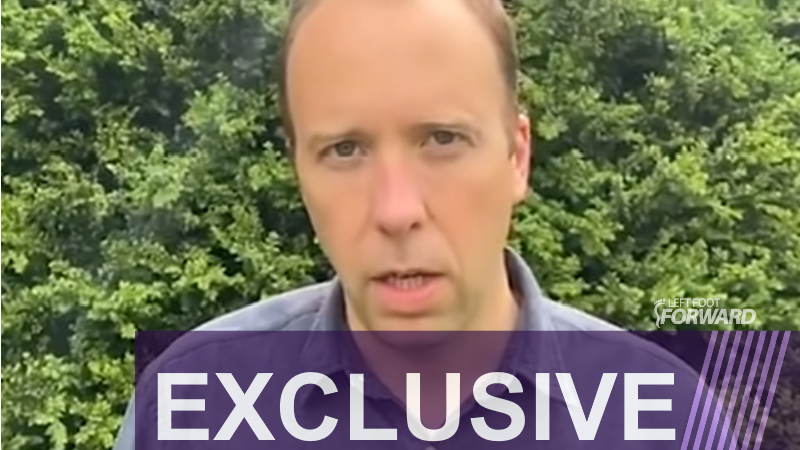 Voters back an investigation into whether disgraced former health secretary Matt Hancock broke the ministerial code, after hiring an aide he was later found to have an affair with, LFF can reveal.

Hancock was accused of breaching Covid rules after The Sun published CCTV images of him kissing and embracing lobbyist and aide Gina Coladangelo in his Whitehall office on the 6th May – 11 days before government guidelines changed to allow intimate contact with people from other households.

Hancock had previously failed to declare he had appointed Coladangelo as an unpaid adviser at the Department of Health, and later as a non-executive director role on its board – entitling her to between £15,000-20,000 per year in public funds.

The then-Health Secretary apologised under pressure, with Boris Johnson declaring the matter ‘closed’. But Hancock was forced to quit after public anger rendered his position under untenable.

Opposition parties called for an independent probe into the scandal, which erupted at the end of June, with SNP MP Kirsten Oswald saying an investigation was vital to “shine a light on Tory cronyism” – or trust in the UK government will be further eroded.

Tory Justice Secretary Robert Buckland told Sky News that an investigation was “a matter for the Cabinet Office,” but no investigation appears to be forthcoming.

Now polling by Savanta ComRes for Left Foot Forward has revealed that 58% of voters believe there should be an investigation into whether Matt Hancock broke the ministerial code, to just 27% who disagree.

Damagingly for the government, a majority – 50% – of Conservative voters also back an official investigation, to just 37% who disagree. The figure rises to 73% of Labour voters supporting a probe.

The calls for an independent investigation are consistent across all age groups, and all parts of the UK, though anger is highest in the North East, with 65% of voters there backing a probe into the affair. A majority – 57% – of people in Yorkshire and the Humber also back an investigation, with the Hancock scandal thought to be a factor in Kim Leadbeater’s Labour victory in last week’s Batley & Spen by-election.

Jonathan Bartley, co-leader of the Green Party of England and Wales, told Left Foot Forward: “When a Government minister is caught in an act of such slobbering hypocrisy, it’s no surprise that the public wants accountability. We saw it with last year’s eyesight test in Barnard Castle, and we see it again with this flagrant breach of social distancing.

“With all the sacrifices we’ve made individually and collectively, we won’t stand for there being one rule for the elite and their mates, and another set of rules for the rest of us. Hancock has clearly breached the ministerial code, and he should be investigated.”

Dr Jacky Davis, author and member of Keep Our NHS Public, said Matt Hancock broke his own rules over social distancing: “People naturally resent the implication that there is one rule for us and no rules for those in power. And we know that the public feel less inclined to follow the rules when they see those in power flouting in them.”

She added that ministers should be held to the same – if not higher – standards than everybody else: “Hancock should be investigated for breaking his own rules; in his position, saying sorry is just not adequate.”

Unite national officer for health Colenzo Jarrett-Thorpe called for a full, independent and transparent inquiry into the conduct of the ‘disgraced’ ex-minister: “It should go right back to the beginning of the pandemic, starting with the awarding of PPE contracts to the ‘friends’ of the Tory establishment, and also exploring how Gina Coladangelo obtained a senior post within the NHS, and whetther the proper appointment procedures were scrupulously followed in her case.”

In addition to the affair, the Sunday Times reported that Matt Hancock “routinely used a private [email] account to conduct government business” – concealing information from government officials and the public, including over multi-million pound covid contracts.

Hancock had already been found to have breached the Ministerial Code after a company that he part-owns with his sister was awarded NHS approved supplier status.

After the scandal erupted, Labour’s Deputy Leader and Shadow Chancellor of the Duchy of Lancaster Angela Rayner wrote to the Prime Minister, Cabinet Secretary and the government’s Independent Adviser on Ministers’ Interests, Lord Geidt, to demand an investigation.

The question asked was: Health Secretary Matt Hancock resigned last week following a story that he had an affair with someone he appointed as an adviser in the Department of Health. Which of the following is closest to your view?

The poll was prepared by Savanta: ComRes, with fieldwork Conducted between the 2nd – 4th July 2021.