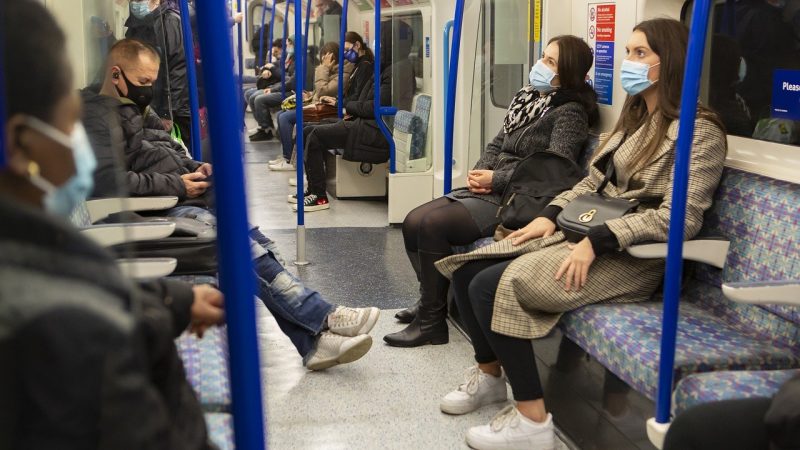 Transport for London (TfL) is unable to levy fines for people not wearing masks on London transport, Left Foot Forward has learnt.

After the government’s decision to make mask-wearing voluntary from the 19th July, regional leaders including London mayor Sadiq Khan hit back by keeping face masks compulsory on their travel networks.

But TfL has confirmed to LFF that it can no longer issue Fixed Penalty Notices against people refusing to wear a mask on the London travel network. Instead, staff can only refuse service.

Between July and September last year, Transport for London issued almost 500 fines to people not wearing face coverings on public transport, the BBC reported – a key plank in ensuring compliance with the policy.

The potential lack of enforcement will raise fears over the spread of Covid in London transport, as the UK moves deeper into what Boris Johnson admitted was a ‘third wave’ of infections at PMQs.

In ‘normal’ times, there are 100 million journeys per month made on the London Underground alone. Currently, Tube ridership is around 40-45 per cent of pre-pandemic levels and bus ridership at around 60-65 per cent. Mask-wearing is known to be highly effective at preventing the spread of respiratory viruses like coronavirus.

TfL customer research from 2 May to 29 May 2021 showed that 86 per cent of customers say they were wearing face coverings at all times on TfL public transport services – though this is likely to have dropped since.

There have been anecdotal reports of more Londoners refusing to wear masks on the tube, as noted by Politico on Tuesday.

LFF understands that around 400 uniformed officers patrol TfL’s network at all times of the day, though these staff will have to deal with a range of issues not necessarily related to mask-wearing.

The publicly-owned body will be focusing on a soft ‘educational’ approach – asking customers to put on a mask – rather than removing them from travel.

A TfL spokesperson said: “Wearing a face covering on our services and stations remains a requirement under TfL’s condition of carriage.  Frontline transport staff will continue to remind customers of the rules. They will be supported by our enforcement officers, and those of operators, who will be undertaking enforcement and compliance activity across the network. Non-exempt customers who fail to comply may be refused travel.”

Labour’s transport spokesperson, Elly Baker AM, told Left Foot Forward she was confident Londoners would keep wearing masks but that the issue will be a ‘concern’ that will need close monitoring now all legal restrictions have ended.

She said: “When the Government regulations lapsed, the issuing of fixed penalty notices lapsed with it – but TfL has done what it can and made wearing a face mask a condition of carriage. Under this, TfL enforcement officers can still ask someone to leave the network and prevent them from travelling.

“A relatively small number of fines have been issued by TfL over the last year. What will really help compliance is reminders to passengers, support from staff and Londoners seeing fellow passengers continue to wear masks in order to protect others.

“The thing I am most concerned about is the lack of consistency around face mask requirements on other services outside of TfL’s jurisdiction and this is because of the Government’s refusal to put through the necessary national legislation”.

The government knew that making mask wearing voluntary would lead to usage dropping off – and a high risk of increased transmission. If Tory MPs are anything to go by, they’re not listening to the PM’s call for everyone to keep wearing masks in crowded spaces, now that there’s no sanction…