It's not as simple as radicals against a moderate, writes Alex Maguire. 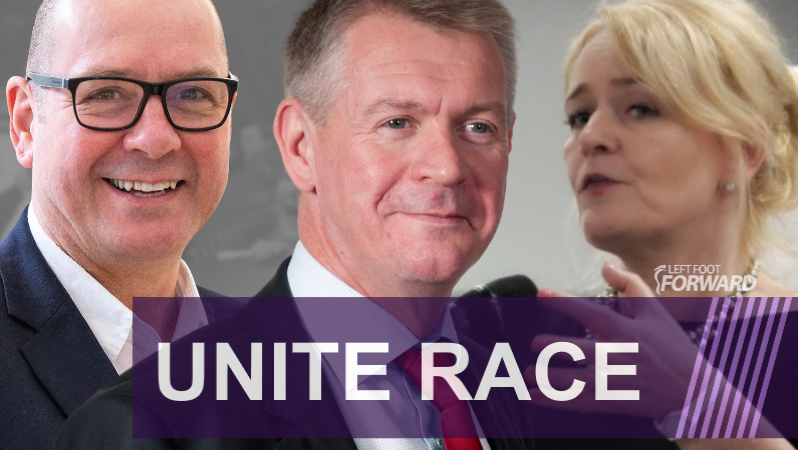 Contrary to much of the coverage –  and the candidates’ own statements – the Unite leadership contest is not as simple as two left candidates, Sharon Graham and Steve Turner, vs one right candidate, Gerard Coyne.

Although the left/right divide may accurately describe the politics of these candidates, it does not tell us much about how the vote will split.

Traditionally, the main internal divides within trade unions have commonly been between the rank-and-file membership and the national leadership, or at least between institutional incumbents and reformers.

An ‘institutional candidate’ is a person high up in the union who has an active role in directing how it operates. They are often a deputy general secretary (as was the case with the recent winners in Unison and GMB). Reformers come in two broad shapes, either a mid-ranking official who has had little say in how the union is run at nationally, or a rank-and-file workplace organiser who is not a paid union officer, but a volunteer activist unencumbered by the privileges and constraints of power (for instance Giovanna Holt in GMB and Paul Holmes in Unison respectively). Rank-and-file candidates tend to perform well in elections, much better than their profile suggests they should.

In the Unite contest, Turner, who ran McCluskey’s last two election campaigns, is the institutional incumbent. He is a deputy general secretary and, after Howard Beckett’s withdrawal, is supported by a unified United Left faction. United Left has run Unite since 2010 and is the most institutionally powerful group within Unite. The reason that Beckett and Turner were able to come to an agreement is because they are both of United Left.

Graham and Coyne (who challenged McCluskey in 2017) are the ‘reform’ candidates. They both promise a change to the way Unite operates and a rhetorical and financial refocussing on the workplace away from Westminster. Graham is part of the Workers Unite group, which is made up of a combination of new activists and disgruntled former United Left officers who think the union needs to change. While Coyne is nominally a rank-and-file candidate, as he was fired from his position as regional secretary in 2017 [Coyne branded the process a ‘show trial’], he does not present himself as one.

There is no rank-and-file candidate this election. Although the 2010, 2013, and 2017 Unite elections had a rank-and-file challenger (Jerry Hicks in 2010 and 2013, and Ian Allinson in 2017), this one does not, due to the increased number of branch nominations required to get on the ballot this time. Allinson would nominally have been ‘left’, but his his campaign in 2017 was in direct opposition to McCluskey and Untied Left. That the union institution has now made it impossible for a rank-and-file candidate to run highlights that the real divide is between it and the rank-and-file.

Rightly or wrongly, most members see trade unions as service providers; thus, turnout in elections is low. In the last three Unite elections turnout was 15.8%, 15.2%, and 12.2%. Low turnout means that elections are effectively decided by who can mobilise/organise the most voters at branch level; this requires a strong network of workplace activists and mid-level officials. Consequently, institutional candidates have an advantage over everyone else as they have the most contacts/activists across branches.

The dynamics of the shopfloor are integral to trade union elections and the importance of the social nature of the workplace for trade union organisation, and the machine politics it fosters, cannot be exaggerated. That means the number of branch nominations a candidate receives does not accurately indicate how many votes they will win. One well organised and large branch will provide more votes than several small ones. Therefore Turner, as the head of Unite’s manufacturing sector, has a considerable advantage.

Equally, workplace issues, and the union’s response to them, will shift members’ votes more than left/right rhetoric. Graham, as head of Unite’s Organising and Leverage Department is well-placed to win votes as she has a recent track-record of sustained success in industrial disputes and the active local networks of activists that arise from victories in industrial conflict. This means that Graham may take votes off both Coyne and Turner; indeed, we still do not know how much of Coyne’s vote was pro-Coyne instead of anti-McCluskey. If this happens, all three candidates could receive a similar number of votes.

Even if this does not happen, it is unlikely that Turner and Graham will split their votes evenly while Coyne’s remain intact. Much likelier is that the two reform candidates, Graham and Coyne, will split each other’s vote while the United Left machine will ensure that Turner’s vote remains largely intact. Either way, Turner, as the institutional candidate, should be the favourite to win. The house always wins.

Alex Maguire has conducted research on trade unions and has written for publications including LabourList, The Fence, Social Review, and Red Pepper.