The Greens are rising up the polls following local election success - which means more scrutiny of their leadership. 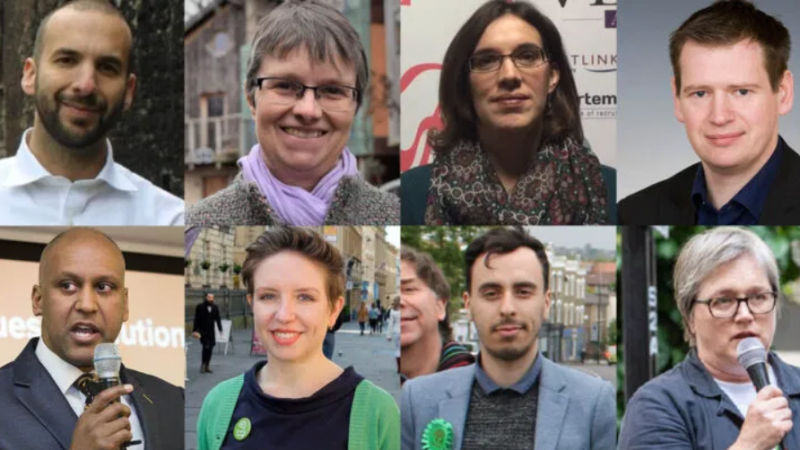 The Green Party of England and Wales has announced its new spokespeople.

According to the party, the list of 13 figures are ‘experts’ who are ’embedded into grassroots movements’, who will support the Greens’ leadership team in taking the party’s message to the public.

Green Party co-leader Jonathan Bartley revealed the spokespeople at Calthorpe Community Garden in Kings Cross, London this morning. Speaking on the announcement, Bartley said the team were ‘megaphones for a movement’.

The announcement comes just a month after the party achieved the second best local election results in its history. Greens made 99 gains in council contests this May, and added a third member of the London Assembly to their tally for the first time since 2000. A YouGov poll last week put the Greens on 9%, three points ahead of the Lib Dems.

The Greens’ new spokesperson list comprises some familiar faces, some newcomers and some who have come back into the fold after a few years of relative absence. Here’s the list:

Jack Lenox was recently elected as a Councillor in Lancaster in May’s elections, where he is now part of the ruling administration which took power from Labour. Lenox is a software developer by trade, having worked as principal engineer at Automattic and with a background in sustainable software engineering.

Zack Polanski was elected as the Greens’ third member of the London Assembly in May – joining Green Party co-leader Sian Berry and Caroline Russell in City Hall. During the campaign, Polanski was a vocal supporter of striking care home workers’ demands for fair pay and conditions. He has previously worked as an actor and a hypnotherapist, and was once a London Assembly candidate for the Liberal Democrats.

Molly Scott Cato was a Green MEP for six years, representing the South West England region from 2014-2020. Her time in the European Parliament is perhaps best known to the public for her infamous put down of a Brexit Party MEP.

Scott Cato is a professor of green economics at Roehampton University, and has published a number of books including ‘Green Economics, The Bioregional Economy’ and the controversially titled ‘Arbeit Macht Frei and Other Myths About Work’.

Carne Ross worked for fifteen years in the foreign office as a diplomat. He resigned in 2004 after giving evidence to the first official inquiry into the Iraq War, in which he claimed that at no point in the run up to the war did the UK or US deem Iraq’s weapons to be a threat. Ross has since set up the diplomatic advisory group Independent Diplomat.

Zoe Nicholson is currently the deputy leader of Lewes District Council. She has previously served on the Green Party Executive in the position of management coordinator, and was the 2018 recipient of the Sussex Business Woman of the Year Award.

Peter Cranie is a university lecturer and active member of the UCU union. Active in the Green Party since 2002, he was the lead candidate for the Greens in the 2009 and 2014 European Elections in North West England. In 2009 he came just 5,000 votes short of being elected and preventing then BNP leader Nick Griffin from taking a seat.

In 2012, Cranie also ran for the leadership of the Greens, coming second to Natalie Bennett. Cranie picked up 41% of the vote to Bennett’s 59% in the final round of counting.

Carla Denyer is a Councillor in Bristol and was the Greens’ candidate in Bristol West in the 2019 General Election, coming second and picking up 25% of the vote. On Bristol City Council, Denyer proposed the first motion to declare a climate emergency in Europe, which committed the city to reach carbon neutrality by 2030.

Denyer has also worked as a renewable energy engineer, specialising in both onshore and offshore wind technology.

Vix Lowthion has stood three times as the Greens’ parliamentary candidate in the Isle of Wight – in 2017 receiving the second highest vote share of any Green candidate in the country. She has been the Greens’ education spokesperson since 2016, over which time she has built relationships with the UK’s teaching unions. Lowthion also works as a secondary school teacher.

Benali Hamdache is a previous co-chair of the LGBTIQA+ Greens and was fourth on the Greens’ list for the 2021 London Assembly elections. He was also the Greens’ campaign manager for that Assembly campaign, as well as for the concurrent Mayoral campaign.

Hamdache’s has held a number of jobs in campaigns and the third sector, including a stint working for Britain Stronger in Europe during the 2016 EU referendum.

Jonathan Elmer is a newly elected Green Party councillor in Durham. Elmer has worked as a consultant ecologist and is a member of the Institute of Ecology and Environmental Management.

Shahrar Ali served a term as deputy leader of the Green Party from 2014-2016. He unsuccessfully stood for re-election in 2016, coming third behind Amelia Womack and Andrew Cooper. He has since stood to be the party’s leader, coming second in 2018 and third in 2020. In both contests he lost out to the co-leadership bid of Jonathan Bartley and Sian Berry.

Ali authoured the 2015 book Why Vote Green and was fifth on the Greens’ list for the 2021 London Assembly election. He also works at the Institute of Health Sciences Education at Queen Mary, University of London.

Caroline Russell has been a member of the London Assembly since 2016, where she leads the Greens on transport, the environment and the economy. She has also served as a Councillor in Islington since 2014. Throughout most of her term on the Council, she has been the sole opposition Councillor.

In 2018, Russell became chair of the London Assembly’s Environment Committee and has since led investigations into farming in the green belt, Heathrow’s proposed third runway and air pollution.

Catherine Rowett was a Green Party MEP from 2019-2020 and previously served as the party’s spokesperson on animal rights. She is currently the deputy coordinator of the Eastern Region Green Party and is a Professor of Philosophy at the University of East Anglia. Her academic work has focused on Ancient Greek philosophy, particularly the pre-Socratics and Plato.

Most of the appointments to the Greens’ list of spokespeople went ahead with little fanfare. However, Shahrar Ali’s appointment to the policing and domestic safety brief has proved controversial.

At the time of writing, the Green Party’s tweet announcing Ali’s position had attracted over 80 quote retweets. The vast majority of these highlight allegations of transphobia which Ali has faced over a number of years, most significantly during his second bid for the leadership of the party in 2020.

During that campaign, he stood accused of having advocated a definition of women which was trans exclusionary, and his centreing of the “rights of women to same sex spaces” in his campaign launch led to allegations by some party members that he was engaging in a “transphobic dog whistle”.

This criticism of Ali’s appointment comes just a day after the party revoked rugby player Ross Peltier’s candidacy for the forthcoming Batley and Spen by-election, following the uncovering of historic social media posts widely condemned as being homophobic and sexist. [Peltier said that he ‘understands and respects’ the decision].

Among those criticising Ali’s appointment, many complained of an apparent difference in approach in the treatment of Peltier and Ali.

One Green Party member making this connection implied Ali was “openly transphobic” and that the decision to appoint Ali was “appalling”:

Kelsey Trevett, the equality and diversity officer for the Young Greens – the Green Party’s official youth wing – said that Ali was “unfit to represent the party” given his alleged attempts to “move the party backwards in [sic] regards to trans rights”.

Responding to these allegations, Ali said he was “humbled” to have been appointed as a spokesperson and said he would fight for the rights of LGBTIQA+ people. He said: “I have fought for the human rights of the marginalised and voiceless in our society for decades, and will continue to do so, for the LGBTIQA+, disabled and ethnic minority communities and for the rights of women and children, too.

“I will engage with all who wish to have a mature, respectful debate about equalities legislation or the impact of its reform on the well-being of all, within the best tradition of green politics,” he said.

A spokesperson for the Green Party told Bright Green that all of the newly selected spokespeople – including Ali – had signed a code of conduct committing them to “fairness, tolerance, equality, diversity and inclusiveness”. They added: “The Green Party is unequivocal in its support for trans rights. We recognise that trans women are women, trans men are men, and that non-binary identities exist and are valid.”

Green Party conference voted in favour of a motion earlier this year which supported the introduction of self-identification for gender recognition certificates.

Chris Jarvis is a Green Party councillor, editor of Bright Green and is the new Head of Strategy and Development at Left Foot Forward.

This is an edited version of a piece first published by Bright Green.