The direct action group is gearing up for a weekend of action, against the mainstream media's failure to report fairly on the climate crisis. 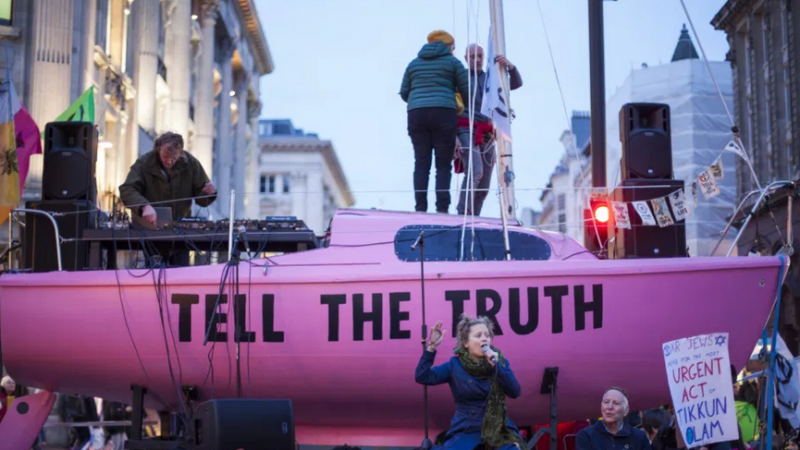 Extinction Rebellion (XR) has hit out at the Daily Telegraph for alleged ‘falsehoods’, following an article criticising the climate group’s protest plans.

On Saturday, the Telegraph published a piece by their associate editor Gordon Rayner about Extinction Rebellion’s upcoming Free the Press actions, which will see civil disobedience against what XR brands the ‘corrupt billionaire press that profits from our division’.

XR is launching a weekend of demonstrations from the 26th June, against media outlets which they say ‘consistently fail to tell the truth on the climate and ecological crisis’.

Sunday will see a march on Parliament Square, with speeches from Jeremy Corbyn MP, Black Lives Matter, the Gypsy Roma Traveller & LGBTQ communities, and the Media Reform coalition. “We’re bringing thousands onto the streets of London to demand radical change and hold the mainstream media to account,” XR said in a statement.

Saturday’s Telegraph article warned that ‘police failure to come down hard on Extinction Rebellion will be a surrender to mob rule’.

The piece argued that XR ‘will try to persuade, intimidate, or simply prevent you from buying your daily newspaper’ in an ‘watershed moment in the culture war’. It claimed that XR figures had encouraged activists to cause damage of more than £5,000 each at the weekend, in a bid to force prosecutions to go to the Crown Court.

Now Extinction Rebellion have issued a point-by-point rebuttal of the article, challenging claims of:

Mob rule: “Extinction Rebellion never uses violence and intimidation so you might want to scrap that one next time,” XR says.

‘Police standing by’ while XR took illegal actions: XR says “the Assistant Chief Constable in Hertfordshire ordered the removal of protesters from in front of the Murdoch owned printworks in Broxbourne on the say-so of the Home Secretary before he had received any information from the officers at the site.”

A culture war: XR – “the culture war only exists because of articles like this. Extinction Rebellion is interested in the media telling the truth about the climate and ecological emergency… It’s dialogue we’re after, not culture wars.”

Police letting ‘illegal’ road closures go ahead: XR says – “The problem with this is thatthe disruption of roads for the purpose of protest is not illegal per se. People have a legal right to protest, and it is accepted by the courts that this will include disruption. The police’s job is to balance the rights of the protesters with those disrupted.”

In paragraph 10 the Telegraph author asserts that “no one would deny the right to peacefully demonstrate with permission from the Local Authority – it is one of the cornerstones of democracy” – XR says: “Not quite! Actually, it’s a cornerstone of our democracy that we can assemble and freely express ourselves with or without permission from the Local Authority (see articles 10 and 11 of the European Convention on Human Rights)”

The rebuttal goes on to list 12 other alleged inaccuracies in the piece.

In September 2020, Extinction Rebellion blockaded News Corp printing presses for 13 hours, in a series of protests entitled ‘Free the Truth’.

The blockade led to 80 arrests and restricted the distribution of newspapers including the Telegraph.

The actions triggered a backlash from government and the media, with the Police, Crime and Sentencing Bill widely viewed as a direct response to XR’s actions. Labour also condemned the actions.