Instead of outrage at each step of Johnson's Brexit catastrophe, opponents must reveal and fight his whole strategy. 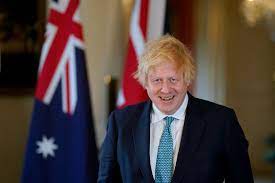 For all the outrage expressed by Boris Johnson’s opponents, few of them seem to do one of the basic things necessary to defeat him: work out what his plan is and develop an alternative strategy capable of beating it.

Johnson is, admittedly, a master of misdirection. Happy to announce a tunnel under the Isle of Man or send gunboats to the Channel Islands to create a day’s headlines when the occasion calls, or deny point blank that he is responsible for creating a trade border in the Irish Sea despite having celebrated doing so as a great success mere months earlier.

But the fact Johnson’s amateur dramatics are so patently designed to distract should encourage his opponents to investigate and expose his true strategy all the more, yet they repeatedly fail to do so.

Instead, they fall back on tired attacks on the ‘same old Tories’, which is one thing Johnson is not, or mistakenly assume that he is the buffoon he often presents himself to be. Either criticism lets him off the hook.

One result is that Johnson’s critics expend a great deal of energy attacking specific policies, statements or apparent missteps without attacking the strategy of which they are part. As a result, attacks fall flat while the strategy and its intended outcomes survive relatively unscathed.

This scenario is playing out yet again over the trade deal Trade Secretary Liz Truss is about to agree with Australia. This time Johnson’s opponents are aghast at the impact the deal will have on the UK farming industry.

Farming unions, environmental groups and opposition parties have spoken out against the deal, arguing that it would drive farmers out of business and endanger animal welfare, environmental and food standards.

Johnson’s critics are right. The zero-tariff and zero-quota deal proposed would allow Australia to export meat and other products produced to standards that fall below EU and current UK norms. It is cheaper to produce, hence UK farmers would be undercut, forcing them out of business.

The UK is not even likely to make much money out of the deal; the Department for International Trade (DIT) estimates that UK GDP will be boosted by only 0.025% over the next 15 years as a result of it.

“It is incredibly concerning that the Government is in a sprint to sign up to a trade deal with Australia that would have serious implications for British farming and would seemingly offer very little benefit to the economy,” said Minette Batters, the National Farmers’ Union president.

“Such a trade deal would represent a bitter betrayal of rural communities, undermining and undercutting our agricultural sector and would amount to a genuine threat to future viability,” said Ian Blackford, the SNP’s leader in Westminster.

That Johnson and Truss’ critics seem genuinely surprised to see another UK sector thrown to the wolves shows that they have learned nothing from the past two years. Farming joins fishing, manufacturing, financial services, the services sector more broadly and any importing or exporting business on the long list of UK sectors sacrificed to Johnson’s post-Brexit trade policy. Farming is unlikely to be the last.

Johnson’s critics miss the wood for the trees. He has no interest in protecting UK business sectors as they stood pre-Brexit. Had he done so he would not have negotiated the ultra-hard Brexit deal that he did, in full knowledge of its implications for the economy. He read the same impact reports as everyone else and decided to go ahead anyway. What few have done is ask why.

The answer is both electoral and economic. In electoral terms, hard Brexit has worked for Johnson as a vote winner. It enabled him to create an electoral coalition that won an 80 seat majority in December 2019 and, for the most part, continued to deliver in May 2021.

But Johnson knows that the alliance he formed between wealthy Brexit supporters in the south and their poorer compatriots in the north will be temporary without further input. It is already fraying, as local election results from Oxfordshire to West Yorkshire proved. Johnson did not get everything his own way, and he knows it.

But beyond the elections, Johnson has plans to transform the UK economy. He is content to destroy large parts of the economy built under the open access to the European Single Market because he aims to create a remodelled economy in its place. Criticising each act of destruction merely prevents opponents from recognising and calling attention to his intended destination.

“All of the actions, and most of the words, of the UK prime minister are completely consistent with having long ago made a choice to prioritise a UK-US trade deal over Northern Ireland,” wrote trade expert David Henig in April. “Such a deal has always had two preconditions, that the Good Friday Agreement was upheld, and the UK was free to diverge from EU food rules. Chlorinated chicken is not a joke in the US but a fundamental requirement for trade partners.”

The Australia trade deal follows the same logic. Free from EU food rules the UK can welcome substandard Australian beef and other food products. Johnson’s opponents may complain but there is nothing they can do about it.

He will care little that ardent Brexiters are now questioning their devotion (Isabel Oakeshott writes “I’m a free-trade Brexiteer but the idea of beef from this Australian mega farm in British shops appals me”) because the deal is done. The time for warning that hard Brexit could lead to low regulations and low standards is past; that world is here and Johnson and Truss intend to make full use of it.

“Johnson’s goal is presumably to go into the next UK election with a US trade deal having proved that Brexit worked. Just as he went into the last with an EU deal,” says Henig. “It might be appallingly cynical and extremely risky to peace [in Northern Ireland], but that seems consistent with his character, and indeed the Conservative Party.”

The Australia trade deal is just one more step away from the EU’s regulatory orbit and towards one similar to the US, where food standards and regulations – among many others – are lower. Johnson clearly believes that a raft of new trade deals will prove that ‘Brexit worked’ even if all possible trade deals combined, even including one with the US, have zero chance of replacing lost trade and resulting in prosperity lost due to our exit from the Single Market and Customs Union.

This explains Johnson’s lack of interest in the UK farming industry or the financial value of the deal to Britain. He is unlikely given US President Joe Biden’s less than favourable views of him, wider Democratic opposition to his destabilisation of peace in Northern Ireland and the mere time available to have a US trade deal in place by the time of the next election.

The Australia deal is a poor second best, but will doubtless be followed by similar deals with other low-regulation economies. A US trade deal is more likely to feature in Johnson’s election campaign as a sunlit upland dependent on a Conservative victory.

The British people are being sold a lie. All the trade deals in the world cannot make up for the loss of Single Market membership. Post-Brexit wrote three professors of global economics for the LSE, “the UK has no trade-enhancing alternative to an agreement with the EU that essentially mimics the situation in which the UK is a member of the EU”. There simply isn’t enough of the rest of the world to make up for leaving its largest trading bloc, particularly when it is on our doorstep.

Meanwhile, the price of Johnson permanently reducing the size of our economy is signing up to the low standards, regulations and food quality that the British public repeatedly say they don’t want. Johnson is selling them trade deals as victories that will simply make them poorer and less healthy than they would otherwise have been.

To beat Johnson Labour and other opposition parties should fight the war not the battle.

The way to beat Johnson is not to bemoan the loss of UK farming, which will in any case be denied by Johnson just as he denies the existence of the Irish Sea border, it is to make the case that trade deals cannot replace the Single Market, and that Johnson is asking us all to feed low quality food to ourselves and our families.

The UK public has shown little remorse over the pain felt by importing and exporting industries, fishing or other sectors hard hit post Brexit. There seems little chance that farmers will be the straw that breaks the camel’s back, except for those living and working in farming and their families. But many more people do care about food quality, more than they care about (or understand) GDP.

Understanding your opponent’s strategy and how you can counter it is not only basic warfare, it is basic politics. The opposition needs to wake up to Johnson and start opposing him before it’s too late, or the next election will be at least in part a celebration of trade deals that do nothing but make us poorer and less healthy.

Mike Buckley is Director of Campaign Central and a Labour adviser.