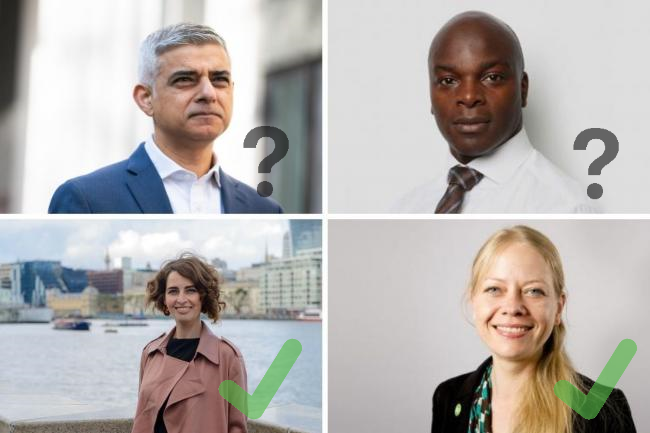 London mayoral candidates from five political parties have signed a pledge committing to resist the US health insurance giant Centene taking over 49 GP practices in the city – and mayor Sadiq Khan is not among them.

The pledge comes after Centene took over 49 GP practices responsible for over 300,000 patients in London earlier this year. This move has made Centene the largest single provider of NHS primary care in England.

Luisa Porrit from the Liberal Democrats, Sian Berry from the Green Party, Richard Hewison from the Rejoin EU party, Valerie Brown from Burning Pink and Vanessa Hudson from the Animal Welfare Party have all signed the pledge which commits them to “fight to take back our NHS GP practices from Centene and oppose any other takeovers by profit-driven private corporations.”

The ‘London Patient Protection Pledge’ has also been signed by candidates for the London Assembly from the Greens, Labour, Liberal Democrats, Reform UK, the Christian People’s Alliance and the Communist Party of Britain.

Currently, neither Labour’s Mayoral candidate Sadiq Khan, nor the Conservatives’ Shaun Bailey have signed the pledge.

Campaigners have expressed fears that Centene’s involvement in GP practices could diminish patient care and – in some cases – lead to the closure of practices.

They point to the closure of a Centene-run GP surgery in Harlow in 2018 to suggest that similar closures could take place across London. They also argue that private company involvement in GP practices inevitably leads to the ‘prioritisation of profit over patient care’, with research having shown that private firms running GP practices provide worse experiences of care. The ‘London Patient Protection Pledge’ was coordinated by campaign group We Own It.

LFF understands that We Own It tried to engage with Sadiq Khan, including writing to the mayor’s office and his political campaign team for a meeting, but they have not received a response.

We Own It’s campaigns officer Johnbosco Nwogbo told LFF it is ‘deeply worrying’ that the mayor has not taken the pledge, and ‘has not demonstrated much interest in the issue more generally’.

“We’ve been speaking to patients up and down London and they are very worried about what could happen to the care they get in their GP practices and whether that care will even be there in the long term. They need some real commitment from the Mayor. It is very sad that they are not getting that just yet. We are open to working with the Mayor on this issue,” he said.

Nwogbo added: “Centene’s takeover of our GP practices is absolutely shocking. When people turn up for an appointment with their GP, they expect to meet a local NHS doctor they can trust, not an employee of a massive American health insurance company. They expect their GP to be prioritising their health needs, not the bottom line of a multinational company.

“The reality is that whenever private companies are involved with our NHS, profit is prioritised over public health. So it’s imperative that this takeover – and all like it – is stopped in its tracks. That’s why it is so important that candidates seeking office in London commit to resisting Centene’s takeover and all NHS privatisation.”

We Own It is currently running a petition to stop Centene’s takeover of GP practices, which has gathered over 50,000 signatures. 74 MPs have also signed an Early Day Motion opposing the takeover, and on April 22 dozens of protests took place outside GP practices across London in opposition to Centene.