"The healthy life I enjoy every day is a testament to the grit and refusal to give up by HIV activists across the world." 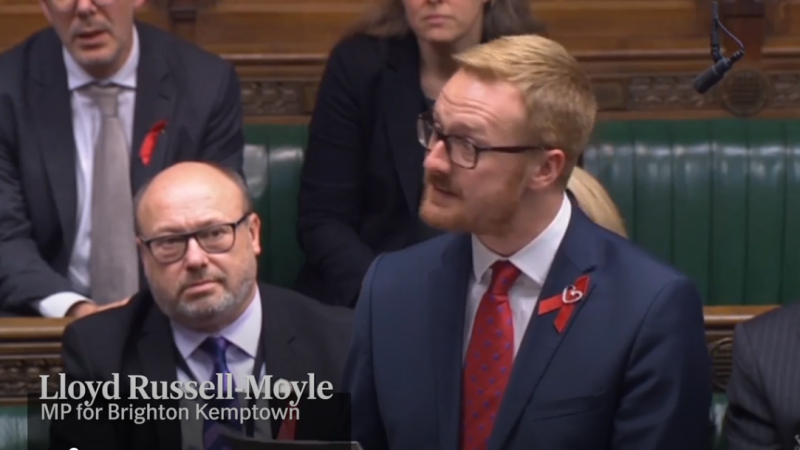 Two remarkable things have happened already this year which have helped turn the dial on HIV.

Thanks to Russell T Davies’ brilliantly powerful drama set at the height of the HIV epidemic the entire nation was finally talking about HIV and realising the abhorrent prejudice and discrimination that destroyed so many lives.

This spurred record numbers of people to order HIV tests during National HIV Testing Week at the start of February. Every test that was ordered helped chip away at the HIV stigma that continues to cast a shadow over public attitudes towards HIV.

As someone openly living with HIV, the response to the show and enthusiasm for HIV testing was beyond anything I could have expected. It was a far cry from the shame and fear I felt when I tested for HIV and received my diagnosis.

When I made my speech in the House of Commons ahead of World AIDS Day 2018 and spoke about being HIV positive, I wanted to play my part in showing MPs and the country that thanks to effective treatment HIV does not need to hold people back in life. I knew that if I could encourage just one person to go have an HIV test, then it would have been worth it.

But I also spoke out because I was determined that my experience of being diagnosed with HIV would become an experience others would not have to go through. That’s because we have the tools to stop HIV in its tracks. I take one pill a day and it keeps me and thousands of others living with HIV in the UK healthy and stops the virus from being passed on.

Since making my speech, I’ve often been asked what people can do to be better allies for people living with HIV. My answer has always been simple: take action. The course of the HIV epidemic has been changed for the better when people have taken action and come together.

From demanding the rights of people living with HIV are enshrined in equalities legislation – which was successfully achieved in the 2010 Equalities Act – to demanding proper access to the HIV prevention drug PrEP – which has finally been rolled out in England after years of government dither and delay.

But the job isn’t done. We have an opportunity to make history this year and make history by the end of the decade. That was the message during an inspirational speech from David Furnish at last night’s Brit Awards. He took to the stage to remind millions of people about the realities of HIV medication and ‘the fight goes on until we can banish stigma, ignorance, fear and the virus itself, forever.’

This couldn’t have been more timely to put pressure on the government which is finally – after months of delays – now drafting its HIV Action Plan which will set the course for ending new cases of HIV by 2030. Ministers have made this commitment which is scientifically possible. While I believe it will be a Labour Government that delivers this historic goal but we cannot wait until we are in office to start making progress.

Every week 80 people in the UK are diagnosed with HIV and people living with HIV are twice as likely to experience poor mental health. Meanwhile over half a million people still leave a sexual health clinic without having an HIV test – with women of colour most likely to miss out – and access to PrEP is still limited to sexual health clinics. The government can change this but we need to make them take action.

The healthy life I enjoy every day is a testament to the grit and refusal to give up by HIV activists across the world. When I take my pill every morning, I think about what they fought for – with many sadly paying the ultimate cost – so I and others living with HIV could live our lives to the fullest.

This should give us all the inspiration and determination to make 2021 also the year that we set course and begin the journey to end the epidemic once and for all.

Terrence Higgins Trust, Elton John AIDS Foundation, and National AIDS Trust have launched a new campaign to urge MPs to write to the Government to take action on HIV.

You can contact your MP here and ask them to write to the Health Secretary, Matt Hancock to urge him to ensure we have an HIV Action Plan that is worthy of its name.