Under the proposals - set out in the Queen's Speech - police forces would be handed sweeping authority to place restrictions on protests and public assembly. 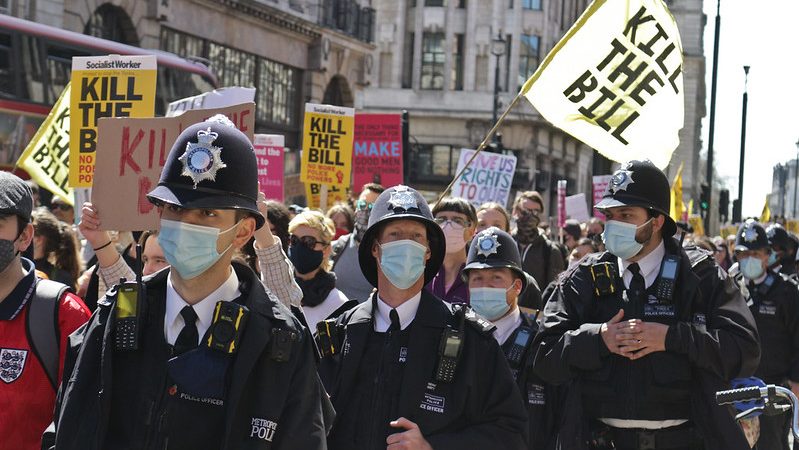 Campaigners have urged MPs to oppose the controversial policing bill, after the government confirmed it will be on the legislative agenda for the coming year.

The Police, Crime, Sentencing and Courts Bill (or policing bill) triggered widespread protest in April, and a new ‘Kill the Bill’ movement.

Under previous UK legislation, police had to show that a protest may cause “serious public disorder, serious damage to property or serious disruption to the life of the community” before imposing any restrictions.

Yet under the policing bill, police forces will be allowed to criminalise protests they believe constitute a “public nuisance”, including imposing starting and finishing times and noise limits.

They’ll even be able to consider actions by one individual as “protests” under provisions of the bill.

On Tuesday the government confirmed it would be a priority for the next year. CND General Secretary Kate Hudson told Left Foot Forward the government has brought forward this bill as a ‘direct attack on the right to protest’: “This is a hard won right that is fundamental to our democracy – and to all progressive advance in our society. We will not stand by and watch these rights eroded,” she said;

She added that the scale and diversity of opposition to the bill is ‘enormous’, from veteran campaigners, to politicians; from faith communities to trade unions.

“For CND, with a very proud tradition of fighting for change going back decades, that means working as part of the #KilltheBIll coalition and all those defending the right to protest. Defend our democracy – defeat the Bill,” she said.

Naomi Smith, CEO of Best for Britain, added: “This law would threaten the public’s right to protest and undermine Britain’s reputation on the world stage. It is deeply illiberal and undemocratic and we will continue to campaign to stop it.

“Every MP who believes in Britain’s role as a beacon of democracy and liberalism, including Conservatives, must oppose this draft law.

“We cannot criticise regimes around the world for shutting down pro-democracy protests while removing those very same rights at home.”

A spokesperson for renters group ACORN – which uses direct action to hold landlords to account – said: “We are deeply disappointed and concerned by the Government’s intention to push forward with their restrictions on protest despite mass opposition.

“The protest restrictions are completely undemocratic and would criminalise the majority of what ACORN does day to day to protect our members – we’re a direct action organisation and we take pride in that.

“These restrictions will simply exacerbate the power imbalances that already exist in society and we will intend to do all we can to stop the Bill being implemented, and even if it is we will not shy away from protecting our members and standing up for our communities. People power has delayed this Bill. We can still stop altogether,” they said.

The Queen’s Speech also included proposals to force voters to show ID – or be blocked from voting. Up to 3.5m people lack photo ID in Britain.

Former Remain and Leave organisations signed an open letter in March calling on the government to withdraw the bill “in its entirety”.

Joint letter on the policing bill

As long as laws are made in Parliament, then British people must have a legal right to protest them in Parliament Square. Democracy is not an ‘inconvenience’. Public opposition and dissent are among the hard-won rights that make our democratic and like-minded groups

This Bill seeks to silence British people when avenues to express dissatisfaction and opposition by members of the public are already limited. In a democracy, the role of government and the police should be to facilitate the organisation of demonstrations such that people are able to participate safely and legally whilst making their voices heard. This bill does precisely the opposite, and provides no route of appeal or challenge either in law or otherwise.

Seeking to limit noise levels so people cannot be heard, and preventing people from assembling outside Parliament so they cannot be seen – these are the words and actions of authoritarians.

Our organisations may have different political views, but we stand shoulder to shoulder to defend our right to express these views be it by peaceful political protest or other peaceful means.

We call on the government to withdraw this Bill in its entirety until such a time as the COVID-19 pandemic is over, and proper scrutiny of its contents and long-term implications can take place.”

Naomi Smith, CEO of Best for Britain. Tom Brufatto, former organiser of the People’s Vote demonstrations and co-director of March for Change. Richard Tice, leader of Reform UK and founder of Leave Means Leave. Anna Bird, CEO of the European Movement UK. Dr Meenal Viz, lead a one-person protest during the first lockdown of the Covid pandemic over PPE.