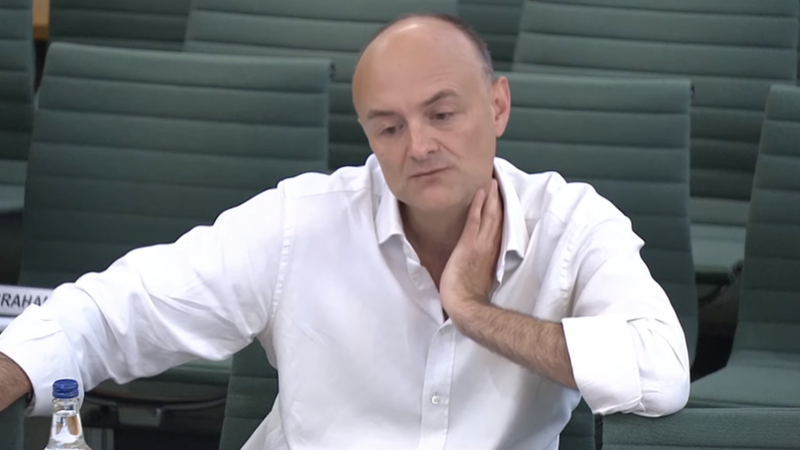 The PM’s former top aide Dominic Cummings on Wednesday gave evidence before a select committee in a bit of political theatre that has eclipsed his Rose Garden performance a year ago. While bearing in mind that Cummings himself has a somewhat economical relationship with the truth, he purports to offer a rare look behind the curtain of the government’s early pandemic response.

Here are some key takeaways from his claims so far:

In a first from any senior official connected with the government’s handling of the pandemic, Cummings said that senior ministers and advisors ‘fell disastrously short of the standards the public had a right to expect in a crisis like this.’

He added: “When the public needed us most the government failed.

“I would like to say to all the families of those who died unnecessarily how sorry I am for the mistakes that were made and for my own mistakes at that.”

This was a rare moment of contrition for a man known for his arrogant and combative style. This mea culpa coming from someone now out of the corridors of power with an axe to grind may offer little comfort to bereaved families. But getting an admission from someone involved in the government’s policy that the UK’s astonishing death rate isn’t a sign that the government acted competently still feels significant.

Cummings alleges that nobody in government took the virus seriously until the end of February, with Johnson even talking about Chris Witty injecting him with the coronavirus live on TV. He even claimed that several people, including Johnson, took a holiday in mid-February 2020.

While these are very damning allegation it certainly seems to line up with the laissez-faire attitude of this government in the early pandemic days. We already know the Prime Minister missed five consecutive COBRA meetings, and memorably bragged about shaking everyone’s hands in a hospital which had covid patients.

In a full-on attack, Cummings said the Health Secretary should have been fired for ‘at least 15, 20 things’ including lying multiple times in cabinet meetings and publicly. He went on to allege that Johnson came ‘close’ to firing Hancock in April last year but didn’t do it. Asked to provide evidence, Cummings pointed to Hancock’s saying everyone who required treatment received it, knowing that the chief medical officers had briefed him that was not the case, and ‘many people were left to die in horrific circumstances’.

In a meeting with himself and the PM, Cummings claimed that Hancock categorically pledged that people would be tested for covid before being discharged into care homes.

He added: “Quite the opposite of putting a shield around them, we sent people with Covid back to the care homes.”

Cummings accused Hancock of ‘criminal, disgraceful behaviour that caused serious harm’. Hard to imagine how Hancock is feeling about those statements, particularly given he was one of those defending Cummings after his Barnard Castle antics.

Cummings said that if the plan had been subject to scrutiny by ‘smart people’ the government would have figured out six weeks earlier there was an alternative plan. He said that Whitehall’s dismissal of criticisms as those from the outside not understanding the plan was ‘a classic historic example of groupthink.’

More damningly, Cummings said that top civil servant Helen MacNamara said the lack of planning meant they were ‘absolutely f****d’ and that the country was heading for a disaster. If true, this appears to be a fair assessment of what followed.

The committee heard that prior to April last year, the advice was that closing borders had ‘no effect’ and could even be seen as ‘racist’. But after the UK moved to plan B, Cummings said the PM didn’t want a proper border policy in place.

Cummings said Johnson called lockdown a ‘terrible mistake’ and added ‘I should have been the Mayor of Jaws, we should never have done lockdown one, the travel industry will all be destroyed if we bring in a border policy.”

This is one of the more believable claims, given Johnson’s well documented if baffling history of seeing the mayor who kept the beaches open as the true hero of the film.

Cummings said it is ‘intolerable’ for any kind of public enquiry into the handling of the pandemic not to start until the following year. Rather ironically considering the source, Cummings questioned why MP’s didn’t ‘take control’ and force the issue in the same way they attempted by forcing Brexit votes.

Cummings said: “Tens of thousands of people died who didn’t need to die.

“There is absolutely no excuse for delaying that, because a lot of the reasons why that happened are still in place now.”

Commenting on the alleged remarks, Cummings said that the PM said those words in his private study on October 31 last year. Johnson has denied saying those words to the House of Commons.

Cummings also claimed that Johnson ignored scientific advice to lock down in September, saying the PM was more focused on the economy. He said that Johnson was ‘very cross’ for being pushed into a first lockdown.

Cummings told the committee that while Carrie Symonds did influence his decision to quit his job at Number Ten, ultimately he saw the PM as ‘fundamentally unfit for the job.’

Earlier he said of the 2019 election between Johnson and Jeremy Corbyn that there were ‘thousands’ of people who  ‘could provide better leadership than either of those two.’

It remains to be seen whether these allegations will have any real-term political consequences for this government.