The findings come as Nicola Sturgeon is once against sworn in as First Minister, after voters elected a pro-independence majority. 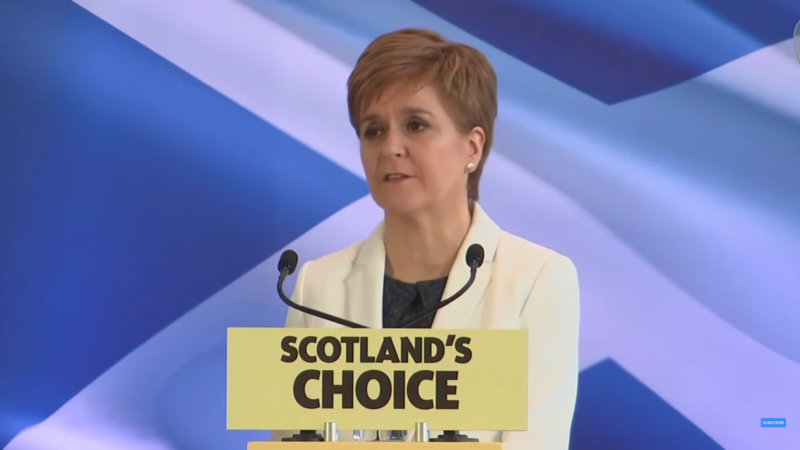 Voters in England back Scots’ rights to a second independence referendum, landmark new polling for Left Foot Forward has revealed.

Scots elected a pro-independence majority in Holyrood earlier this month, with the SNP and Scottish Greens commanding 72 out of the Parliament’s 129 seats.

While recent polls have seen a slight shift against Scottish seccession, as recently as April successive polls were showing a clear lead for supporters of independence – and pressure is only going to grow following the landmark results of May 6th.

Now exclusive Savanta ComRes polling for Left Foot Forward shows that a plurality – 39 percent – of voters across Britain believe Scots have the right to another referendum following the Hoyrood election results, to just 34 percent who believe they do not.

Most striking is the fact that a plurality (38%) of voters in England believe Sturgeon has the right to launch another referendum, to 34 percent who do not.

Even voters in Tory-dominated South East England (40%) back allowing another independence vote, though by a slim margin (38% against).

And a clear plurality – 46 percent –of voters in Scotland back the right to another vote, compared to 32 percent against.

The findings will be seen as a major boost for the SNP, as Nicola Sturgeon is expected to be sworn in as First Minister today. The SNP leader has vowed to press ahead with second referendum plans, putting her on a collision course with the UK government.

While Sturgeon has ruled out an illegal ‘wildcat’ referendum, the views of voters in England could prove significant in determining whether Westminster can continue to deny another indy vote.

Piling pressure on Keir Starmer and Scottish Labour’s Anas Sarwar is the fact that a majority – 51 percent – of Labour voters across Britain back the right to another independence vote, to just 21 percent against.

While Keir Starmer has said the UK must ‘change to survive’, he has argued the SNP’s focus on independence is the ‘wrong debate’ and insisted now is not the time for another independence referendum. Labour has instead mooted proposals for federalism, with former PM Gordon Brown leading the charge through a Constitutional Convention.

New Scottish Labour leader Anas Sarwar has argued Scotland should ‘call time’ on the independence debate for the next five years – a point arguably rebutted by voters at the polls this month. Scottish Labour fell by two seats, after running on a platform for ‘national recovery’.

Sarwar is viewed as being ‘unequivocally’ opposed to another indy vote, unlike Welsh counterpart Mark Drakeford. The Welsh First Minister has not ruled out an independence referendum in Wales, telling Radio 4 last month: “I have always believed that if a party won an election in Wales with a referendum on independence in its manifesto then it would have won the right to hold such a referendum.”

The new polling for Left Foot Forward finds that one in four (27%) Conservative voters back permitting another independence vote, though a majority (52%) are opposed.

Across Britain, 45-54 year olds are most in favour of letting Scotland push ahead with another indy vote, with 45 percent in favour.

Boris Johnson has repeatedly ruled out allowing a second independence referendum to go ahead, arguing the 2014 referendum was ‘once in a generation’. Several newspapers have reported that the UK government is prepared to take the Scottish government to court if it moves ahead with referendum plans, or that UK ministers may attempt to pass legislation explicitly outlawing another indy vote.

Over a quarter of voters (27%) do not have a view on whether Scots have the right to another independence vote, suggesting opinion could change rapidly as the issue moves up the agenda.

Commenting on the findings, SNP Depute Leader Keith Brown said: “This poll shows that people across the UK – including almost 60 per cent of those expressing a view in Scotland – believe that people in Scotland have the democratic right to choose our own future in a post-pandemic referendum.

“The Holyrood election delivered a cast-iron democratic mandate for an independence referendum. And Boris Johnson’s undemocratic attempts to ignore that free and fair election result and deny the people of Scotland the right to choose a better future as an equal, independent country are completely unsustainable and will not hold.

“This poll also piles more pressure on Labour leader Keir Starmer’s muddled position, and puts him at odds with his own party members who overwhelmingly support Scotland’s future being in Scotland’s hands – not Boris Johnson’s.

“Westminster has shown it is incapable of delivering the change that is required for Scotland’s recovery from the Covid-19 crisis. If the UK remains a democracy, then people in Scotland must have the right to decide our own future, so we can choose a better path than Boris Johnson’s shambolic Tory government and continue to build a fairer country.”

Scottish Greens co-leader Patrick Harvie told LFF the poll reveals that the majority of people in Britain ‘support democracy in the face of attempts to curtail it by the UK government’: “This is especially true of Labour voters, who must be extremely frustrated with the obfuscation shown by Keir Starmer and Anas Sarwar on this.”

He added: “It is shocking that Labour would ignore the wishes of its own members and the Scottish Trades Union Congress to deny Scots a say over our future.”

Correction 18th May: This piece initially said pro-independence parties had 70, rather than 72, seats in Holyrood.