In a wide-ranging interview with LFF, Davey discusses his party’s vision, why he believes the Liberal Democrats are ‘greener than the Greens’ and whether he is open to the formation of a progressive alliance to oust the Tories. 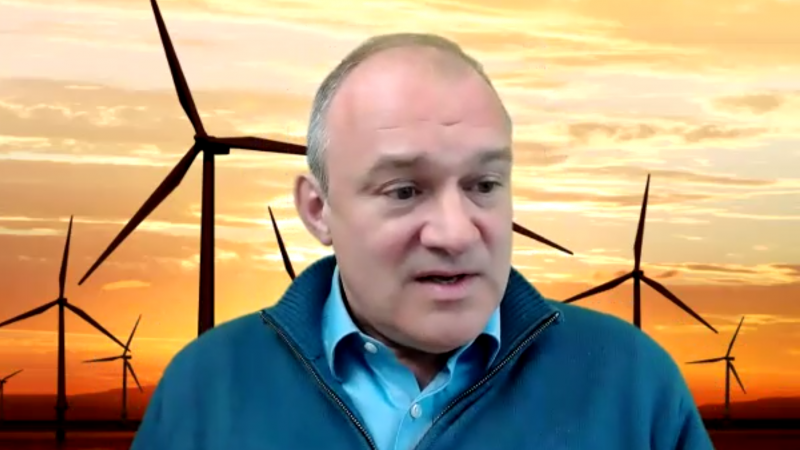 Liberal Democrat leader Ed Davey has warned that voters have not realised the ‘full extent of the government’s crackdown on civil liberties’, describing the Queen’s speech as the ‘most illiberal legislative programmes in British history.’

Davey made the comments in a wide-ranging interview with Left Foot Forward, in which he discussed his party’s vision, why he believes the Liberal Democrats are ‘greener than the Greens’ and whether he was open to the formation of a progressive alliance to oust the Tories.

The Liberal Democrats made modest gains in the local elections held over two weeks ago, where the party gained control of one council and retained control of five, a result that Davey has hailed as ‘real progress.’

Asked if he thought his party had underperformed, Davey told LFF: “I’m not sure we did. We have five times more councillors than the Green Party. we’re vastly stronger than the Greens are both in parliament and councils.”

He said his priority as party leader now was to show just what an authoritarian government Boris Johnson’s Tories are.

“The voter ID approach is appalling and its suppressing voters, undermining democracy, and all the evidence shows its ethnic minorities hit the most. It’s an outrageous position,” he said.

“The crackdown on protests is being repeated, the attack on judicial review, centralisation of planning powers, taking powers from communities [with] a developers’ charter.

“It adds up to a theme in the Queen’s Speech – the opposite of what Liberal Democrats are for. We’re about empowering communities, improving our democracy, pushing power down, civil liberties.

“I couldn’t be angrier about this Queen’s Speech. We’ve had months and months of Tories telling us how liberal they are – they’ve just voted for one of the most illiberal legislative programmes in British history.”

Though Davey stressed that he was happy to support anything in the Queen’s speech that aimed to tackle climate change, an area he was keen to shore up his party’s credentials on and appeal to Green voters.

He said: “I’m very proud of the Liberal Democrats’ record on the environment  and climate change. We’ve got the strongest climate change record of any political party – particularly on things like renewable power. I think the governments’ agenda is pretty weak, and it need far more resources and far more urgency.”

The MP for Kingston and Surbiton went on to add that he thinks his party is ‘greener than the Greens’, claiming the Greens were opposed to the Carbon Capture and Storage (CCS) which he says is needed to get to net zero as quickly as possible. [UPDATE 22nd May – A Green party spokesperson says this is ‘false’, pointing to party policy which backs CCS].

Davey previously served in the coalition government between the Liberal Democrats and Conservatives from 2010-2015, as Secretary of State for Energy and Climate Change and is proud of the work he did.

“I had to fight the Tories every single day of the coalition,” he said.

“I fought Eric Pickles, Owen Patterson, George Osborne. I might have done it around the Cabinet table, but I was fighting, and I was beating the Tories.”

“I had arguments all the time with Eric Pickles – I tried to get the wind industry to judicial review another Cabinet minister!”

Would he ever consider going into coalition with the Conservatives again? Rejecting any possibility of a repeat scenario that resulted in voters abandoning the Liberal Democrats in 2015 which saw the party go from 57 MPs to eight, Davey says: “I want to get Boris Johnson and this Conservative government out of power, period.”

He doesn’t rule out the possibility of forming a progressive alliance with other parties to oust the Tories however and says Labour aren’t competing for any of his parties existing seats.

“So, Labour aren’t competing for any of our existing seats and then you look at places we’re second, 91 second places and 80 of those are with the Tories in first place and then if you look at them in more detail and look at the ones we’re most likely to win, they’re against the Tories.”

A major part of Davey’s attempt to woo Tory voters lies in what he says is the frustration of Tory voters on planning laws, laws which he accuses the current administration of tearing up.

He said: “Liberal Democrats have pioneered and shown that a community led approach to planning can build the homes we need with all the social infrastructure that’s needed, with local people having a say on where those houses go and I could show you loads of examples where that bottom up approach to planning gets people quite excited.”

He condemned the Tories for introducing a developer led system where power is taken away from communities, a move he thinks has alarmed Tory voters.

An upcoming by-election in Chesham and Amersham in June gives Davey much cause for hope, he describes it as a two-horse race and one where only voting Liberal Democrat can beat the Tories.

Would he ask Labour to stand aside in Chesham and Amersham?

“I don’t believe in parties standing aside”, he says.

“Since I’ve been in politics what you find in by-elections is that people stand but it’s where they campaign really hard to win that matters and the Liberal Democrats will be campaigning thoroughly hard because we are the only party that can beat the Conservatives in Chesham and it’s pretty clear from all the polls.”

Correction: This article was amended to include Ed Davey’s reference to renewable power rather than nuclear power.

Listen to the full interview on Soundcloud here or below: