'It is kneejerk, populist and fascistic law-making to protect the lies of benevolent imperialism, and it is a dangerous attack on all of our civil liberties.' 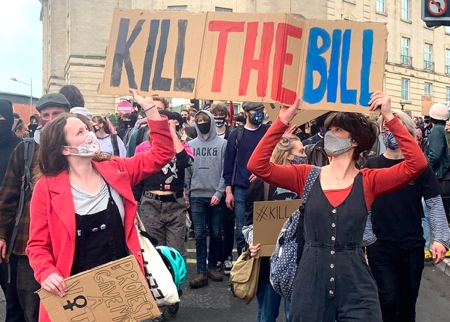 Anne McLaughlin is a Scottish National Party politician serving as the Member of Parliament for Glasgow North East.

The Scottish Conservative and Unionist leader, Douglas Ross MP/MSP, recently set out the one thing he would do if he was Prime Minister for the day with no repercussions.

It was to bring in ‘tougher enforcement against Gypsy travellers’. With the Police, Crime, Sentencing and Courts Bill 2021 his dreams have come true.

This government has brought forward legislation to attack the way of life of the Gypsy traveller community – already among the most persecuted peoples in the UK.

Persecution to the point of eradication appears to be the aim of the Conservative Party, aided and abetted by hate pedallers, and columnists like Matthew Parris.

The provisions of the bill that allow the seizure of their vehicles are cruel in the extreme. They would be akin to my home being confiscated for a trespassing violation. Violations are the inevitable end result of the closure of sites up and down the country.

There’s more to this Bill of Horrors, of course.

Next up, we have the provision for 10 year jail sentences for the heinous crime of toppling a statue of a chattel slave owner or a war criminal. Contrast this with the sentences for actual modern day slavery offences, which are on average much less.

This Tory government is bringing their culture war into the legislature and that is something that should worry every single person in the UK. It is kneejerk, populist and fascistic law-making to protect the lies of benevolent imperialism, and it is a dangerous attack on all of our civil liberties.

Civil liberties such as the right to protest. This bill directly contradicts the rights of citizens to protest where, when and how they choose. If it goes through, there will be very few rights to protest in England and Wales at all.

It’s unacceptable in a democracy, especially one that likes to claim to be the bastion of democracy and has a history of telling the rest of the world how to behave.

Let me note some things the people of Scotland have protested about in England:

Rosie Dickson from WASPI told me the policing bill is ‘a step too far’, as they now face having their human right to protest without fear of arrest, removed.

None of the measures in this bill do anything to improve police relations with the public, reduce crime or address the backlog in the courts or overcrowding in our prisons. The desire to appear ‘tough on crime’ will be counterproductive.

If the UK government want to see an example of successful community justice they need only look to Scotland where we have the lowest reconviction rates since records began.

“Community justice allows people who commit a crime to pay back the community they harmed, whilst addressing any underlying causes of crime such as addiction, homelessness and mental health issues,” the Chief Executive of Community Justice Scotland, Karyn McCluskey, said.

We in the SNP want to leave the UK, we want to forge a new future free of the increasingly right wing, reactionary and downright cruel policies of a Westminster government and a Conservative Party that has been roundly rejected at every election in Scotland in over half a century.

But while we are here, we will fight for the rights of every single person residing in the UK, even if your own MPs will not.

No need for thanks, you are very welcome.