Seven in ten members of the public want the government to make 'fire and rehire' illegal. 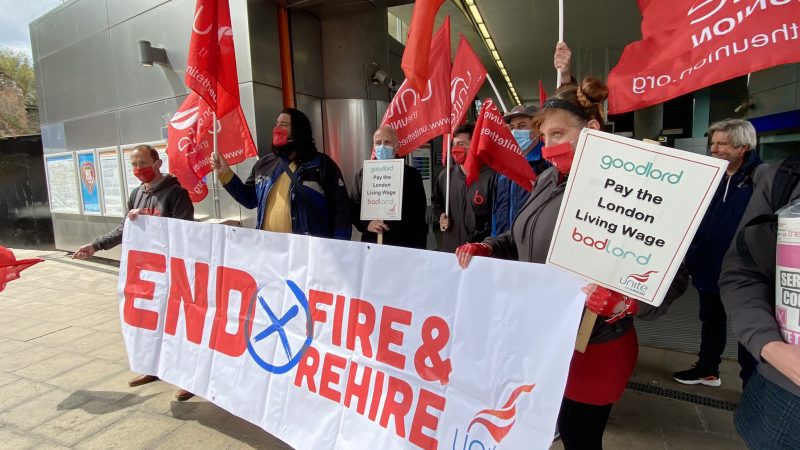 Seventy per cent of the public would like to see the controversial practice of ‘hire and fire’ a new poll from Survation and Unite the Union finds.

The practice allows bullying bosses to rip up established contracts and replace then with inferior ones.

This works either by forcing workers to accept new contracts by threatening redundancy if they don’t, or by firing workers and rehiring on reduced terms and conditions.

High profile examples include the current dispute at British Gas where GMB members have taken over 40 days of strikes. Nearly a thousand engineers face losing their jobs after rejecting new contracts asking them to work three hours more a week and lose additional weekend and public holiday pay.

Thirty field engineers at Brush Electrical have been offered noew contracts that include reductions to overtime rates, allowances, holidays and other terms and conditions that would result in a pay cut of between £10,000 and £15,000 a year. They have been threatened with the sack if they don’t accept.

“It’s quite clear that the public is firmly on the side of working people when it comes to the horrific practice of fire and rehire. There is no grey area here – they can see that this is an objectionable practice which should be banned.

“The government has to get on the same page as the voters on this, and fast.

“It can do so with the Queen’s speech next month, bringing forward legislation to end fire and rehire to give the working people of this country the same protection as workers elsewhere, such as those in Ireland and Spain.

“With already one in ten workers and their families going through the process of being told to take a pay cut or take a hike, that’s millions of people in this country going through needless turmoil caused by opportunistic bosses.

“The government itself has denounced fire and rehire as ‘bully boy tactics’ so we expect them to act without delay to use their power to eliminate it.

“The public’s revulsion is clear. The government must now end fire and rehire.”

“Fire and rehire has allowed my company to tell me to travel unvaccinated across the globe throughout the pandemic, quarantine in extreme conditions overseas and at the end tell me to take a substantial pay cut or walk away with nothing after over 15 years of service.”

If the government is to take it’s promise to ‘level up’ seriously, it should end this vicious practice.