The NHS is the model of how the state can democratise action on climate change. 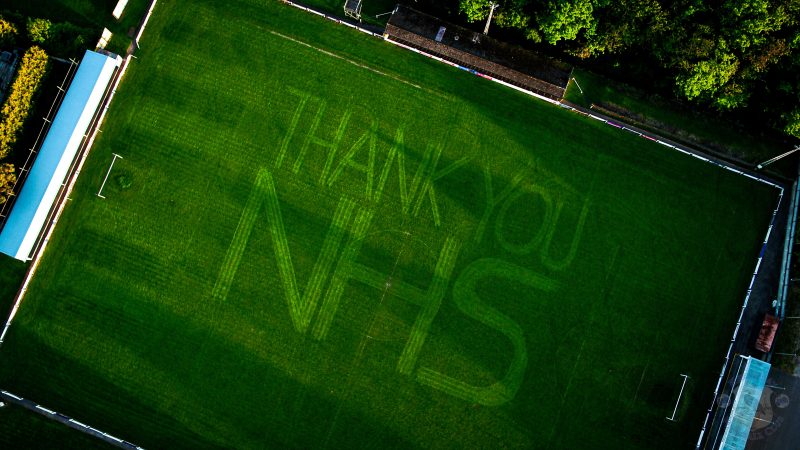 Mathew Lawrence and Laurie Laybourn-Langton are the authors of Planet on Fire: A Manifesto for the Age of Environmental Breakdown.

In looking for a path beyond the neoliberal state, we find one national institution that has always embodied the alternative to neoliberalism – the National Health Service (NHS).

The NHS is Britain’s publicly owned and provided system of healthcare, free at the point of use and funded through general taxation. Debates about the NHS (rightly) focus on funding and its stealthy privatisation. But this has obscured important dimensions of the NHS’s work: its impact on society goes beyond treating people, and, further, demonstrates how a different model of government could accelerate action against environmental breakdown while redressing its harms.

As of 2018, the NHS spent £27 billion on goods and services in England each year, was one of the largest employers in the world, with 1.5 million staff (around 5 per cent of total people in paid work), and occupied over 8,000 sites across 6,500 hectares in England alone. The sheer size of its operations means that the NHS has an influence on the world beyond making sick people better.

This can be good or bad. For example, the NHS has firm views on what constitutes value for money when it comes to drug prices, an assessment used by both the centralised NHS drug procurement system and many medical services around the world, which pushes down the global price of drugs.

On the other hand, the NHS is responsible for around 3.5 per cent of all road traffic in England at any one time, resulting in greenhouse gas emissions and air pollution that cause ill health, shorten lives and impose an estimated economic cost of £345 million. Either way, the NHS can use its enormous power to improve social, economic and environmental outcomes in Britain above and beyond the clinical sphere.

Crucially, this can be done in a way that encourages the flourishing of resourceful communities, moving beyond the centralisation of the neoliberal era and the post-war consensus before it.

This is, in fact, already happening. Several hospitals and health centres are adopting the community-wealth-building approach to behave as an ‘anchor institution’, leveraging their important role in local areas as purchasers of goods and services, landowners and employers.

This has led some to install renewable energy on hospital sites funded by community investment. This pays out a return to local people, and, in some cases, profits go into a fund to support those in fuel poverty. In turn, wealth is created and retained locally, greenhouse gas emissions are reduced, energy costs fall, and health improves as fuel poverty is reduced.

Meanwhile, other NHS bodies have implemented schemes to support staff and patients in using shared transport and in cycling and walking, gaining fitness from less air pollution and more physical activity while lowering the transport bill.

Other examples include procuring some of the 300 million meals the NHS serves each year from sustainable, local food producers, or recycling waste heat to local people, reducing bills and saving energy.

The list of projects goes on and, in each case, shows that more sustainable healthcare equals more effcient and effective healthcare.

Overall, local action as well as system-wide changes, including changing how central NHS bodies behave, has helped the NHS reduce its environmental impact to a remarkable degree. Between 2007 and 2017, NHS emissions fell by nearly a fifth, an amount the same as the yearly emissions of Cyprus. It managed to do this while growing in size by over a quarter, according to some indicators of the NHS’s clinical activity. Between 2010 and 2017, it reduced its water use by over a fifth, the equivalent of 243,000 Olympic swimming pools, and around 85 per cent of waste no longer goes to landfill.

The NHS has a long way to go before functioning within truly safe environmental limits. But, in many respects, it leads the world in understanding its environmental impact and acting to reduce it. In the process, it shows us the indispensability of the state in responding to environmental breakdown and doing so in a fair, better-prepared way.

A singular healthcare system allows for more rapid change than do fragmented private systems as in the US, while also ensuring that healthcare remains a right and not a privilege, provided on the basis of need, not ability to pay.

In this way, the national structures of the NHS could provide equitable protection from the enormous threats to health posed by environmental breakdown, in much the same way as they did in response to the coronavirus pandemic, marshalling extraordinary resources to build entire hospitals in a matter of days. It is not just the Chinese state that can do so. And these structures can also enable the NHS to act as a powerful nationwide driver of sustainability while, along the way, reaping the enormous benefits to health from adopting more sustainable diets and ways of travelling, as part of lower- impact lifestyles in general.

Such a vision for the NHS provides us with an alternative model for the state as a whole. It is a model that underpins the conception of a Green New Deal – the plan for enormous state-directed investment to combat the climate and other environmental crises while rectifying structural injustices and kick-starting stagnant economies.

The necessity of, and opportunity for, a green and equitable recovery in the wake of the coronavirus and the breaking of the myth that governments cannot borrow and finance to invest on an extraordinary scale to achieve pressing goals must kill off any excuses for not implementing a Green New Deal.

But even then we are very far from the adoption of a post-neoliberal model of the state. As with the NHS, the sale of public assets and the outsourcing of its functions have steadily eroded the power of the state. So have major budget cuts and ‘reforms’ that have led to public services being run like businesses, creating a wasteful bureaucracy that enforces the neoliberal mantra that competition and not cooperation is the route to success.

In 1948, Britain democratised good health. With the NHS, generations of struggle had gifted people the freedom from fear. Generations later, greater democratic oversight over the economy and society is a prerequisite for winning freedom from the fear and fire of environmental breakdown.

This is an extract from Planet on Fire: A Manifesto for the Age of Environmental Breakdown, out 20th April with Verso Books.