The DUP strategy always involves the threat of violence, followed by denunciations of the violent once the inevitable violence happens. 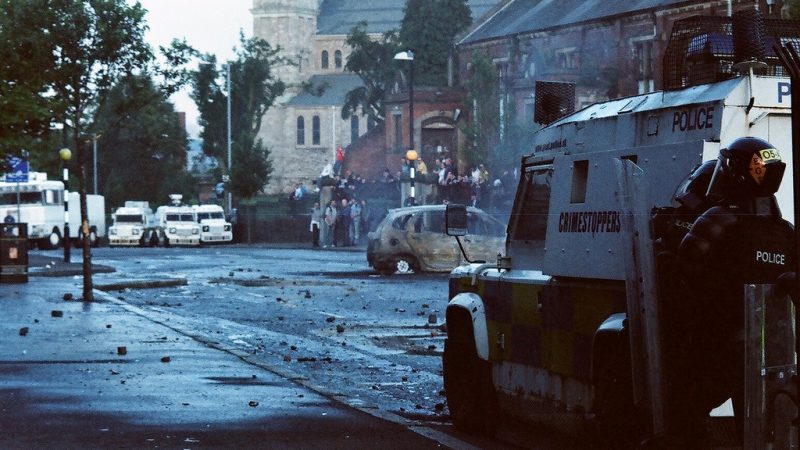 Peter McColl is a Scottish Green Party activist and the former rector of the University of Edinburgh.

The history of Northern Ireland since the 1998 Good Friday agreement can be told through the history of the two leading parties, and how they got into that position. Those parties are the Democratic Unionist Party (DUP) and the republican party, Sinn Fein.

The history shows how the DUP were masters of political tactics, but by strategic missteps have landed us back in the violence that has mired Ireland for much of the last century. What we see again is the DUP prioritising tactics over strategy.

The origins of the DUP

The DUP draw their support almost exclusively from the Protestant community, Sinn Fein from the Catholic community. Northern Ireland was created through the partition of Ireland in the 1920s, it consisted of the 6 majority Protestant counties in the north east of the island. For almost all of its history the majority party of Unionism was the Ulster Unionist Party. The DUP is a different beast – its origins are in the puritanical Christianity of its founder, Ian Paisley and his followers.

The Ulster Unionists ran what Unionist Prime Minister Terence O’Neill critically called “a Protestant Government for a Protestant people”, implying the Irish Republic was a Catholic state. Catholics were shut out of politics through the gerrymandering of elections and from the workplace by widespread discrimination. Catholics were denied housing and educational opportunities.

The animating character in resisting concessions on civil rights for Catholics was Ian Paisley. He undermined Terence O’Neill as Prime Minister with his aggressive oratory, fearmongering about the threat of a united Ireland, and whipping up working class Protestants to oppose civil rights concessions.

He won election to the Northern Ireland Parliament, and then to the Westminster Parliament. But his brand of unionism remained a fringe concern. As late as 1997 the DUP took 13% of the vote in the General Election. They won only 2 Westminster seats that year, to the Ulster Unionist Party’s 33% of the vote and 10 seats (out of 18).

It was at this point that the DUP’s skill at political tactics combined with political developments to change the face of politics in Northern Ireland. The peace process accelerated after the election of the Blair government, and culminated in the signing of the Good Friday Agreement in 1998.

The Good Friday Agreement re-established an Assembly at Stormont. It guaranteed power sharing, with the majority of unionist and nationalist members of the assembly needing to support any Executive. It allowed for the release of paramilitary prisoners from groups that signed up to the Agreement. It also set out the conditions for a reunification referendum.

The concessions came on both sides. Unionists recognised that there could be a united Ireland with the consent of the population. Nationalists recognised the validity of the Northern Irish state. There would be a unionist-led government for the foreseeable future, but nationalists would always have a seat at the table. There would be a First Minister and Deputy First Minister one from each side, with equal powers.

Yet the DUP rejected this. The ‘Democratic’ in their name signals their refusal of power-sharing. A foundational belief was that the majority should rule and that majority should be Protestant. And this is part of the current predicament Northern Ireland finds itself in.

The DUP’s rise to power

The DUP quickly overtook the Ulster Unionists to become the majority party of Unionism and the single largest party in Northern Ireland. Ian Paisley became First Minister with Sinn Fein’s Martin McGuinness as Deputy First Minister. Paisley believed McGuinness to have been a terrorist. Nevertheless, they concluded some tweaks to the Good Friday Agreement at St Andrews and formed a power-sharing Executive.

Some in the DUP were unhappy, and plotted to remove Paisley as FIrst Minister, which they succeeded in doing. He served less than a year as First Minister and was replaced by Peter Robinson, his long time deputy and leading plotter. The plot was superficially about corruption, but substantively about Paisley’s final sell-out. Robinson took a much harder attitude to Martin McGuinness.

In the period of DUP-Sinn Fein joint rule not much has changed. It’s hard to point to big public policy changes, or any direction for Northern Ireland. There is no political project for Unionists, other than continuing to oppose Irish reunification. When unionists say they have got nothing out of the peace settlement, this is what they mean. They think that there should never have been a conflict, because the civil rights cause was either bogus, or solved by the early 1970s, and that they have given substantial concessions for nothing in return.

It was incumbent on the DUP to produce a vision. Yet they have never come close to telling people what they want to do, other than make sure there isn’t a Sinn Fein First Minister. That is thin gruel through the years of austerity since 2010, and provides fertile ground for disaffection.

In 2011 the Northern Ireland census showed that, for the first time, Protestants were not in the majority. They were still the single largest group, but no longer in the majority. For decades unionists had worried about higher population growth amongst Catholics. In the previous year the then DUP leader Peter Robinson had lost the East Belfast Westminster seat he had held since 1979. He lost it to the cross community Alliance Party. In 2012 Sinn Fein put a motion before Belfast City Council to remove the Union Jack from the building on all but the 18 days the flag flies from similar buildings in the rest of the UK. Alliance supported this motion. What followed was weeks of rioting. Alliance representatives had their offices attacked, and even fire-bombed.

The outcome was that Alliance lost the East Belfast seat back to the DUP in 2015. The lesson had been learned: to win elections you ride the sectarian tiger.

The DUP backed Brexit for a curious mix of reasons. Going back to their evangelical Christian roots, the DUP had opposed the European project for decades because of their reading of the Book of Revelation in the Bible. More prosaically, they opposed the EU because it brought Northern Ireland into a political arrangement with the Republic, where there was no border. As the Republic moved away from being a state closely aligned with the Catholic church, and became more cosmopolitan, so the DUP worried more about both the potential for liberalisation in Ulster, and the growing size of the Catholic community.

While their constant tactical maneuvering had put them in the position to be the majority party of Unionism, their lack of strategic vision meant they blundered terribly over Brexit. Thinking that a Catholic majority would precipitate a united Ireland they campaigned hard for Brexit. When, in 2017, they ended up with the balance of power in Westminster they used it to ruthlessly pursue the hardest Brexit possible. People often ask why. The reason is simple. They wanted a hard Brexit to bake Northern Ireland into the UK, and create as much difference with the rest of Ireland.

The DUP Brexit position was a total misreading of Catholic opinion, which was mostly comfortable in a Northern Ireland that allowed them to express their Irish identity, while maintaining the NHS, and other benefits of the UK. A united Ireland may have come, but it was not a widely held priority for most Catholics, so it wasn’t going to come any time soon. But the agreements on which the Northern Irish peace were built all assumed the UK and Ireland would remain in the EU. Ireland refused to be taken out of the single market and customs union by the UK, and the UK governments of Theresa May and Boris Johnson both sought hard Brexits that put those arrangements on the table.

Then Boris Johnson, who had spoken at the DUP conference in 2018, sold the DUP out. His Brexit deal, cooked up with the Irish Taoiseach Leo Varadkar, overcame the problem of the Irish border by effectively leaving Northern Ireland in the Customs Union and Single Market, and putting a border in the Irish Sea.

The DUP had messed up massively. And they went back to the flag strategy. When former IRA leader Bobby Storey died in summer 2020 there was a large republican funeral. Leading Sinn Fein figures, including the Deputy First Minister, Michelle O’Neill, attended despite the Covid advice being to limit attendance at funerals. Ever since the DUP have stoked tension over the Police failure to arrest and charge any of the mourners for breaching Covid regulations.

This approach has characterised the DUP’s time in office. Continually claiming that nationalists have gained and unionists have lost. Creating a culture of grievance. Substituting actual material gains for unionists for a general feeling that there is nothing to be gained from politics. And failing at any point to see, much less acknowledge, the concessions made by nationalists.

Arlene Foster, the DUP leader called for the Chief Constable of the Police Service of Northern Ireland to resign. She met with the leaders of loyalist paramilitaries before she met with the police. The DUP strategy always involves the threat of violence, followed by denunciations of the violent once the inevitable violence happens. So it is again.

There is an Assembly election next year. The DUP are under enormous pressure from more radical unionist parties, like Traditional Unionist Voice, led by former DUP MEP, Jim Allister. They are rightly angry that the DUP voted down Brexit proposals in Westminster that would have kept Northern Ireland in the UK, and have ended up with a deal that looks like a substantial step towards a united Ireland. They are stoking tension to protect their electoral position. But it is a trick you can only pull so many times. The risk is that this time the people will see through them.