Almost no NHS prescriptions for medical cannabis are being issued, despite the UK being the world's biggest producer. 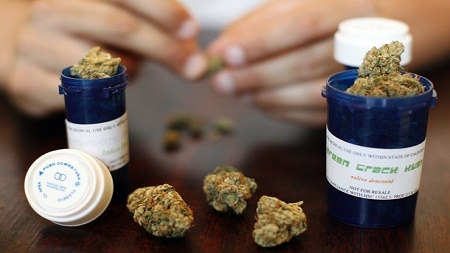 UPDATE: In response to this piece, a spokesperson from the Department of Health and Social Care told LFF: “We sympathise with every patient and every family courageously confronting life with hard to treat conditions.

“The government changed the law in November 2018 to allow specialist doctors to prescribe cannabis-based products for medicinal use where clinically appropriate and in the best interests of patients.

“We will consider what further action the government could take with regard to broader access to unlicensed cannabis-based products.”

A new report from the UN’s International Narcotics Control Board has revealed the UK is the world’s largest producer of legal cannabis for medical and scientific uses. Yet proper access to medical cannabis is still out of reach to many UK patients, campaigners say.

The report – that includes data from governments around the world – estimates that the UK produced 320 tonnes of legal cannabis in 2019 – more than triple the 2016 total of 95 tonnes, and accounting for 75% of the global total (468.3 tonnes). The UK therefore retains the ‘number one’ spot.

This news of the UK’s number one position for medical cannabis production may come as a surprise to many, given that the UK government is behind many other nations on access to medical cannabis, despite a change in the law in November 2018.

Last July campaigners urged the UK government to improve access to medical cannabis prescriptions, as restrictive guidance from regulators meant that no new NHS prescriptions had been written for the last two years. Thousands have been forced to take out expensive private prescriptions instead, creating a two-tier system of access.

A study by former government adviser Prof David Nutt and other researchers last year found that although cannabis-based products for medicinal use are now legal in the UK, it remains “challenging” for patients to gain access: “Only very few National Health Service prescriptions have been written to date…the UK lags behind so many other countries which also have legalised medical cannabis.”

“From consulting with parents and patients, prescribers, pharmacists and decision-makers it seems that there are a series of distinct barriers to prescribing that need to be overcome in order to improve patient access to medical cannabis in the UK,” Prof Nutt and other authors said.

There are only two UK licensed cannabis-based medicines, Sativex – (a whole plant cannabis extract in spray form) – used to treat Multiple Sclerosis, and Epidiolex – (a purified oral CBD solution) – used to treat two rare and severe epilepsies. Both are produced by GW Pharmaceuticals. They are only available on prescription as a last resort.

Philip May, husband of former PM Theresa, is an employee of Capital Group, which owns a significant share in GW*, one of the biggest cultivators of cannabis in the world. [No wrongdoing is alleged].

In 2019, a research study survey in England and Wales found that 1.4 million people self-reported they were using ‘street’ cannabis to treat chronic health conditions.

Jane Slater, Transform’s Deputy CEO said: “If the data from the UN’s drug control board is accurate, then the UK government has serious questions to answer from 1.4 million people relying on the criminal market to self-medicate with cannabis.

“Over 50 years of criminalising people for using cannabis for medical and recreational purposes has paralysed vital research into the potential benefits of cannabis-based medicines, and led to stigmatisation of people who rely on it.

“The government owes it to the 1.4 million forced to rely on the criminal market, to provide a safe and regulated supply of cannabis for their medical needs. It is simply cruel and misguided that these people are demonised and criminalised for seeking help. Countries with proper access to medical and recreational cannabis do not have this problem, with  standardised cannabis products available through doctors, pharmacists and licensed retailers to all who need them.”

Clarification 15th April: An earlier version of this piece suggested Philip May ‘runs’ Capital Group. He is instead a senior executive. We’re happy to update the record.

The UN agency’s data for the UK is based on estimates submitted by the UK government, and the INCB is currently waiting for confirmation from the Home Office of the true figure.