The papers are preoccupied with the funeral arrangements for Prince Phillip. But Tory cronyism stories will run and run. 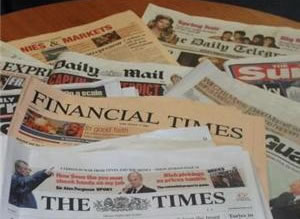 New revelations about Matt Hancock’s ties to a firm that was awarded NHS contracts were revealed last night (Thursday).

The Health Secretary was revealed to have at least a 15% stake in his sister’s company Topwood Limited. Topwood was awarded NHS England contracts in 2019 – Mr Hancock was Health and Social Care Secretary at the time but failed to declare an interest. They were later added to the NHS Shared Businesses framework for “confidential waste destruction and disposal” while he was the Secretary of State. Again, no interest was declared.

There is no suggestion that Mr Hancock was involved in the awarding of contracts.

But this is yet another example of this government being highly casual with the full truth when it comes to their close ties with the private sector.

Mr Hancock must then be breathing a sigh of relief that none of the major papers have decided to cover the story on their front pages. Instead we have a range of speculation and tittle tattle about relationships between members of the royal family or more sombre stories about how the Queen will say goodbye to her late husband.

However, this pause could be short lived.

The royal funeral will give the government a weekend of relief from Greensill stories – and ever-widening allegations of cronyism at the heart of government. But equally, this will push the stories into a second week of coverage as the UK comes out of the official mourning period.

With six different bodies now looking into the government’s relationships with the private sector, It would be a government very confident that it had revealed everything that would go into next week confident it won’t get further knocks.

This story will make it back to the front pages. It may even run and run.

Emma Burnell is a Freelance reporter for Left Foot forward and a journalist, political consultant and playwright