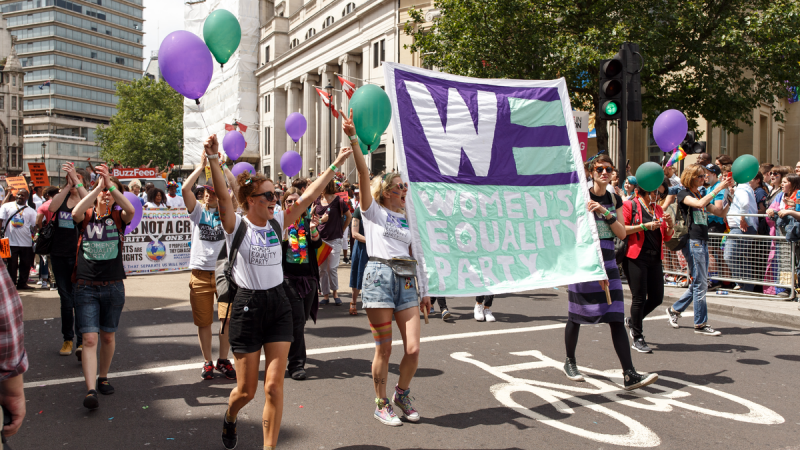 Mandu Reid is leader of the Women’s Equality Party.

Last week I launched my campaign for London Mayor. As I spoke to journalists on the river bank, I noticed out of the corner of my eye as Sadiq Khan’s mobile billboard looped past projecting in neon “jobs, jobs, jobs.” Laurence Fox’s “freedom” bus was also doing the rounds.

I laughed because the London elections nearly always descends into a vehicular competition between well-funded men. But I was also reminded of exactly why I am doing this.

Failure at the top

Sarah Everard’s murder was a painful reminder that women in London are not free from the fear or reality of male violence. Unless and until it becomes a political priority, we never will be. During this Mayor’s first term, rape and domestic abuse cases have soared, along with sexual assaults on public transport. Yet charging rates for rape have fallen to a seventh of what they were in 2016, when he took office.

We need a radical shake up. That starts with recognising that policing is not and cannot be the whole solution – especially when women and women of colour have lots of reasons to distrust the police.

I want a deputy Mayor for ending violence against women, who will guarantee that no woman will be turned away from safe refuge (currently 2,000 women and their children are turned away from refuges every year in London).

Instead of the planned £15 council tax hike to fund more bobbies on the beat – a regressive tax that harms women – what if we invested that in a holistic strategy to actually prevent and end male violence, rather than just managing the symptoms of it?

As for jobs, sixty percent of Covid job losses in London are expected to fall on women, sending 60 years of progress into reverse gear. This has happened because as part of the ‘national effort’ to fight Covid, women were expected to take on unlimited caring responsibilities without support. Many women, especially single mothers and those caring for older and disabled relatives, have already been made redundant or been forced to cut their hours or quit their jobs as a result.

More than half of London’s childcare providers are expected to close over the next twelve months, which will only mean further job losses both from the sector itself and the mothers who rely on it. Contrary to Sadiq Khan’s promise of a 1945-style economic recovery, the last thing women want is to spend any more time stuck in the 1940s.

The other major driver of women’s unemployment is the way the pandemic has decimated sectors dominated by young and low-paid women, such as retail, hospitality and beauty. That sets it apart from previous economic crises, and means that the usual tactic of popping on a hard-hat to announce some fancy building project won’t make an ounce of difference. Unless we want to see women’s rights rolled back, we need something that meets the moment.

That is why I am calling for a care-led recovery. Because when everything else was shut down and stripped away during Covid, what had to remain open? It was our hospitals, schools, care homes and nurseries. Care is the beating heart of our city and it is exactly the kind of green jobs that we need to futureproof our economy.

Unless we act now, the exorbitant costs of living will force more key workers to leave our city. That means tackling the scourge of low pay head on, investing in skills and bringing back a social rent policy to put housing in reach of the poorest workers. After all, affordable housing that is set at 80% of market rates is not affordable for women living with a gender pay gap.

I am also calling for a landmark investment to extend free childcare to parents who have lost their jobs. This will give them the support they need to retrain, as well as stopping families being driven into long-term poverty and keeping our nurseries open. And I am campaigning for apprenticeships for young people in jobs that can survive the endless cycle of economic shocks, and capital investment in women and minority-owned businesses.

As the interviews came to an end, one of the journalists asked ‘Aren’t you a bit of an outside bet for Mayor?’ They weren’t wrong, but I’ve never been interested in power for power’s sake.

If the Women’s Equality Party can influence the next Mayor to put equality front and centre and take a seat on the Assembly to hold them to account on that, then it would be just as big a win for women.