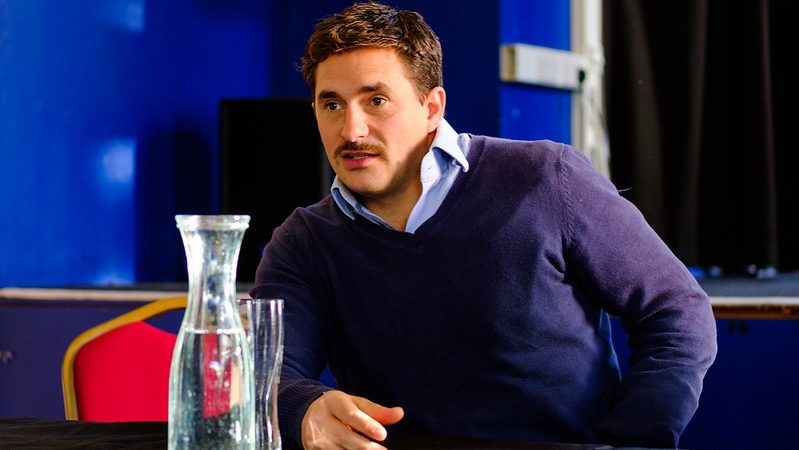 The best thing you can say for Johnny Mercer is that he is a man of principle. Unfortunately, his principle is that the armed forces should be above the law.

Last night, Mercer resigned (or was sacked) in a blaze of anger from his post as Minister for Defence People and Veterans. Ever since Boris Johnson gave him this odd title in 2019, it’s been clear that an angry resignation was a likely outcome.

Ending investigations into veterans is not merely a major interest for Mercer. It appears to be his entire reason for becoming an MP. In reality, members and veterans of the UK armed forces are almost never prosecuted for war-related crimes. But Mercer backed Boris Johnson to become Prime Minister in 2019, as Johnson went along with the dangerous fantasy that there is a “witch-hunt” against British veterans.

Mercer is a poster boy for the hardcore militarist lobby who promote these fantasies. Some of them will never be satisfied, as long as there is any chance at all of a veteran being prosecuted.

But no government could legislate to guarantee absolutely no prosecutions. Therefore, from the time Mercer was appointed, it’s been clear that one of two things would happen. Either Mercer would accept some degree of reality, and be seen as a traitor by the hardcore “protect our veterans” lobby. Or he would lose patience with the government’s failure to go as far as he wanted and resign in bitterness and fury. This has now come to pass.

The trigger for his resignation appears to be the government’s decision to amend their Overseas Operations Bill, which introduces a “presumption against prosecution” for British military personnel accused of war-related crimes overseas after five years. In response to widespread resistance, ministers have now accepted that this should not apply in cases of torture and genocide.

Mercer’s resignation letter was written in anger. In places, it is barely coherent. It has weird irregular capitalisations and at one point he writes “walk” when I think he means “work”. More importantly, the letter is dangerously misleading.

Of the 32 “legacy cases” ruled on by the Public Prosecution Service in Northern Ireland between 2012 and 2019, only five involved British army personnel.

Mercer, who wants to “protect” troops who fought to keep Northern Ireland in the UK, simultaneously seems to treat Northern Ireland as a foreign country. This is a great example of the militarist tendency to champion armed forces with little regard to why they are fighting.

There is one statement in Mercer’s letter that particularly angered me, and which reveals a great deal about a militarist mindset.

Mercer writes, “Veterans are being sectioned, drinking themselves to death and dying well before their time”. He is right. But he attributes this to criminal investigations. This is an outrageous insult to veterans struggling with poverty, addictions or mental ill-health.

The vast majority of the 13,000 homeless veterans in the UK are not being investigated for alleged war crimes. Mercer seems to have no interest in the real causes of such problems: the trauma of war, the vicious reality of military training or the government’s massive underfunding of mental health services.

Similarly, Mercer’s supposed passion for ending unjust investigations does not extend to civilians. He shows little interest in wider questions of criminal justice, such as racist policing or the treatment of rape victims.

Mercer is neither a champion of the needs of veterans nor an opponent of unjust prosecutions. He is a gung-ho militarist obsessed with putting the armed forces above the law.

Mercer will now attack the government from the backbenches for not being militaristic enough. This must not lead us to forget just how militaristic it is. Johnson’s militarist policies include a 44% increase in the cap on UK nuclear warheads and the biggest percentage increase in British military spending since the Korean War.

In this context, it is both sad and alarming to see Labour’s Shadow Defence Secretary John Healey tweet his agreement with Mercer. Keir Starmer has already welcomed the big rise in military spending and only vaguely questioned the nuclear increase.

It is vital that Labour do not give in and abstain on – or even vote for – the amended Overseas Operations Bill. It is time for Labour’s front bench, and all MPs, to find the guts to stand up to the gung-ho militarist lobby represented by the likes of Johnny Mercer.