There's a record gap in outcomes between the poorest and wealthiest students, and sky-high dissatisfaction from teaching staff 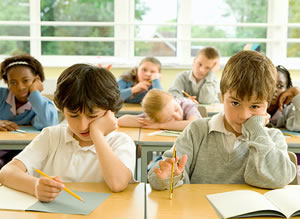 Facing a record gap in outcomes between the poorest and wealthiest students and sky-high dissatisfaction from teaching staff, Covid has had a devastating impact on education.

In response to this unprecedented crisis however, Education Secretary Gavin Williamson has been covering front pages with the baffling promise to ban mobile phones in schools.

Instead, Left Foot Forward has been speaking to unions, education charities and teachers themselves to build a six point list of what actually needs to be done to save our education system in the aftermath of Covid. Hopefully, it could give Gavin Williamson some pointers.

“Our biggest concern is the gap between poorer students and everyone else, especially those on free school meals,” says James Turner, CEO of the educational charity the Sutton Trust. “There was already this big gap before the pandemic… and all the evidence suggests that gap has widened.”

Unless there’s a “a big injection of money” from the government (around £750m by Turner’s estimates) the future costs of this gap on both the children themselves as well as the wider economy could be dire.

Turner also tells LFF that technology is a huge factor – he says just roughly 5% of state school teachers said their kids had enough access to technology, and that especially during remote learning, that impact is disproportionately more likely to badly affect poorer students.

Repeated lockdowns and pandemic burnout have had a dire effect on the mental health of young people, with some studies seeing a 50% rise in the prevalence of diagnosed mental health problems.

“The feedback that we’re hearing shows that young people have suffered in this period like everyone else,” says the Sutton Trust CEO. “There’s a sense of how to you make sure they’re supported on that wellbeing and mental health side as well.”

In the aftermath of Covid, fears have been sparked about a mass exodus of unhappy teachers from the industry. Some half of school leaders have said the stress and worries from the pandemic have made them less likely to remain in schooling.

“So there are lots of reasons why people are talking about leaving the stresses of workloads, as the pandemic is a real factor in that… and the impacts of it on their mental health,” says National Education Union Assistant GeneralSecretary Nansi Ellis. She tells me better pay, conditions and pastoral support for the long-term are utterly vital if we want to stop teachers from leaving education altogether.

Another long-term idea would be reforming Ofsted – “the big elephant in the room” as Ellis puts it – so that teachers don’t have to spend as much time documenting their teaching for inspectors than actually teaching.

Properly funding schools in the long-term

Craig Tallon, the headteacher at Woodcroft Primary School in Burnt Oak, told LFF that for years before the pandemic he had been forced by unstable funding to make harsh cuts to the school’s services and staffing.

He tells me government school funding follows a per pupil formula, which often fails to both support schools in poorer areas like his that have to provide a huge amount of wider services and means areas where families are forced to move frequently face slashed budgets and are unable to plan in the long term.

He explained that the government’s proposed Covid tutoring or catch up programmes were “a drop in the ocean and will have limited impact” compared to what’s needed. “If you’re going to get good people and get them trained and actually make a difference, then it needs to be long-term.”

More ring-fenced funding from government to spend on catch programmes and more support staff could be vital in making sure the children most in-need of support don’t fall through the gaps.

While the interviewees weren’t this blunt, none felt the Education Secretary is currently delivering the kind of support our schools and teachers are in desperate need of.

The CEO of the Sutton Trust said the mobile phones ban was overruling a decision that “headteachers and teachers are best taking on a local level”.

The NEU’s Ellis told LFF his mobile phones plan showed a complete “lack of respect for children and young people” and a “lack of understanding of what happens in schools already”. She suggested that it was emblematic of a government that attempts to “police children, rather than support them” while ignoring what the system really needs.

Even headteacher Craig Tallon accused the government of favouring “catchy and populist in-the-moment initiatives, which overlook the long-term needs” of schools.

So maybe the best thing Gavin Williamson could do for schools is just resign.