"When did we stop caring about honesty and integrity? That is what today's Opposition Day motion on lobbying is about," Rachel Reeves MP says. 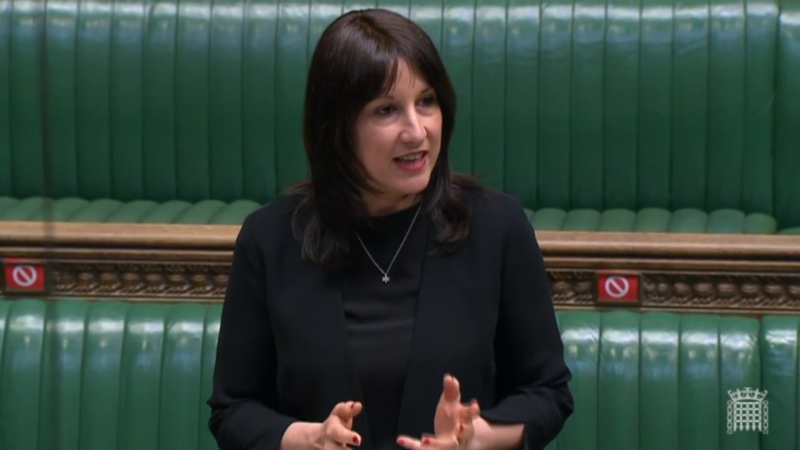 Rachel Reeves MP is Labour Shadow Chancellor of the Duchy of Lancaster. Watch the speech here. The below is her speech in full as part of the Opposition Day debate on the Greensill lobbying scandal.

“The lunches, the hospitality, the quiet word in your ear, the ex-ministers and ex-advisors for hire, helping big business find the right way to get its way.”

This is how former Conservative Prime Minister David Cameron described ‘the next big scandal’ to hit British politics – that was back in 2010.

You might think that what David Cameron lacks in transparency, he certainly makes up for in fortune telling. Except that he had inside information.

The person exploiting the loopholes would be their creator – the one David Cameron. We have a Conservative Prime Minister giving Lex Greensill access to all areas of his government.

He was brought in and given privileged access to the heart of government with the title and business card as a senior advisor in the Prime Minister’s Office. And then what a stroke of luck.

When he was no longer Prime Minister and just passed the period where he no longer needed approval of the Advisory Committee on Business Appointments, David Cameron joins Greensill to lobby the Conservative government full of his friends.

Having refused to respond to any questions for over 40 days, David Cameron chose a period of national grief, hoping that there would be less political criticism and scrutiny.

Mr Speaker it’s cynical and it’s shabby. Even his statement was toe curling. He is not sorry for his conduct, he is sorry to have got caught and I think he is sorry his shares are now worthless.

The question isn’t just why didn’t he go through the correct channels, but why he was doing this at all? Let’s be really clear: David Cameron was not working in the national interest, but in his own personal interest, with the hope of making millions of pounds for himself.

But questions cannot just be asked of David Cameron when it is current Conservative ministers who have paved the way for this scandal.

Mr Speaker, when it comes lobbying it takes two to tango. For every former minister lobbying, there is someone in power being lobbied.

This is why this scandal isn’t just about the conduct of David Cameron during his time as Prime Minister and in the years since then. This is about who he lobbied in the current government and how they responded.

Lex Greensill was awarded a CBE and made a Crown Representative by a Conservative government, yet his company’s spectacular collapse now means over 55,000 jobs are at risk around the world including thousands in the UK’s steel communities – from Hartlepool to Stocksbridge, from Rotherham to Scunthorpe and Newport.

Their work is vital, the steel industry is crucial and the current government must make clear that our steel industry will not pay the price for the failures at Greensill and beyond.

This government have set up inquiry just about supply chain finance and Greensill. But such a review is wholly inadequate – and deliberately so.

They don’t want it to explore what needs to change in lobbying or who currently gets access to power or the wider issue of how to lift standards which have fallen so far in the last ten years under Conservative governments.

Mr Speaker they don’t want public hearings, they don’t want the disinfectant of sunlight as David Cameron once urged, they just want this to go away, which is why they have chosen Nigel Boardman to chair it.

It is a fact that Nigel Boardman, is a good friend, a very good friend of the Conservative government. Some may suspect that the son of a Conservative Cabinet Minister may be unlikely to make waves. But let’s look at his own record.

Mr Boardman has been paid over £20,000 per year as a non-Executive director at the Department of Business, Energy and Industrial Strategy – a department with a real interest in the business bank which lent to Greensill and the British steel industry which is now at risk.

Mr Boardman has already whitewashed the government’s handling of public procurement during the pandemic and I fear he will do again. I jointly chaired the inquiry into the collapse of Carillion and the fact that Mr Boardman’s law firm made £8m advising Carillion – including £1m on the day before the outsourcer’s collapse leaves a terrible taste.

Or at least it should To cap it all off, Mr Boardman was appointed to a prestigious role at the British Museum by guess who? David Cameron. What is being proposed by the government is not remotely fit for purpose.

It’s not independent. It’s barely an inquiry. It’s nothing but an insult.

Mr Speaker, the scope of the inquiry has to be bigger than supply chain financing, but about lobbying too and bigger than which rules may have been broken too.

If the existing lobbying rules were not breached then that is a big part of the problem. Had the Conservatives backed Labour’s amendments to the Lobbying Bill back in 2014 then there would have been much more transparency.

But they didn’t. David Cameron and his government voted them down. And boy are they exploiting them. We need public service in the national interest.

Not people viewing the state like a get rich quick scheme, with taxpayers treated as collateral damage.

We learn that the Conservatives are joined by the SNP whose Rural Economy Secretary in the Scottish government dined with Lex Greensill in one of Glasgow’s finest restaurants with no officials, no notes, no emails, texts or phone records about the meeting.

And here in Westminster we have witnessed the degrading of the Ministerial Code. Sir Alex Allan resigned as Independent Advisor on Ministerial Interests following the Prime Minister’s failure to take action on the Home Secretary’s bullying behaviour.

That was five months ago. The government haven’t replaced him or even advertised his job.

What does that say about how seriously this government takes standards?

Then there is the absence of Ministerial interests meant to be published twice a year, and only published once last year in July. And not at all this year.

Mr Speaker these things matter. They are the foundations on which the standards of government rest. And under this government those foundations are being consciously removed.

That is why this motion today does what the government should have done but chose not to. It gives the power to this House, not the government, with a 16 strong select committee with clout to investigate this whole sorry scandal.

It would have powers to call witnesses and examine them in public like an effective select committee would. The scope of the investigation that we propose would looks at inappropriate lobbying of government and what needs to change to prevent it. It would have the powers needed to demand witnesses and communications.

It would examine the Advisory Committee on Business Appointments and whether they have sufficient powers, resources and the right remit. Put simply this special new Select Committee, would aim to tackle the problem staring us in the face, not to cover it up.

As a former Select Committee Chair, I know how seriously colleagues around this House would take this role and responsibility. We are prepared to make a concession to Honourable Members opposite.

We will accept that this committee can be chaired by a backbencher from the governing party as long as there is cross-party representation on the committee as with other select committees. The Conservative Party are at a fork in the road.

If MPs vote for this motion then a proper investigation can take place, led by a team with the confidence of this House, not someone handpicked from the board of one of the government departments embroiled in this scandal.

But if they vote against it, as the Prime Minister has told his own MPs to do, then I am sad to say, that they too will be part of this government’s attempt to cover up Tory sleaze. All members here today should reflect on who they are here to serve: their constituents, their country – or their narrow party interests. The stakes are high for our democracy and for our public life.

It was a past Conservative government, embroiled in sleaze in the 1990s which eventually recognised the needs for standards to rise and create the Nolan principles.

The Nolan Principles of public life have to live and breathe through all those in public office and serving our great country. Yesterday we learned that the government’s former Head of Procurement was an adviser for Greensill Capital while a civil servant. And incredibly, that was approved. And the defence is that it was ‘not uncommon’.

What on Earth has been happening at the Cabinet Office and at the heart of this government to allow these conflicts of interest to fester?

Sir John Major who witnessed the cash for questions scandal and other Tory sleaze in the 1990s when he was Prime Minister also thinks the rules need to be changed again.

There is a wider pattern of behaviour with the Conservatives here in the present as well as in the recent past. A Conservative government which is more interested in private drinks with the owners of private jets, than meeting the families of those bereaved by Covid.

A government which gave a 40 per cent pay rise to Dominic Cummings, yet a pay cut for nurses. Tory politicians thinking it’s one rule for them, another for everybody else.

Personal attention lavished on friends of Cameron while three million excluded from government financial support can’t even get a meeting. £2 billion of public contracts to the friends and donors of the Conservative Party.

Rolling out the red carpet with a VIP fast lane for contracts, supposedly independent reports rewritten by Downing Street. Undeclared details on who has paid what for the luxury refurbishment of the Prime Minister’s flat. Relationships undisclosed. Increasingly frequent breaches and casual disregard of the Ministerial Code.

Some have asked this week, quite powerfully, “when did we stop caring about honesty and integrity?” That is what this motion is about.

What happens in the vote will say so much about our great country but also about our government. That is why I urge all Honourable Members to do the right thing today and back this motion.

Vote for a proper investigation, to close the loopholes, to reign in the lobbyists and lift standards in this great democracy in which we all have the privilege to serve.