Best for Britain relaunches armed with research showing Britons support effective international action that should act as a wake-up call for government. 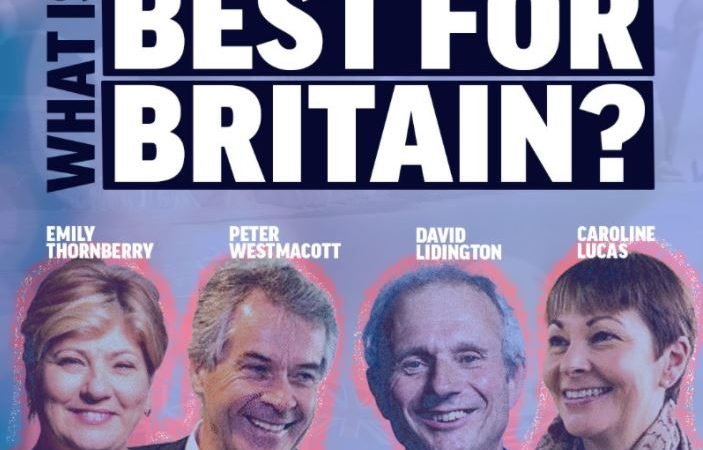 Best of Britain, the UK’s leading cross-party advocacy group upholding internationalist values, has relaunched to champion a closer relationship with Europe and the world.

Today’s relaunch event was initiated alongside a heavyweight piece of research by Best of Britain that shows there is overwhelming support for internationalist values among Britons and desire to stand up to government on internationalist issues.

The landmark ‘Global UK: Voters’ Views on Working with the World Spring 2021’ report questioned respondents on their thoughts on the most pressing issues facing post-Brexit Britain and its position on the global stage.

The poll, which was commissioned for today’s relaunch of the anti-Brexit organisation, surveyed 3,000 British adults, both Leave and Remainers, on their thoughts about international cooperation.

People more complicated than the party they vote for

The research shows that a majority of Leave voters back closer ties with Europe on areas that are “mutually beneficial” such as trade. It found that two thirds of small businesses think the UK should cooperate with Brussels on trade, foreign policy, and climate change. Just 7% said the UK should avoid cooperating with Brussels. 78% support global cooperation to tackle the pandemic. 76% support working with other countries to deal with threats from Russia and China. 79% of people want the UK to work with international bodies to tackle climate change.

The underlying message of the research is that people are more complicated than the party they vote for and that no matter how people have voted in recent years, there is a desire to pull together.

Discussing the findings of the research and the aim of the “refocused and reenergised” Best of Britain on a Zoom webinar, was a panel of renowned internationalists, including Naomi Smith, Chief Executive of Best of Britain, Emily Thornberry, Shadow International Trade Secretary, David Lidington, former Deputy Prime Minister, Caroline Lucas, Green Party MP, and Peter Westmacott, former British Ambassador to the United States.

Heartened by the report’s findings

The panellists were encouraged that people strongly believe the UK is internationalist, which reiterates the need for the UK to engage with like-minded allies to prove it is truly internationalist.

“It is essential the UK is active, nimble and forward-thinking to secure common objectives,” said Sir David Lidington.

Emily Thornberry echoed the need to move forward, saying priorities need to start with fixing trade with the European Union. “We don’t want to be stuck in the past; we have a choice about the direction our country will take next. We need to choose the route that is best for our economy,” said Thornberry.

The unrest taking place in Northern Ireland, marking long-simmering tensions that have been brought to the boil by Brexit, was a key discussion point of the relaunch event. Peter Westmacott noted the international sensitivity of the conflict in Northern Ireland.

“Anything that the UK is doing about making Brexit work, the withdrawal agreement, about protocols with Northern Ireland, must take account of the extreme sensitivity in the US” and ensure “nothing jeopardises the Good Friday Agreement,” said Westmacott.

A ‘wake up call’ for government

Naomi Smith, CEO for Best of Britain said the findings of the report should serve as a “wake-up call” for government.

Whether addressing the climate emergency, defending democracy, human rights, or defeating organised crime, the fundamental aim of the relaunched lobbying group is the call for greater ties between Britain, Europe and the rest of the world, and that the UK’s national interest requires effective international action – something which the majority of Britons aspire.