Pictured: One of the new spoof ads in Herne Hill, South London. 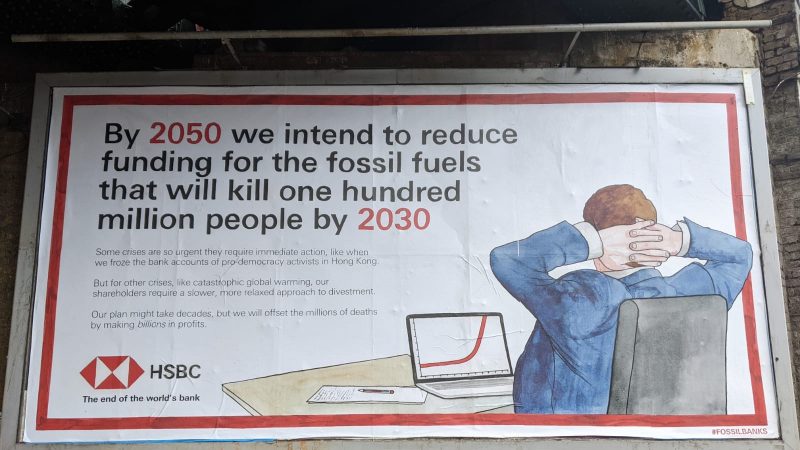 Spoof ads reads: “By 2050 we intend to reduce funding for the fossil fuels that will kill one hundred million people by 2030.”

Over 250 posters slamming HSBC’s record on climate change have appeared billboards and bus stops across the UK, according to ad-busting activists.

Dozens of anonymous installation teams in 15 British cities have installed a range of HSBC poster artworks in a ‘right of reply’ to the bank’s recent ‘We Are Not An Island’ ad campaign.

Initiated by campaign group Brandalism, it highlights the ‘things we don’t see’ in HSBC’s official adverts, including the bank’s billions in fossil fuel investments.

Activists point to the £67 billion in fossil fuel projects HSBC has made since 2016 – including financing for fracked gas, oil drilling, and gas extraction projects.

The artworks also reference HSBC’s significant investments in for-profit US prisons and detention centres which have been strongly criticised for separating families and using incarcerated migrants as a source of cheap labour.

Other contributing artists such as Jimmy Cauty referenced HSBC’s investments in major weapons companies like BAE Systems, whose munitions have been used to commit serious human rights abuses. Campaign Against Arms Trade says BAE’s Typhoon and Tornado aircraft have been central to Saudi Arabia’s devastating attacks on Yemen.

Some of the ads also target HSBC’s alleged ‘hypocrisy’ on Black Lives Matter.

After the murder of George Floyd in the US and the protests that followed across the world, HSBC’s Chief Executive Noel Quinn declared support for the Black Lives Matter movement and said: “I want us (HSBC) to be judged by the concrete, sustainable actions we take”.

But Brandalism says this flies in the face of HSBC’s investment in detention centres in the US which disproportionately incarcerate people of colour. HSBC are understood to own investments in private prison firms GEO Group and CoreCivic, viewed as being at the core of the US’s racist ‘prison industrial complex’. As of 2015, there were more African Americans in prison than in college.

HSBC has also come under fire for supporting Hong Kong’s new security law, which has led to major repression against the pro-democracy movement by the Chinese authorities.

It follows a similar wave of ad-busting in November, as activists in 15 UK cities took over billboards and bus stops with spoof HSBC ads.

Tona Merriman from Brandalism, said: “Advertising is a key mechanism for big banks to shore up their public image. HSBC likes to position itself as a friendly high street bank through its marketing, but these artworks tell a much darker tale of human rights abuse facilitated by the bank’s activities…

“While the number of people switching to HSBC increased 140% as a result of their ads, did anything really change about the bank and the priorities of its finance? No. So we created a right of reply for the public, here and abroad, to provide a corrective to HSBC’s billboards.”