The findings come as an official government review tries to downplay the impact of racism in the UK. 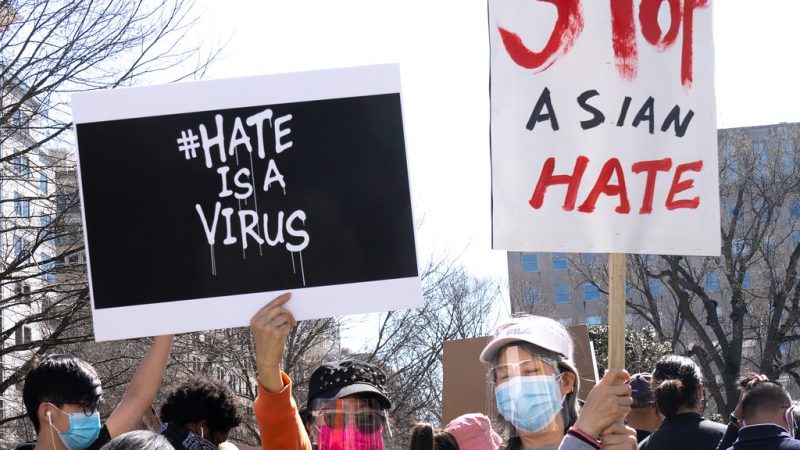 Many East and South East Asian (ESEA) people are afraid to “go out of the front door”, with new figures revealed a surge in racist hate crimes in London despite lockdown.

New analysis of the Metropolitan police’s hate crime database by Left Foot Forward found that racist and religious hate crimes had increased in the capital over the last year, even though the pandemic has stopped many people from regularly leaving the home.

The findings come as an official government review – released today – tries to rebut claims that the UK has “failed to make progress in tackling racial inequality.”

Boris Johnson’s Commission on Race and Ethnic Disparities will criticise “the well-meaning ‘idealism’ of many young people who claim the country is still institutionally racist,” concluding their views are “not borne out by the evidence.”

Jabez Lam, a pioneering activist in the field of anti-Asian racism, told Left Foot Forward that members of the ESEA community were regularly being spat at, coughed on, blamed for the pandemic, insulted and abused in the street, while some faced regular physical assaults because of their race.

The Metropolitan police’s data doesn’t record anti-Asian hate crimes specifically. However, the fact that other subcategories of racist and religious hate crime (including Islamophobia) have seen a reduced number of cases, combined with previously recorded surges in anti-Asian hate crime during the pandemic, suggests the increase may have been driven by rising hatred towards the ESEA community.

Jabez Lam, who has been an anti-racist activist for over 40 years, warned that members of the ESEA community were scared that the easing of lockdown would lead to an increase in racist attacks and  that the scale and severity of the anti-Asian racism being faced “far exceeds anything in my memory”.

Responding to the rise in anti-Asian hate crimes, Mr Lam told LFF: “It doesn’t surprise me at all. After the foot and mouth disease emerged after half a century [in the early 00s] the media blamed it on Chinese catering… but even knowing this would happen it was worse than I thought, insofar as the scale of attacks, the frequency and the seriousness, far exceeds anything in my memory…

“At the moment right across the country ESEA communities think the easing of lockdown is insanity. Many fear that when the lockdown lifts the racial attacks are going to increase.”

The head of Hackney Chinese Community Services added: “In relation to whether the police and the government have done enough, they have said the right thing condemning the rise in hate crimes… but in terms of action it’s pretty varied.”

While some cases like the brutal attack on Singaporean student Jonathan Mok on Oxford Street last year were swiftly dealt with, many cases were allegedly mishandled by authorities.

In one case, Mr Lam was supporting a 65 year old gentleman who had been attacked and beaten on six occasions leaving him with a broken arm had his case closed after 2.5 months without the Metropolitan police ever interviewing him.

He also cited the example of an unnamed Liverpool student who was arrested for defending himself against a racist attack.

Mr Lam concluded: “It’s becoming something so frequent and we actually have a lot of people telling us they’re afraid to go out the front door and last week a university student said that because of this fear of attack they have locked themselves in their student hall and are afraid to go out at all.”

The lifelong activist told LFF he was calling on London councils to do more to stop hate crimes escalating after one of the attacks he was dealing with occurred on a council estate.

Responding to the new figures, a spokesperson for London Labour on behalf of Mayor Sadiq Khan said: “Sadiq is appalled by those who would use the coronavirus pandemic as an excuse for spreading sinophobic sentiment or encouraging racist abuse towards East and South East Asian communities.

“Sadiq is determined to stand up for all Londoners in our city and takes a zero-tolerance approach to hate crime in all its forms and is working with the Metropolitan police to stamp it out.”

Hate crimes against the trans community saw an increase of 2.5%, from 283 total reported incidents in 2019 to 290 total incidents reported in 2020.

The Metropolitan police did not respond to LFF’s request for comment.

Pictured: A US anti-racism protest earlier this month, after the murder of six people of East Asian descent in Atlanta. Credit: Victoria Pickering.