After a three-year campaign, the Bank agreed to shift billions away from fossil fuels. 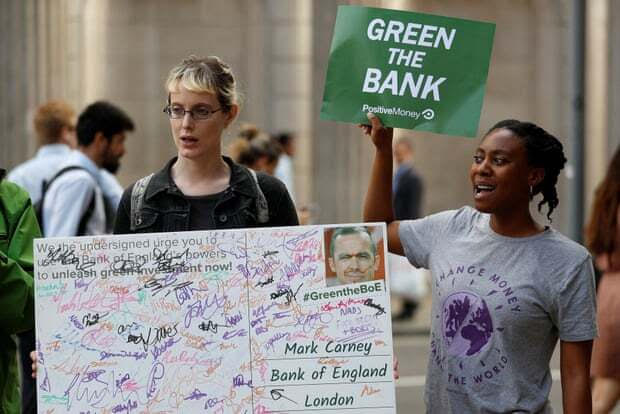 Hannah Dewhirst is a campaigner at Positive Money

Last week, Chancellor Rishi Sunak gave the Bank of England the green light to use its powerful monetary policy toolkit to tackle the climate emergency.

In a Budget statement that was otherwise thin on environmental commitments, Sunak responded to growing pressure from campaigners, academics and MPs on the issue of greening the financial system.

With an updated mandate, the Bank will be able to use its powerful monetary policy tools to support the government’s climate commitments and the net zero transition – the first central bank in the world to do so.

Central banks are sometimes overlooked by activists, but they have a huge role to play in shaping the flow of money and the wider economy. With the ability to realign billions of pounds away from fossil fuels and towards green alternatives, they could make or break the government’s climate commitments.

That’s why this is such a significant turning point and a huge victory for the environmental movement. Positive Money has been working towards this for years alongside brilliant partners.

Our 2018 report “A Green Bank of England” set out what a climate-friendly central bank would look like, and started building pressure for reform. Across 2019, we protested outside the Bank together with supporters, activists and divestment group Fossil Free London, in the summer and at Christmas.

When Andrew Bailey took over as the Bank’s new Governor last year, our hopes grew initially as he promised to make greening the Bank’s activities “a priority”, in response to an open letter we helped coordinate, signed by more than 100 leading figures.

But Bailey’s initial enthusiasm waned, and he stalled on taking even basic steps, like dumping risky fossil fuels assets from the Bank’s corporate bond portfolio. When our research exposed that the Bank’s Covid bailout scheme for corporations was giving huge handouts of public money to big polluters like Shell and BP, we knew that the new mandate was more urgent than ever, and turned our attention to the Treasury who held the power to make this change.

In November, together with the New Economics Foundation, we coordinated an open letter signed by 125 leading economists, calling on the Chancellor to decarbonise the financial system and boost green investment, starting with a new Bank of England mandate.

As the UK was hit with severe flooding at the beginning of the year, we wanted to make it clear that by failing to act on climate change Sunak was  putting his own constituents at risk of severe weather. Hundreds of Positive Money and SumOfUs supporters donated to splash an advert across the frontpage of Rishi Sunak’s local newspaper, to make sure he couldn’t miss our message: “stop bankers causing flooding misery”.

With momentum building, Conservative MP Philip Dunne, Chair of the cross-party committee responsible for scrutinising environmental issues across government, called on the Chancellor to add climate and nature objectives to the Bank’s core remit in January. This came after Positive Money director Fran Boait gave evidence to MPs on the committee exposing the Bank’s inertia on the environmental emergency.

Then, alongside campaign groups SumofUs and 350.org, we delivered Sunak a petition, adding the voices of 65,000 people up and down the country to our campaign.

This week’s announcement is proof that the pressure has worked, and the government has listened. As the institution underpinning the UK’s money and banking system, the Bank of England leading by example and shifting its own policies towards net zero, will reverberate across financial markets and the wider economy.

The focus now swings back to Bank officials to turn this mandate into concrete action. At a minimum, the Bank should now exclude fossil fuel assets from the Bank’s £20 billion corporate quantitative easing scheme, use its money creation powers to instead catalyse investment in green job-creating projects through the new National Infrastructure Bank, and encourage green lending. A new report by Frank van Lerven and other researchers spells out what the Bank could now do in detail.

This change comes just in time, with all eyes on the UK ahead of the crucial COP26 summit in Glasgow this November. Now that it has the go ahead from government, the Bank of England must step up and lead the way on greening the financial system.