One Conserative told Sky News: "In Scotland, Boris is toxic". 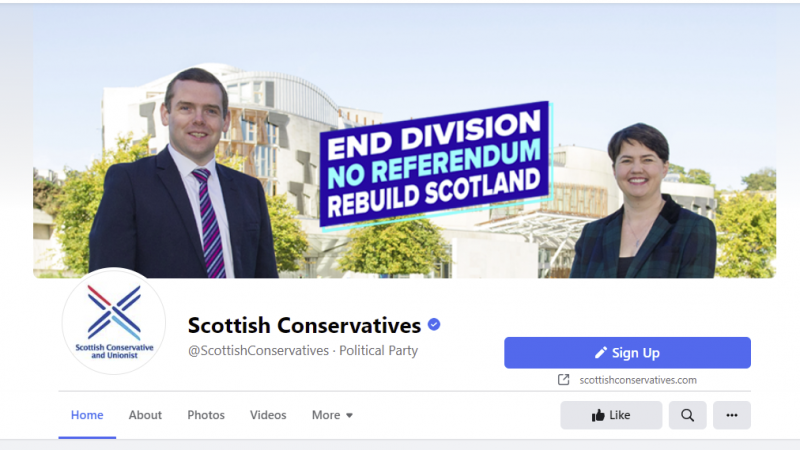 With almost twice as many Scots disapproving of Boris Johnson as those that like him, the Scottish Conservatives aren’t drawing attention to him on the campaign trail.

Their main Facebook and Twitter photo (above) is of Scottish Tory leader Douglas Ross and Ruth Davidson, the far more popular Remainer who used to lead the Scottish party, but is now joining the House of Lords.

Left Foot Forward’s analysis of the party’s last 3,200 tweets shows they have only used the word “Johnson” three times and the word “prime minister” once.

In contrast, they’ve used the word “Douglas” over 400 times, “Davidson” nearly 200 and “Sturgeon” over 600 times, showing how negative their campaign has become.

Individual Tory candidate’s election leaflets follow a certain format, with the slogan at the top, the candidate’s name and then five pleges. The word ‘Conservative’ is in small font and no Westminster or Holyrood names are mentioned.

Last month, an unnamed Conservative told Sky News that “in Scotland, Boris is toxic.” In December 2020, Douglas Ross said he was “not bringing up the Prime Minister” on the campaign trail.

Commenting on that, SNP Deputy Leader Keith Brown MSP told Left Foot Forward: “No amount of bluster will distance the Scottish Tories from Boris Johnson – it is an insult to think that if Douglas Ross just doesn’t mention his boss then voters in Scotland will forget about him.”