Priti Patel wasted no time putting out populist distortions following a fire at the weekend. 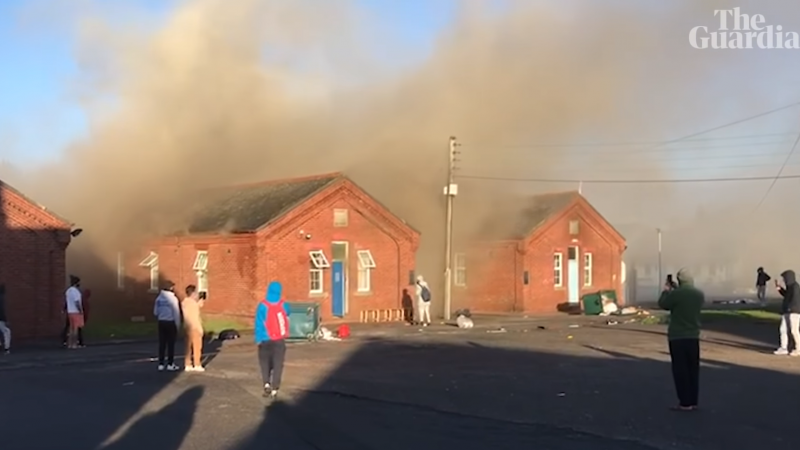 Hundreds of asylum seekers were told to form ‘bubbles’ and go into lockdown for ten days – despite over a third having coronavirus. They were asked to self-isolate while continuing to sleep and eat in restricted communal space indefinitely, in a former army barracks that was scheduled for demolition. The chance of some unrest seemed likely.

As such, visiting charities weren’t surprised by reports of a fire at one building on Friday at Napier Barracks in Kent. The barracks was repurposed to house 400 asylum seekers in September and has caused concern among human rights activists.

Some 14 arrests have followed investigations into the fire over the weekend. Separately, a journalist outside the gates on previous day was also arrested and later released.

“Bad things are going on in there,” he told the BBC about conditions inside the camp. The arrested journalist, Andrew Aitcheson, had documented a protest in which demonstrators threw buckets of fake blood over the camp’s front gates, describing the conditions as grim.

According to the police, there was no evidence of organised rioting, despite it being reported as such by the Daily Mail and The Sun. Instead, there was a broken window and a building on fire.

Within very little time, the fire at the camp was seized upon by Home Secretary Priti Patel as a way both of attacking the migrants behaviour through the right-wing press, justifying the ongoing hostile treatment – and impressing the tabloids and the hard-right, with Tory indifference to human suffering in relation to immigrants.

In a three-paragraph statement, she carefully made sure to reflect entirely where her sympathies rest – the readership of the Daily Mail, essentially. Take paragraph one for example: “The damage and destruction at Napier barracks is not only appalling but deeply offensive to the taxpayers of this country who are providing this accommodation while asylum claims are being processed.”

In this understanding, it is only ‘taxpayers’ who Brits should be concerned about – not the vulnerable who are in our care.

“This type of action will not be tolerated, and the Home Office will support the police to take robust action against those vandalising property, threatening staff and putting lives at risk.”

Here, Patel is reducing the complexity of the issue, distorting the truth. The asylum seekers’ action was reduced to wanton vandalism – even though its actually their lives are at risk from Home Office policy. No serious injuries have been reported from the events.

Patel went on: “This site has previously accommodated our brave soldiers and army personnel – it is an insult to say that it is not good enough for these individuals.”

Another spin. She knows well that right-wing papers adore anything to do with the army and military history. But here’s the thing: there is no record of the building being used since the 1990s. It’s been scheduled for demolition with the land to be developed by builders Taylor Wimpey at a later date.

Patel’s comments have drawn criticism from the charities Freedom from Torture and Detention Action, who quite justifiably have accused her of politicising the incident.

In the meantime, the Home Office has started moving out some of the asylum seekers believed to have tested negative for coronavirus. It won’t relocate all, or say how many are infected. It would look bad in its favourite newspapers.