The former Brexit Party leader is still manufacturing outrage. This time it's vilifying refugee charities amid the pandemic. 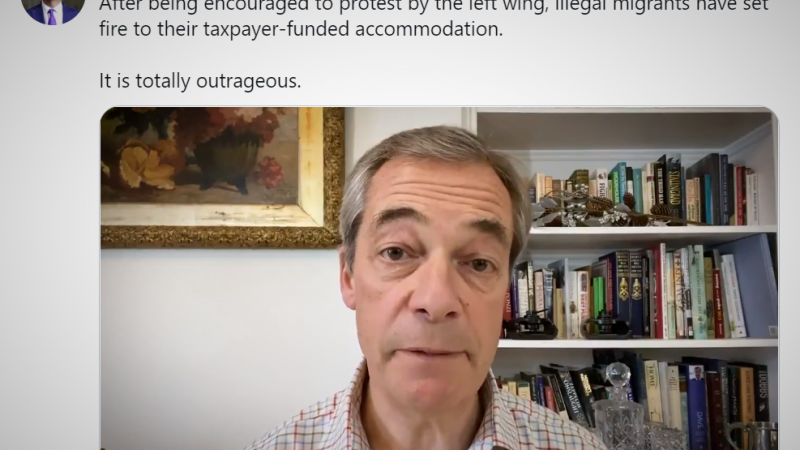 In a departure from more routine scaremongering, Nigel Farage’s latest anti-immigration videos take a different turn – by trying to implicate refugee charities in his attacks.

In the first of two videos uploaded to Twitter last week, Farage labels a number of UK charities as ‘little left-wing groups’ that he claims effectively ‘encourage’ people smuggling.

The former Brexit Party leader goes on to imply they incited asylum seekers to protest and start a fire at a ‘migrant camp’ in Kent last week, with Farage urging the police and authorities to investigate them.

The video was made prior to another video he posted on the weekend of an interview he gave to the US pro-Trump cable channel Newsmax in which he argues that President Joe Biden’s reversal of Trump’s anti-immigration policies are part of a so-called globalist plan to make cheap labour abundant.

Meanwhile, the first video focuses on two migrant camps set up in the UK: one at Napier Barracks; a disused army barracks in Kent, which has housed 400 asylum seekers. The other is at a disused army site in Penally, Wales, housing 200 people.

A fire occurred within Napier Barracks last week. One man has been charged. Subdued protests have occurred at both camps over the state of their living conditions.

“They have been encouraged in many ways by groups here in the UK, and this is what is outrageous: we have all these groups – little left-wing groups, they give themselves a variety of names: Care4Calais, Kent Refugee Action etc, etc,” said Farage.

“These groups are effectively encouraging the illegal trade across the Channel, encouraging the criminal gangs to make yet more profits, but worse still: they are encouraging people inside these camps to stand up and protest and ask for better conditions,” he said.

As with previous videos, he presents alternate numbers and narratives. He states that army barracks are only being used because UK ‘hotels are getting so full up’ with asylum seekers, that Napier Barracks was until recently fit for the army; that protests stems from a craving for the UK’s ‘four-star hotels, with flat-screen TVs.’

Time for a factcheck. UK hotels are empty: occupancy is at an all-time historic low. They’re being avoided because of fear of Farage and right-wing media coverage.

The barracks haven’t officially been used for decades and were slated for demolition. The ‘heritage’ of the barracks only resurfaced after a Farage video using it in connection with plans to put migrants there in September.

Since then, multiple human rights groups have drawn attention to the inadequate living conditions within them and the danger of unhygienic, multiply-shared rooms and toilets. After constant concerns of a Covid-19 outbreak, one inevitably occurred in mid-January.

Charities and asylum seekers talking to press have enabled estimates of the numbers infected with coronavirus or being relocated. Some 120 people were believed to be infected in late January, following which, the Home Office began relocating some of them.

The local council of Folkestone & Hythe, however, informed that 100 asylum seekers who had tested ‘negative’ would being relocated. According to one charity, the plan also involved relocating the oldest, seen as having the highest mortality risk. Those left behind weren’t able to self-isolate, but reduced numbers were seen as adding more space within rooms. The plan reportedly didn’t account for underlying health conditions.

But Farage’s alternate narrative claims otherwise: that after the outbreak, a hundred asylum with coronavirus were quarantined; another hundred relocated to a ‘super little Kentish seaside town’ hotel, with the remaining 200 so enraged with jealousy they ‘set fire to their accommodation.’

“But what is really, really, really maddening is that they’re being encouraged to behave like this by refuge action groups in this country and I wonder are the police, are the authorities going to take any action on this? Because I really, honestly, genuinely and truly think that they should,” Farage huffed.

He goes on to claim that following the fire, the Home Office ‘caved in’ by moving them out to a holiday park with ‘chalet-type accommodation.’

Factcheck: most are still there, but some asylum seekers have won court injunctions to be rehoused, as evidence emerges of just how bad conditions there have been.