A new group is campaigning for compensation for those denied furlough - demanding the Chancellor takes a leaf from the US' book on income support. 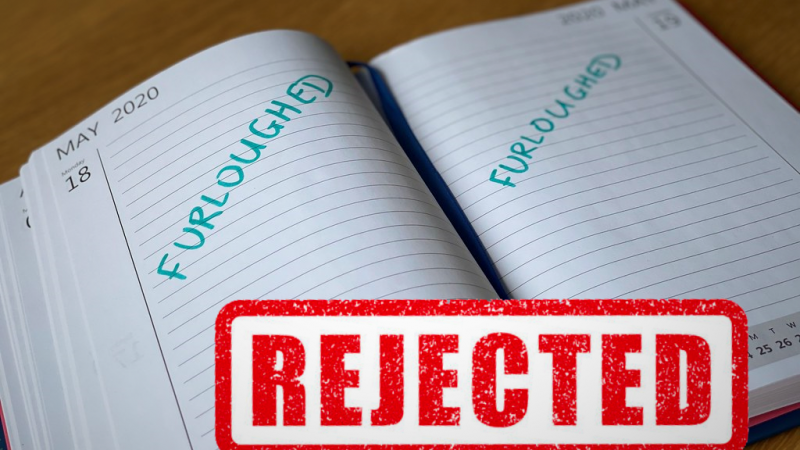 Millions of workers may have been unfairly denied access to the government’s furlough scheme by employers, according to a new report seen by Left Foot Forward.

The Refused Foundation Support Group (RFSG) is seeking legal advice for members who they say were sacked, put on Statutory Sick Leave, or forced to continue in unsafe working conditions due to employers pulling all the strings under Rishi Sunak’s Coronavirus Job Retention Scheme.

RFSG says there have been cases of outright discrimination where people have been refused furlough and instead simply laid off. They also allege that some employers have sacked those who have spoken out over health and safety rather than offered them furlough.

Furlough rules say employers should ‘discuss with their staff’ potential furlough arrangements – but there is no obligation to offer furlough instead of laying people off.

A new paper by the group estimates that 800,000 employees may have been refused furlough in the first four months of the scheme. In total, the authors estimate that as many as three million workers may have been denied furlough by employers and instead lost their jobs, based on analysis of ONS and unemployment data.

The authors draw comparisons with the US, where there were universal relief cheques of $600 per week at the height of the pandemic. Meanwhile, those on Universal Credit in the UK received a top up of just £20 per week.

RFSG say the reliance on employer discretion about whether or not to furlough staff has led to cases of discrimination. Economists have previously found that three-quarters of furloughed men had their wages topped up, beyond the 80% provided by the government under the scheme, while only 65% of women received a top-up.

A spokesperson for the group told LFF: “There is an estimated three million employees unable to access the UK furlough scheme including 1.3 million foreign born workers. Our comparison between the UK and the USA shows the true scale of the imbalance, with a £20 weekly uplift to benefits in the UK – compared with a $600 weekly uplift in the USA.

“We have also identified further inequalities towards women and those with disabilities due to the UK policy to allow corporations to control the distribution of taxpayer’s money during a global pandemic.”

“For these reasons, it’s important that the Chancellor doesn’t miss yet another opportunity to support this people.”

High profile cases of furlough being allegedly denied include Coylumbridge Hotel in Aviemore, Scotland, which dismissed workers at the height of the pandemic who depended on staff accommodation, leaving some homeless. (The hotel apologised and blamed an ‘admin error’.) Travel company Tui also came under fire last year for refusing to furlough hundreds of seasonal staff, stating it should only furlough ‘viable’ jobs.

RFSG is urging the Chancellor to issue immediate backdated payments of 110% of the value of lost furlough income to all those who were refused furlough from March 2020, alongside a ban on zero hours contracts. While zero hours workers can be furloughed, many employers have chosen to simply not pay staff. Groups like Zero Hours Justice have highlighted that often, the reason given for refusing furlough was the lack of any contractual right to pay for work not performed.

The report, titled ‘Addressing Inequality with ECESS’, notes that the Job Retention Scheme did not prevent employers from making redundancies, even when the option to pay a furlough salary was possible.

The Lib Dems’ Jamie Stone MP threw his weight behind the campaign, telling LFF: “I have worked closely with employees who have been refused furlough by their employers. There is a major concern here, especially when it comes to refused employees who have also not been issued a P45, leaving them trapped with no income.

“It is clear that the Government made a major error when they left the decision to furlough down to the employer. It is impractical to take up arms against each employer one by one. I attempted this in November when I wrote to [travel company] Tui asking for a meeting to urge them to put their seasonal workers on furlough so that they wouldn’t face at least 4 months without a penny. Safe to say, this meeting was turned down.

“The APPG [Gaps in Support] is working tirelessly to find urgent solutions to all those excluded, including employees who have been refused furlough..I am hopeful that we will be in a position to put a solution to the Treasury as soon as possible.”

Commenting on the findings, the SNP’s Tommy Sheppard MP told Left Foot Forward: “I welcome this report as a vital contribution to rectifying a grave injustice in the support given to working people during the pandemic.

“The fact that the government has been so generous with CJRS and SESS makes it all the more bizarre that it refuses to offer any help to those who have fallen through the gaps. This report provides evidence which should make the government change its mind.”

Rishi Sunak is expected to extend furlough until at least July in his budget next week – but it’s unclear if new conditions will be put on employers to ensure furlough is granted when needed.

The report is available here.

Were you unfairly denied furlough by an employer? Get in touch [email protected]

Edit: An earlier version of this piece quoted the figure for those refused furlough as being 980,000. This was a typo – the figure estimated is 800,000.