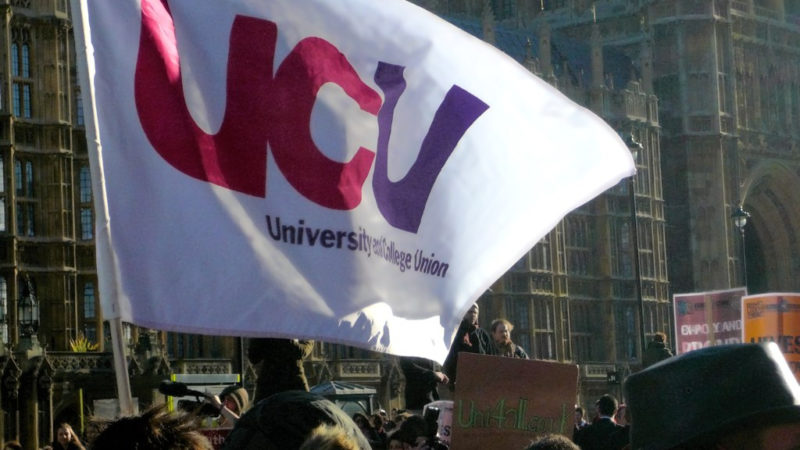 David Hirsh is a UCU member, Senior Lecturer in Sociology at Goldsmiths, University of London, and author of ‘Contemporary Left Antisemitism’.

Last week, my trade union at UCL persuaded colleagues to vote to disavow the IHRA definition, which warns specifically against the antisemitism which appears as hostility to Israel.

When the University and College Union (UCU) asks me to strike, I strike. But it’s good that solidarity is not transactional because my union has never shown any solidarity with me. In my whole life, I have never been in a more hostile and antisemitic space than my union.

In UCU I have been transformed from loyal member and fellow scholar into something called a ‘Zionist’. This designation is thrust upon me without my consent and is only tangentially related to how I understand myself. It constructs me as a racist and a supporter of imperialism.

In 2003, the Israel boycott campaign sought to provoke such emotion against our Israeli colleagues and comrades that UCU members would feel like punishing ‘them’ for the crimes, real and imagined, of ‘their state’.

Surely such a campaign would worry about its potential attractiveness to antisemitism, but this campaign denied even that possibility. The boycotters turned against their critics, demonizing us as enemies of Palestine and of solidarity, and portraying us as alien to the very foundational principles of trade unionism.

In 2005, we argued for solidarity with Palestinians against the occupation, solidarity with Israelis against antisemitism, and solidarity with both peace movements against war. We highlighted Israeli- and other colleagues’ involvement in joint academic work and teaching with colleagues in Palestine. We hoped to facilitate solidarity between Israelis and Palestinians. We opposed the flag waving politics which designated one nation as good and the other as bad. We called a special council meeting of the union and we won the day.

But the boycotters did not accept defeat. They came back, year after year. They targeted union members in Britain who they designated ‘apologists’ for Israel.

The campaign to boycott Israel was wrong in itself, but it was also forged within an authentically left wing tradition of antisemitism. It also normalized, licensed and propagated antisemitism into the future. But although left antisemitism is old, it has always been fiercely challenged by democratic currents, also on the left.

That the union never adopted the boycott is our victory. But our campaign against the antisemitism which came with it did not win. By 2009, nearly everyone I had fought alongside against antisemitism had gone. Many had resigned in protest or in exasperation; many had been bullied out; many had been silenced. Many were just tired and not prepared to devote their life’s energy to fighting the Israel-obsessives in the union.

I was bureaucratically excluded from the internal union email ‘activist list’ because I published some of the antisemitism I witnessed there.

The union leadership protected the space within which antisemitism was allowed as ‘free speech’ and ‘criticism of Israel’. A number of anti-boycotters were excluded from the list – but nobody was ever excluded from it because of antiemitism. I am still, fifteen years later, excluded. You get a shorter sentence for murder.

We were told by activists that we opposed the boycott because we thought we were the ‘chosen people’ and that our racism originated in the Torah and the Talmud.

We were told we were like the Nazis at Theresenstadt, whitewashing Israel’s evil; our gay comrades were told they were ‘pink-washing’ Israel.

Though the comments came from activists, the leadership allowed this culture to flourish.

Some non-Jewish friends campaigned bravely alongside us. I saw people close to me being pushed out, turning to drink, cigarettes and drugs, having breakdowns, becoming clinically depressed, losing lifelong friends and being excluded from the community of scholars.

The antisemitism spread into the wider trade union movement and then into the Labour Party. The story of how it coalesced into the Corbyn faction and came close to Downing Street is now well understood.

It has been told in books, journalism, the Jewish press and social media. It has been told in the testimonies of the victims of antisemitism who were excluded and demonized, not least the women, Luciana Burger, Margaret Hodge, Ruth Smeeth, Joan Ryan and Louise Ellman, Rachel Riley and Tracy-Anne oberman, who were subjected to relentless waves of misogynist and sexually violent antisemitism.

And the story has been told by the Equalities and Human Rights Commission (EHRC), the statutory body set up by the last Labour Government to defend the Equality Act. EHRC focused on the way the culture in the Party had othered opponents of antisemitism by treating them as a conspiracy to ‘smear’ and to ‘fake’. EHRC also said that antisemitism took hold in the institution and culture of the Party, that it was not only hatred that was important but also the roles played by ordinary members and officials.

Now that movement is re-grouping back on campus and in the UCU. The rump of Labour antisemitism is trying to disavow the most explicit Jew-hate that coalesced with it when it went mainstream, and to purify itself again in an academic and respectable discourse of ‘criticism of Israel’.

The IHRA definition of antisemitism is a response to this kind of antisemitism. It offers eleven examples of the kinds of things which Jews know and scholars have shown are often antisemitic. It says that when such examples are seen, then a judgment should be made according to the context of the particular case. That is why the UCU antizionists fear IHRA.

The UCU never faced up to what it became or what it did. The clever people on campus and in the union are carrying right on – teaching our young people that between ‘us’ and ‘socialism’ stands ‘Zionism’.

Ed: In response to the allegations in this piece, a UCU spokesperson said: “Antisemitism has no place within UCU. We are fully committed to tackling antisemitism in all its forms, and to ensuring that both our union and our members’ workplaces are inclusive environments for Jewish people. The rules of the union require all its members to refrain from all forms of harassment, prejudice and discrimination, and this includes antisemitic speech or behaviour.”