The IWGB's 'holding branch' is one way of doing it. 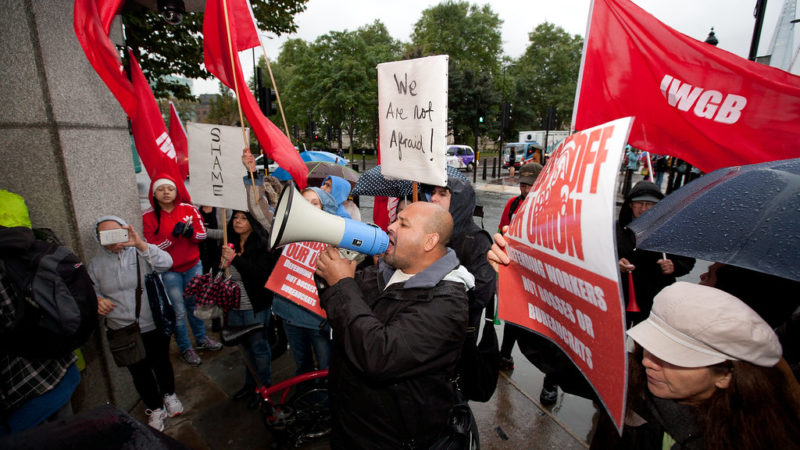 When the scale of the Covid-19 pandemic became clear, the Independent Workers Union of Great Britain (IWGB) began planning ways to respond. Meetings were quickly shifted online. Members and staff had to adapt to organising through lockdowns.

The IWGB has a history of organising with precarious and often migrant workers. Much of the existing membership work in frontline services or the gig economy. This includes cleaning, security, couriers, and private hire driving. Throughout the pandemic, these workers had to fight for their health and safety. There have been successful campaigns securing protecting equipmient and getting access to furlough.

In addition to the IWGB’s existing branches, there was an increase in workers contacting the union. Many said they had been thinking about getting organised but the shock of the pandemic had now spurred them into action. The existing structures of the union made it difficult to quickly integrate these workers into the union. Before, workers would have to build a critical mass to form a new branch of the union to join.

In response, the IWGB established the “holding branch”, a new general member branch of the union. The idea is that anyone can join this branch – so long as they are not excluded from another branch, like being a manager with hiring and firing power, for example. Their membership of the union begins immediately. They can start organising in their workplace. The aim is to build their own branch of the IWGB.

The approach to this new worker organising – sometimes called “greenfield” organising – follows the existing IWGB model. As they explain: “The holding branch is for workers who want to start organising. The people best placed to transform their sector are those, like you, already working in it. The union will not be able to do this for you, but we can provide the support and advice for you to start organising at work and change your industry!”

This is a model of trade unionism that focuses on the democratic participation of workers in campaigns. New campaigns need to build on the experiences and activity of workers to be sustainable and win. The holding branch is an attempt to connect this model to the experiences to new parts of the economy, particularly where workers have not formally organised before.

This means trying to understand the challenges and opportunities for workers in unorganised workplaces. Many of the stories will be familiar to workers across the UK: abusive managers, lack of health and safety protection, issues with pay and benefits, difficulty getting time off, and so on. In many cases employers are breaking the law, but workers have little recourse to justice. Each industry or workplace has its own features, but talking to other workers about their conditions remains a crucial starting point.

As a project, the holding branch is an experiment in new forms of organising. Many people have complained about the lack of effective unions in the UK today. Sometimes this is blamed on workers being too young, lacking the traditions or experience of the labour movement, not having institutional forms of power, or perhaps that new technology has made it impossible. However, as one of the organisers explained to me: “we start with a basic question: what do you want to change? Then we talk through how they can build power at their workplace.” The union is not acting a service provider, but instead facilitating workers themselves getting organised.

Workers from a range of sectors have joined the holding branch so far. For example, in call centres, retail, hospitality, fashion, warehouses, social care, home care, as well as new forms of bogus self-employment that are spreading out from transport into new areas. In many cases, workers are organising in a context where they feel they must be careful about the employer finding out they have joined a union.

There have already been examples of successful organising to come out of the holding branch. One group of subcontracted workers were able to successfully argue for furlough instead of losing their jobs. This meant these new union members and their colleagues were supported through the pandemic, despite the employer initially saying there was nothing they could do. The letter they used to for their campaign has been shared with other workers who have then gone on to use it elsewhere.

In another workplace, new members have been supported to raise health and safety concerns, securing a new risk assessment and equipment. While examples like this may seem like standard practice for workers in a unionised workplace, the employer had previously refused to engage at all. Making these changes in the workplace has shown to others that organising is worth doing. Elsewhere, workers are starting to discuss the changes they want, in some cases pay and conditions, but also the continuing impact of the pandemic on their work.

The union hosts regular online drop-in sessions for members to share experiences. Elected officials from other branches of the IWGB have come to share their stories of organising and winning campaigns. These sessions have acted as forums for workers to discuss tactics and strategies they are developing in different contexts. Despite not meeting each other face-to-face, the constraints of the lockdown are being turned into new ways to digitally organise.

Across stories like this of small victories and successful organising, there is a clear lesson that emerges. When workers support each other and understand the different options available to them, workplaces no longer look “unorganisable.” These small victories provide the starting point for bigger organising campaigns. Across the holding branch there are groups of workers in shared sectors starting to hold specific meetings. Collectively working through the challenges and opportunities in their sector is a necessary starting point.

This experiment has already led to a new branch of the IWGB. There are many more potential branches in the process of formation. However, this is not without challenges. As one of the organisers joked with me: “if this was easy, we’d have done it already.” Clearly, there are many obstacles ahead for workers to build effective organising in new industries. Covid-19 may have provided the first push for many workers to get started, but we need many more initiatives like this to rebuild working class power across the UK.

Jamie Woodcock is a lecturer at the Open University and author of ‘The Gig Economy’, ‘Marx at the Arcade’ and ‘Working The Phones’