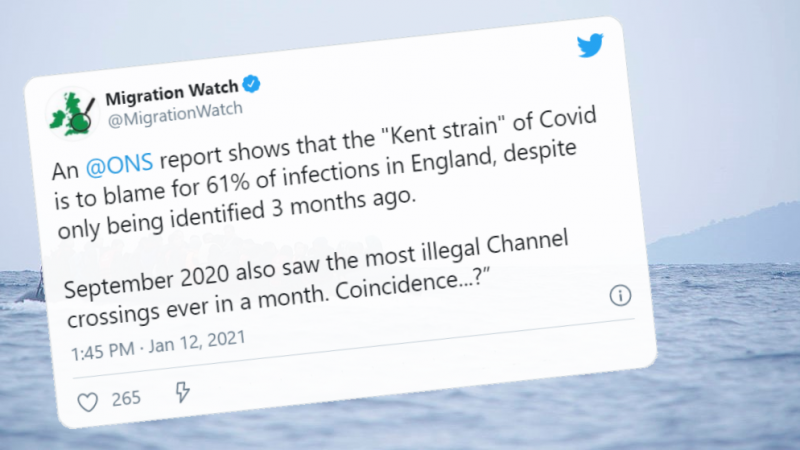 The vilification attempt references a tweet by Migration Watch apparently seeking to draw a link between an ONS report on increased ‘Kent variant’ infections in England with a spike in the number of asylum seekers crossing the Channel in September.

This claim came despite the fact that KentLive had conducted its own investigation into the variant of the infection, ruling out the possibility, and instead identifying that it had originated near Canterbury from someone who would have had UK residency and who suffered from an immunosuppressing health condition.

The attempt to link asylum seekers to the coronavirus variant during a pandemic is not at all atypical or out of character for Migration Watch’s prolific anti-migrant campaigning, although it normally focuses on presenting inflated numbers of ‘foreign criminals at large in the UK,’ ‘illegal crossings’ or projections of alarming future job and housing scarcity caused by immigration.

Typically, Migration Watch’s material also gets frequently reproduced across the sympathetic right-wing press, from The Sun to the Conservative Woman, which regularly runs anti-immigration opinion pieces written by the group.

Another common internet rumour has been that accommodating asylum seekers has caused UK citizens, including veterans, to be sleeping rough.

Adding to the unpleasantness of the latest rumour attempt is the fact that one of the main concerns of asylum seekers and immigrants in the UK over recent months is the high risk they face of catching coronavirus due to being housed or held in cramped accommodation where social distancing may be impossible.

In recent weeks, asylum seekers at two new ‘migrant camps’ in the UK have sought to protest their conditions – with difficulty given that under lockdown street protests have to all purposes become illegal.

An outbreak has recently occurred at one camp. At least eight asylum seekers living at Napier Barracks in Folkestone have tested positive for coronavirus, ITV news reported on Friday night.

One asylum seeker who asked to be unnamed told ITV that he now fears a mass outbreak at the camp that houses around 400. The outbreak followed a week of protests that saw a number of residents sleeping outdoors to protest over their cramped conditions.

Protests have also been organised at another migrant camp in Penally, Wales, due to similar complaints, although so far there have been no reports of coronavirus cases.

Meanwhile, a number of Covid-19 cases were also reported last week at the Harmondsworth immigration removal centre near Heathrow, making it the third removal centre to be hit by a coronavirus outbreak in the wake of outbreaks at Brook House near Gatwick, and Morton Hall, near Lincoln.

The Harmondsworth outbreak came just as an urgent letter was sent to the Home Office signed by multiple charities and human rights groups stressing the high risks of full-scale outbreaks at detention centres during the pandemic and urging for detainees to be released.

Signatories on the letter included Amnesty International, Liberty and the Joint Council for the Welfare of Immigrants, along with law firms and detention charities Bail for Immigration Detainees, (BID) Detention Action and Medical Justice.

Written by Raoul Walawalker, feature writer at ImmiNews, part of an organisation of UK and Ireland immigration lawyers.

Editor’s note: Migration Watch declined to comment on the Kent Live story when asked by LFF.