For Labour, freedom of movement is both a core principle and accepted policy. 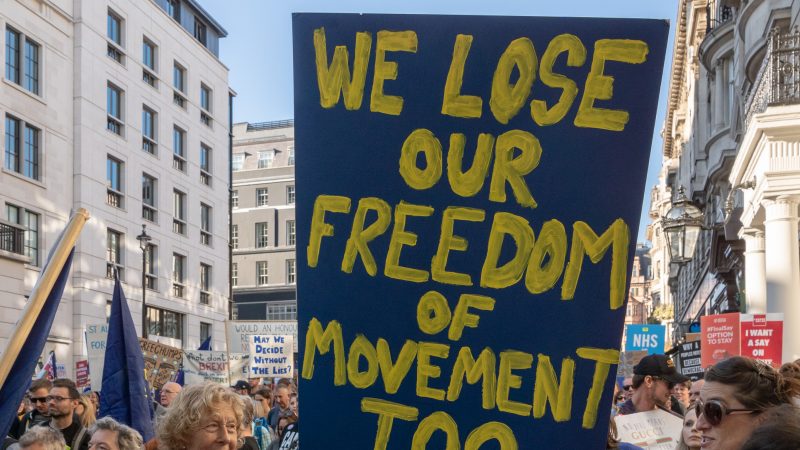 “We, in the labour movement, have to make sure that every time we talk about immigration we start by saying thank you”, began Keir Starmer’s emotive address to the CLASS think tank in late 2016, before going on to deride the need to assess migrants’ ‘contributions’ to the UK and the cruel hostile environment faced only (at that time) by non-EU migrants.

When he went on to run for party leader last year, he again pledged to members to ‘defend free movement as we leave the EU’, following up with the promise to argue for its restoration should the Tories, as expected, exploit Brexit to strip it from us.

So why yesterday, following an enormous expansion of border controls just days prior and on the back of Home Secretary Priti Patel’s sabre-rattling call to accelerate deportations, did Keir Starmer in conversation with Andrew Marr appear to drop such a pledge?

Those who are shocked have not been paying attention.

In 2017, Starmer called for a ‘fundamental rethink’ of EU free movement rules, drawing the very distinction between legitimate and illegitimate migrants that he had denounced at CLASS not long before, and it was at Labour’s national conference 2018 where he personally intervened in the Brexit composite process to prevent members’ motion on defending and expanding freedom of movement from reaching conference floor.

It is vital that we allow individuals, whatever their role or position in the labour movement, to reconsider and re-evaluate their political positions. But there comes a point where one has to begin to doubt the sincerity of a politician whose colours shift more often than a chameleon at a disco.

In many ways, the mysterious inner workings of Keir Starmer’s mind should not overly concern us. The leader of the Labour Party is placed there by its members, whose instruction they should obey. At 2019 Labour Party conference, delegates of local branches, trade unions and affiliates voted overwhelmingly for the most radical immigration policy in our history, committing the party to ‘maintain and extend free movement rights’, along with shutting down all detention centres, expanding the suffrage to migrants and a range of other crucial pledges.

Keir Starmer does not rewrite Labour immigration policy simply by implying as such on television. Instead, he has chosen to defy it. If he, or his office, wish to commit the Labour Party to a different immigration course, then he should have the courage to bring such a motion to our next national conference and argue for his position. To act in any other manner is not only cowardly, it makes a mockery of party democracy and weakens the ability of the labour movement to organise as one.

The Conservatives have shredded our rights to freedom of movement with clinical precision; their purpose is to make the lives of migrants harder, to drive them into precarity and poverty, to undermine their efforts to organise at work and to turn working class people against each other by the colour of the passports and, in effect, of their skin. It is a far right poison infecting mainstream political consciousness.

The labour movement has to stand for all working class people, wherever they come from – not only because migrants deserve parity as a matter of principle, but because our political project as a whole will fail to persuade if we allow the Tories to scapegoat migrants for the social crises – whether in low pay or crippling pubic services – that they themselves have deliberately caused.

It has to be said that all factions of the party are united by failure in this regard. Miliband’s ‘controls on immigration’ mugs need no resurrecting, and it was Corbyn’s leadership which wrote the end of free movement into the 2017 manifesto. Then, following an incredible amount of pressure, we finally forced some key elements of our conference immigration policy into the 2019 manifesto – but in words so mealy-mouthed as to undermine the very pledges.

It does not matter what has motivated any these leaders – whether disagreement in principle with the cause of freedom of movement or all-too-clever triangulation – because the effect is the same: a campaign to erode our democratic rights by the far right fundamentally unchallenged by the parliamentary wing of the labour movement.

Campaigning for basic positions of principle in the Labour Party often feels something of a Sisyphean struggle – each year, pushing up policy through our internal democratic structures only for the leader on high to push them back with a gentle nudge. But as members and as trade unionists we absolutely cannot assent to this; we must organise to hold Starmer to account, to demand an unequivocal and unyielding call for the defence of freedom of movement and migrants’ rights, and in so doing totally transform and democratise the basis of our party.

Mark Crawford is an organiser with the Labour Campaign for Free Movement and a rep for PCS Union.