Historic victory for McAnea as she takes on the leadership of the UK's largest union. 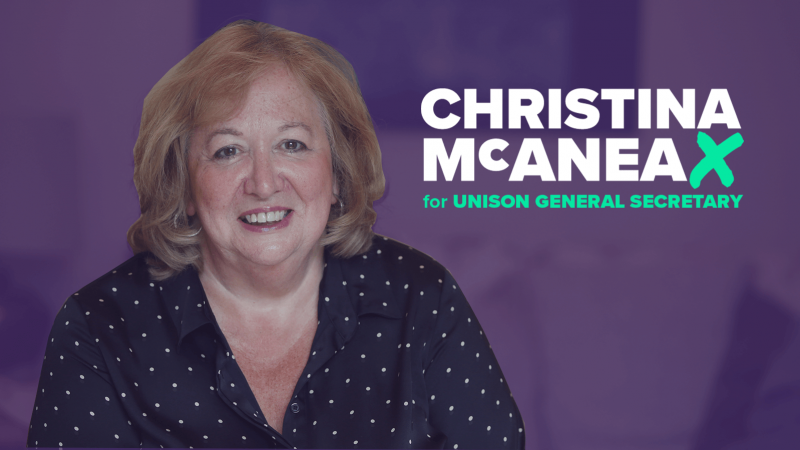 Christina McAnea has been elected the General Secretary of Unison – the public services union. She will be the first woman to lead the UK’s largest union.

McAnea won with 47.7 per cent of the vote. Her nearest competitor was Paul Holmes with 33.8 per cent.

The union has a predominantly female membership with 74.3% identifying as a woman in their 2019 equalities survey. However, the union has never been led by a woman before now.

During the contest, McAnea hit out at suggestions she was too close to Dave Prentis, the leader sho is stepping down after 20 years saying “Others are saying I’m the continuity candidate. I think it’s patronising with a big dose of misogyny that it’s only being said about the woman candidate – that ‘she can only do it if she can continue the work of the predecessor’.

“I find it annoying. Underlying that is real sexism that does exist in the union movement.”

McAnea started her Union career at the National Association of Local Government Officers (NALGO) and stayed when this merged into Unison in 1993 working as a national officer in negotiations. She later became the national secretary for education and then an assistant general secretary.

On winning McAnea said “I’m so grateful to everyone who voted for me and for the trust placed in me. I become general secretary at the most challenging time in recent history – both for our country and our public services.

“Health, care, council, police, energy, school, college and university staff have worked throughout the pandemic, and it’s their skill and dedication that will see us out the other side.

“Their union will continue to speak up for them and do all it can to protect them in the difficult months ahead. Despite the risks, the immense pressures and their sheer exhaustion, the dedication and commitment of our key workers knows no end. I will not let this government, nor any future one, forget that.

“Supporting public service workers through the pandemic, securing an early pay rise for NHS staff and ensuring the government backs down on its plans for an ill-judged pay freeze will be my immediate priorities. Pushing for the funding and the political will to create a quality, affordable national care service, where staff are respected and paid fairly, comes close behind.”

When asked whether strikes were on the cards McAnea said “There could be. Legislation always makes that difficult. It’s not impossible, and we’ve shown we can do it locally…I wouldn’t rule out national industrial action.

“If I had to hear some of the other candidates talk about the RMT or the miners one more time though…Our members do jobs which mean they’re essential workers. Most of our areas, you have to organise emergency cover. That completely changes the atmosphere. When our ambulance workers go on strike the government brings in troops.

“That’s how serious the government takes it. So, I don’t think we should bandy around the words ‘national strike’ in an easy fashion. You have to take the members with you. That’s the question.”

On the Labour Party

In a recent interview with Left Foot Forward, McAnea said “We try and influence the policies of the Labour Party rather than the other way round. I would support Keir where I could, provided I thought it was heading in direction beneficial to Unison members. We would support the party on issues we support. Where they bring in policies we don’t support, we would campaign against them – across the UK.”

When asked about funding she added “No one who comes in as GS can suddenly say ‘I will stop this’ – one [area] in particular is our political fund. I strongly believe that decisions on Labour Link should only be taken by members of the Labour party.”