Looks like the Home Secretary is ganging up on peaceful protesters... 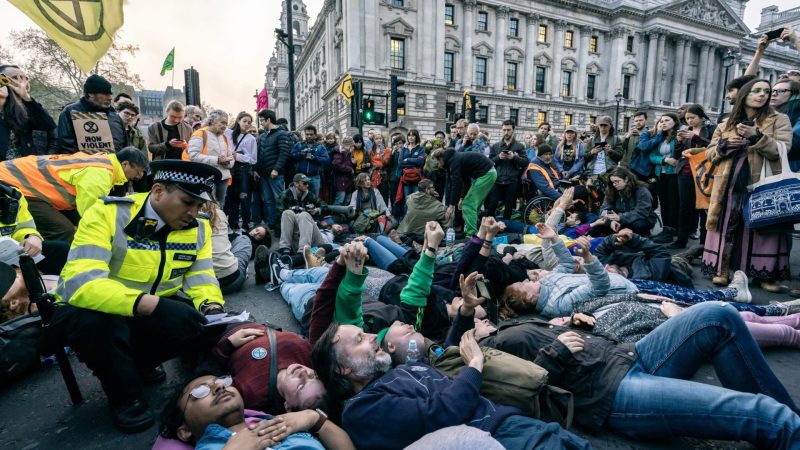 The proposed law is a threat to democracy and “another attack on our ability to stand up to power”, human rights campaigners Liberty said.

The plans – confirmed today in the Telegraph – come after a wave of Extinction Rebellion protests in September which blocked access to three printing presses owned by Rupert Murdoch.

The plans would curb protests which ‘threaten the tenets of democracy, including blocking Parliament, newspaper distribution, and judicial hearings’, according to the Tory-friendly Telegraph.

But campaigners are concerned about what they see as a long-term trend of threats to the right to protest. In 2019, the Metropolitan Police unlawfully used an injunction to ban protest during the Extinction Rebellion demonstrations, at which thousands of people were arrested.

During the Black Lives Matter demonstrations this year, the Home Secretary said the protests were illegal under Covid restrictions, and many demonstrators were subject to aggressive police tactics such as kettling. On 2nd November, a Home Office spokesperson said that protests are included in the ban on gatherings of more than two people, and on 4th November Home Secretary Priti Patel called on police to “strengthen” enforcement of the rules.

But Sam Grant, Head of Policy and Campaigns at Liberty, said: “We all want to be able to stand up for what we believe in, and in a healthy democracy protest is a key way that we can all fight for a better society. By restricting protest you do not protect democracy, you threaten it.

“These plans are the latest step in a clear campaign to undermine the right to express dissent, after a year that has seen people from all walks of life take to the streets to demand change and ensure their voices are heard.”

He added: “This move must be seen in the light of this Government weakening ways we can challenge it across the board, by trying to limit our access to law. Being able to challenge governments and other public bodies is at the heart of our democracy. Threatening protest is just another way this Government is limiting our ability to stand up to power.”

Unlock Democracy’s director Tom Brake is also concerned. He told Left Foot Forward: “We should be wary of a Home Secretary whose justification for clamping down on the right to protest is to protect democracy.

He added: “The right to peaceful assembly or to protest peacefully is enshrined in Article 20 of the Universal Declaration of Human Rights and any attempt to water it down, by a Government renowned for creating hostile environments, must be treated as highly suspicious.”

Asked by Left Foot Forward whether Labour will back new restrictions on protest from Priti Patel, Keir Starmer’s spokesman said today that the party will “have to look at the details” and wait until the legislation is published.

Apparently referring to Extinction Rebellion protests which triggered the review, he added that: “Police did take action…[Keir] supported the decision of the police.”

In the first few days of the second coronavirus lockdown in England, over 200 people were arrested at protests in London and Manchester, and more arrests were made at protests across the country over the following weeks. The Metropolitan Police incorrectly said that protests were illegal and made further arrests on 28 November.

Liberty successfully campaigned for the Tiered lockdown regulations that came into effect in December to include an explicit exemption to make clear that they do not prohibit protests.

Commenting on the plans from the Home Secretary, a spokesperson for Extinction Rebellion told this site: “Women have the vote in the UK today because of the Suffragettes’ protests, which were hugely unpopular with the government and the press at the time.

“With the Committee on Climate Change and the National Audit Office both releasing reports this year predicting that the government will fail to meet its existing climate targets, which are already woefully inadequate, it has never been more important that citizens have the right to hold their government to account.”

Restricting peaceful protest? Sounds like the actions of a bully…

Image credit: Atlas of the Future