The Daily Mail's attempts to divert from the government’s Brexit failings by using xenophobic, anti-EU rhetoric, has created an angry backlash 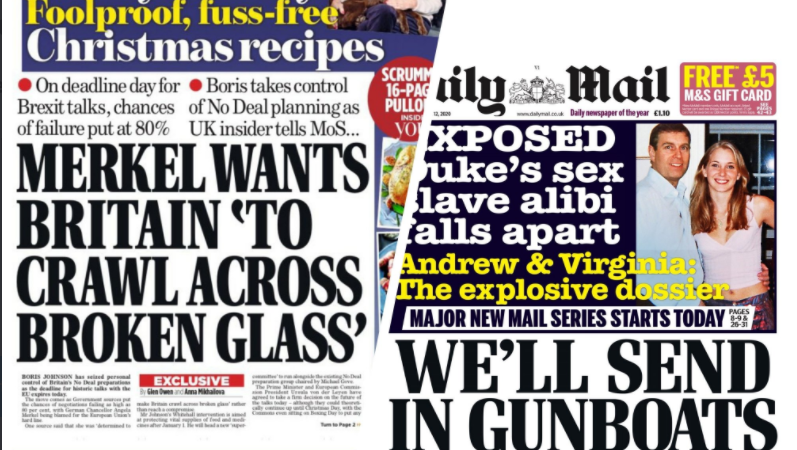 First it was the French, now it’s the Germans. The Daily Mail is excelling itself.

Over the weekend, the Mail savoured the chance to whip up xenophobic, anti-EU hatred, while masking the real culprits of the Brexit mess – the UK government and its ineffectual leader.

Angela Merkel is the Daily Mail’s latest victim, belittled by the paper as “the morally puritan daughter of a Lutheran clergyman” who has “pushed Britain to the brink of a No Deal Brexit.”

The article contends that British negotiators attempted to break the Brexit deadlock by proposing a ‘tariffs for freedom’ arrangement during talks, which would have meant the UK was released from responsibility of following EU rules. It was, however, Angela Merkel who, according to the Mail, played the most influential role in the EU’s dismissal of the idea.

The same article alludes to French President Emmanuel Macron’s alleged demands on driving a hard bargain with Britain, convinced that Johnson would “buckle and agree to the EU’s terms.”

Arguments over fish stock have been a sticking point in the Brexit talks. If there is no agreement on access to fishing waters, the UK won’t get full access to the EU market, without tariffs or taxes, to sell its fish there.

Relishing the chance to stir up troubled fishing waters with a nationalistic, ‘fighting-spirit’ response, the Daily Mail wrote how gunboats are being prepared for any ‘punch-up’ with ‘stormy French fisherman.’

The Daily Mail refenced the views of Admiral Lord West, a former chief of naval staff, who told Times Radio that the Navy will need more resources if it is to prevent EU fishing crews illegally entering British waters in the event of a no-deal Brexit.

As well as using Lord West’s words in an intentionally dramatic and hostile context, the Mail failed to cite the Admiral’s discontent with the aggressive rhetoric being used to suggest that cannon and machine guns will be deployed with Royal Navy patrol vessels,

“Talking about cannons and machine guns is, I have to say, stupid. That sort of rhetoric doesn’t help at all. I’d much rather that one knew that yes of course there are contingency plans and I’d imagine in the EU they would expect us to have contingency plans to look after our waters.

“Making a big fuss about it – I’m not a negotiator and I have to say I personally wouldn’t have made a big deal about that and I certainly wouldn’t have talked about using cannons and guns and things like that. That’s quite aggressive language really,” Admiral Lord West told Times Radio.

Diverting the blame from the government’s own failings

In its jingoistic attempts to pin the imminent no-deal Brexit on Europe, the Daily Mail is diverting the blame from the British government and and its incompetent leader.

Instead of wrestling with last-minute Brexit talks fiasco in the midst of a pandemic, any reasonable prime minister would have foreseen the calamity, and, as the Covid crisis escalated, asked the EU for an extension to the transition period.

In typical fanatical Johnson fashion, the prime minister blindly blundered on, his gung-ho actions putting the country on the cusp of a self-destructive no-deal Brexit.

Not everyone is sold on the Daily Mail’s jingoistic headlines and attempts to deflect the blame of an impending no-deal Brexit from the British government.

Molly Scott-Cato, professor of Green Economics at Roehampton University and former Green MEP, shared her thoughts on the hostility towards the EU being stirred up by the right-wing press.

“Talk of gunboats and crawling over broken glass show us how rapidly we can fall into hostility towards our closest allies and neighbours now that we have left the EU, which was always primarily a peace project. They are also wholly counter-productive when we need trust from the very same countries if they are to sign up to the trade deal our farmers and manufacturers so desperately need,” Molly Scott-Cato told LFF.

A backlash has been growing. As one reader tweeted on the coverage: “[It’s] going to be very difficult to ever have the courage to travel in Europe again. Utterly ashamed of my country, don’t know how I can deal with people who believe in equality, fairness, compassion when I seen to come from a xenophobic, graceless, petty, narrow- minded, aggressive nation.”

The Daily Mail’s coverage of the Brexit negotiation shambles has also been touted as irresponsible. As Juergen Maier, Austro-British industrialist and former CEO of Siemens UK tweeted in response to the Mail’s xenophobic claims that Merkel wants Britain “to crawl across broken glass”:

“These headlines are not going down will in Germany/EU, but then you have never missed an opportunity to whip up xenophobia @DailyMailUK. It is always dreadful, but at this point, to undermine a last-minute hope of a deal is particularly irresponsible.”