Couriers aren't 'heroes' they're workers - and they deserve the rights that come with that. 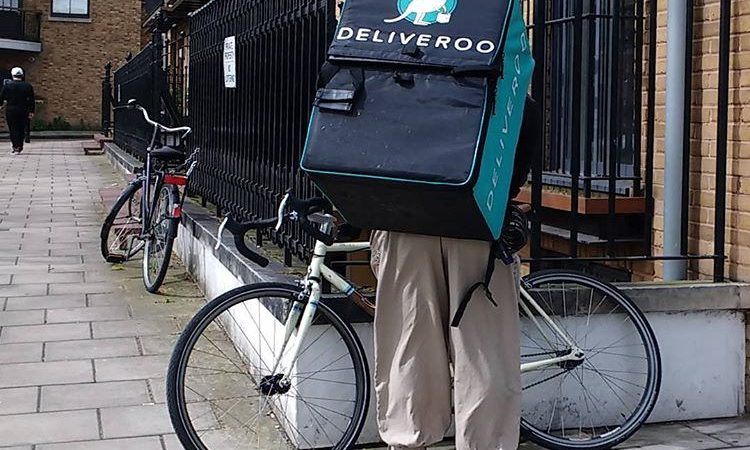 When Newsnight presenter Emily Maitlis ordered Pick and Mix via a Deliveroo rider at the weekend and casually tweeted “not all heroes wear capes” to her half a million followers, I felt it like a kick in the stomach. This is the language companies like Deliveroo have used throughout the pandemic to cover the grim reality that they’ve been exploiting workers on poverty pay for years and are making a killing from Covid-19 while treating riders as disposable as ever. Deliveroo doesn’t need free advertising from one of the UK’s most eminent broadcasters and, at this point, couriers don’t need more flattery, they need solidarity. That’s why we’re calling on Emily, you and everyone else to pledge their support in 2021.

Throughout the pandemic, couriers have provided a vital service delivering food, medicine and other items to help limit the transmission of Covid-19 and shield those at high-risk from the virus. That’s why the government classed couriers as essential workers but they’re still being compelled to work without essential rights.

During the first lockdown, I was working for the Doctor’s Laboratory (TDL) as a medical courier to support my family. As the country began to shut down and people fled from the streets to stay safe indoors I had no option but to continue working in order to pay the bills. On top of this, I was transporting the very thing people were hiding from in their homes: samples of Covid-19. I did this with minimal Personal Protective Equipment (PPE), without testing and, at first, with no sick pay. Amongst the huge amount of anxiety, I felt proud of the integral role I was providing to help fend off this deadly virus, but I felt ashamed of the way I was being treated by my employer who did little more than the bare minimum to give the impression they cared about the safety of their workforce; the reality was we were being treated as more disposable than ever. I blew the whistle on these practices that I felt were not only putting my life at risk, but also that of the hundreds of people I came into contact with, and, as a result, I was made redundant. My union, the Independent Workers Union of Great Britain (IWGB), has launched a trade union detriment and whistleblowing claim against TDL to fight for the justice I deserve.

There’s nothing exceptional about my story. During lockdowns many restaurants have closed their doors and couriers saw wages plummet, with some working ten-hour days for less than minimum wage just to survive. On top of this Deliveroo have flooded cities with extra couriers further driving down earnings and forcing couriers to work longer and longer hours, whatever the risks.

Companies like Deliveroo use the idea that they offer ‘flexible work’ to justify all this but we know that flexible conditions don’t have to come at the cost of basic rights and job stability for those at the top and the fact is there is no such thing as flexibility on sub-minimum wage. The only right you have is the right to scrape by.

Across the country, couriers are working for poverty pay often well below minimum wage, without secure contracts or the right to annual leave. Despite being asked to put themselves on the frontline of this pandemic, they don’t even have the safety net of sick pay if they develop symptoms or have to self-isolate. And all this is nothing compared to the financial free fall they face if they’re terminated. That’s why almost 70 MPs from all parties have already signed onto our demand for a fair terminations process and many more have called out Deliveroo for putting thousands of people at risk and undermining all our efforts to control Covid-19 by ignoring our demands around health and safety.

I wasn’t the only courier kicked to the curb, either. At the Independent Workers’ Union of Great Britain (IWGB) we’ve seen a rise in terminations during the pandemic. Workers can be scrapped with no evidence of wrongdoing on their part and with no due process: no right to a hearing, to trade union representation and no chance to appeal. Families are being left in free fall with no way to pay their bill. This is how companies like Deliveroo value their “heroes” while they rake in millions and watch business boom.

That business is booming tells us something important. These injustices aren’t a result of Covid-19, although the pandemic has made them – and the value of the workers affected by them – more visible. The root of the problem stretches right into the heart of the so-called ‘gig economy’. The ‘gig economy’ functions by exploiting a loophole in the logic of basic workers’ rights for all. By misclassifying couriers as self-employed, multinational companies like Deliveroo and Uber can get away with denying them even the most basic rights that were intended to be universal, like the right to a guaranteed minimum wage and annual leave.

Exploitation isn’t a side effect of the ‘gig economy’, it’s the business model. Ask any one of our members out delivering every day or desperately searching for work now they’ve been scrapped.

The IWGB has successfully won a number of legal cases forcing companies to respect their workers’ rights and classify them properly – but there’s a long way to go and these corporations are fighting back to protect a system that works for them. In the meantime, it continues to work not just at the expense of workers but public health and safety, too. With issues like sick pay, job security and the provision of Personal Protective Equipment (PPE) now having a direct impact on our ability as a society to combat Covid-19, workers rights have become a public health issue and the time to act is now.

That’s why we’ve launched the Clapped and Scrapped campaign, to demand essential rights for essential workers. That means a living wage, workers’ rights, trade union representation and a fair terminations process. It means challenging the whole ‘gig economy’ culture that says these key workers are disposable when the country can see now what our union has always known: they are essential. It means more than words, it means taking action to fight for our frontline. So please, take the #ClappedAndScrapped supporters’ pledge, tell your friends and tell every courier you meet about the IWGB because in 2021 we’ll be fighting for them like never before.

Alex Marshall is a courier in London and President of the IWGB. He tweets here.