Conservatives seem to be adopting the language of the US alt-right. 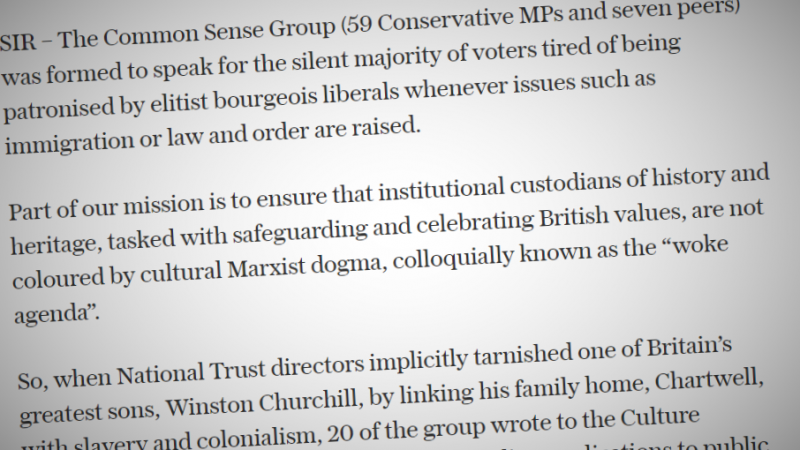 Nearly 30 Conservative MPs and Lords have complained about so-called ‘cultural Marxism’ in a letter to the Telegraph – using a vague phrase beloved of the US far right.

The letter – published on Monday – is the first public outing of the ‘Common Sense Group’ of 59 Conservative MPs and seven peers, which claims to ‘speak for the silent majority of voters tired of being patronised by elitist bourgeois liberals’, over immigration, law and order, and umm, statues.

The politicians say they want to push ‘custodians of history’ away from being ‘coloured by cultural Marxist dogma’ or the ‘woke agenda’.

That phrase ‘cultural Marxism’ has been described as a ‘conspiracy theory with an anti-Semitic twist’ by leading US anti-hate group the Southern Poverty Law Centre (SPLC).

The idea of cultural Marxism centres around a conspiracy theory that largely Jewish left-wing scholars of the Frankfurt school in inter-war Germany “devised a manipulative programme of progressive politics intended to undermine Western democracies.”

The SPLC says the conspiracy theory “posits that a tiny group of Jewish philosophers who fled Germany in the 1930s and set up shop at Columbia University in New York City devised an unorthodox form of “Marxism” that took aim at American society’s culture, rather than its economic system.” In the US, it has been latched on to by the alt-right.

Though the phrase’s meaning today is contested, Jewish groups here are concerned about its growing use. The Board of Deputies of British Jews wrote to Attorney General Suella Braverman last year with their concerns after she used the phrase.

In a speech to a right-wing think tank, Braverman said: “We are engaging in many battles right now. As Conservatives we are engaged in a battle against cultural Marxism, where banning things is becoming de rigueur; where freedom of speech is becoming a taboo.” Braverman refused to apologise.

But despite being urged not to use the phrase again by Jewish and anti-racist groups, it looks like Conservative figures are doubling down.

All this comes amid a culture war – whether over free speech, statues or a ‘traditional’ lens of British history – that Tories are very happy to stoke.

The signatories of the Telegraph letter suggest they are defenders of British history and culture. They boast of playing a role in the National Maritime Museum ‘reassuring the public about their intentions’ after the museum promised to portray ‘multiple perspectives on history” and thus review Nelson’s “heroic status” in light of the Black Lives Matter movement. (Heaven forfend people learn that Nelson, as well as being a Naval hero, once wrote: “I have ever been and shall die a firm friend to our present colonial system.”)

Though the Telegraph letter complains about an ‘elitist bourgeois’, among the anti-elite signatories are working-class heroes like (I’ve just picked the top five):

Of course, backgrounds shouldn’t be a big deal. Unless, that is, you are raging against ‘elites’ in a national newspaper.

But it’s that phrase ‘cultural Marxism’ that has caused the most concern. Commenting, a spokesperson for Campaign Against Antisemitism told Left Foot Forward: “Terms such as ‘cultural Marxism’ and ‘elitist bourgeois liberals’ can function as antisemitic dog-whistles, even if they are not always intended as such, while the dangers of promoting conspiracies about powerful minorities controlling society are obvious.

“The authors of this letter should endeavour to find less toxic language to promote their politics.”

The spokesperson also noted the ‘interminable’ investigation into alleged anti-Semitism in the Conservative party: “Until the results of those investigations are made known, we can only assume that they are still in progress, which is unacceptable after so long. The Party must immediately explain what conclusions have been reached.”

A spokesperson for the Community Security Trust, which monitors anti-Semitism in the UK, urged politicians to ‘better understand the language they use’: “Some words and phrases risk encouraging antisemitic interpretations even where this is not intended. “Cultural Marxism” and “globalists” are current examples of this phenomenon.”

“There are other ways for politicians to make the same points without using language that carries this baggage,” the CST said in a statement.

We’ll assume, in good faith, many of the signatories don’t know the history of the phrase. But whatever the case, there’s a worrying tendency in the Tory party to adopt the tactics and language of the US hard-right – whether it’s raging against ‘lefty lawyers’, ramping up anti-immigration rhetoric, or using racialised language.

We also asked the Conservative Party what happened to the investigations into alleged anti-Semitism.