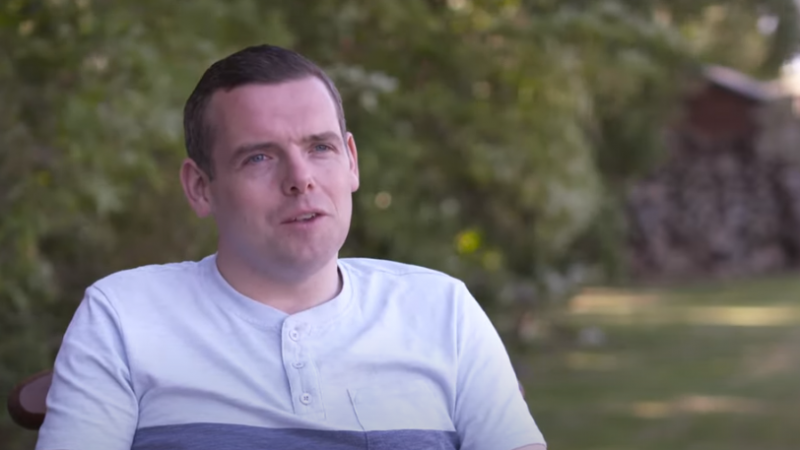 Douglas Ross, Scottish Tory leader, said he will seek a coalition with “anyone and everyone” in next year’s Holyrood election to evict the SNP and prevent the party from “separating Scotland from the rest of UK.”

Ross’s comments were made at the launch of the Scottish Tory conference over the weekend, when he told members independence is a greater threat to the Union than socialism.

“[The SNP] want to tear us apart from our friends, our family and our colleagues in England, Wales and Northern Ireland,” said Ross.

The remarks have been met with a barrel of disproval from opposition, labelled as “desperate and pitiful.”

Scottish Labour voiced their rejection of the invitation, tweeting: “Scottish Labour happy to rule out a sensational deal with Douglas Ross. Or any kind of deal, for that matter.”

Scottish Labour leader Richard Leonard blasted the brazenness of Ross’s remarks, saying: “In the week we learned that Boris Johnson and the Tories think devolution is a ‘disaster’, Douglas Ross has got a nerve to even suggest this. Boris Johnson and the Tories are the biggest threat to the future of the UK, and the biggest threat to everyone struggling as a result of their toxic policies. Under my leadership, Scottish Labour will be working to oppose Tory policies – and certainly not helping deliver them.”

The SNP dismissed the “shoddy invitation” as “desperate and anti-democratic.”

Keith Brown, SNP deputy leader, accused Ross of “desperately trying to put the Better Together band back together in an increasingly pitiful attempt to shore up a Union that continues to fail Scotland.”

“Both the Tories and Labour’s Trump-like denial of Scotland’s democratic right to hold an independence referendum is doomed to fail,” said Brown in a press statement.

“Days after Boris Johnson’s mask slipped and he revealed he thinks devolution has been a disaster, we now learn the untrustworthy Tories are looking for useful idiots to support their toxic policies.

“The Union is in deep trouble, totally undermined by the biggest power grab in the history of devolution and Boris Johnson’s plan to impose a devastating extreme Brexit, against Scotland’s will, in the middle of a global pandemic,” Brown added.

Douglas Ross, currently the Westminster MP for Moray, is gearing up for the 2021 Scottish Parliament elections, where he is standing to become an MSP. He will be hoping to become First Minister, despite the SNP’s commanding poll lead.

Patrick Harvie MSP, co-leader of the pro-independence Scottish Greens shared his reproach of Ross’s aspirations and the antagonism felt in Scotland towards the Tories.

“Douglas Ross’s ambition to be First Minister is not based on reality. Scots are appalled with a Tory Government which has inflicted cruel austerity and Brexit on them, and which seems desperate to dismantle devolution,” Harvie told Left Foot Forward.

“Who knows where Labour is at, but working with the Conservatives on the Better Together campaign in 2014 did not go well for them. A third of Labour voters now say they would vote yes. For them, a more effective way to challenge the SNP and get progressive things done will be to elect Greens,” Harvie added.

“It is clear to absolutely everyone that Tory position is: if you’re against independence you must make it your entire political identity and use it to build a career, but if you’re in favour of independence then talking about it is embarrassing,” writes Black.

Made less than a week before Douglas Ross used the Scottish Tory Conference to hint towards a coalition with opposition, Black’s words gave an uncanny insight into Scottish Tories using the independence debate to shore up support.