When Tories tell you who they are - believe them. 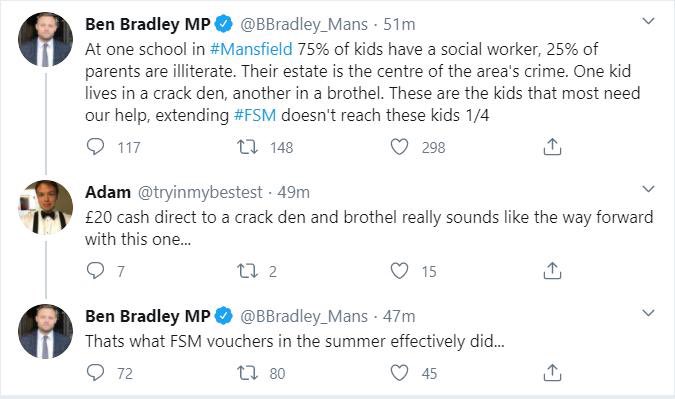 Ben Bradley has been the public face of Tory indifference to the suffering of hungry children over the holiday period.

But he is far from the only Tory MP to have dismissed the concerns of the public and the campaign of footballer Marcus Rashford to ensure that children are fed over the autumn break.

Many Toryies are claiming that poor parents unable to feed their children is somehow a failing of their own – rather than an example of their being failed by a cruel system.

Here’s Calder Valley MP Craig Whittaker in an Facebook post claiming the government are helping enough – something many people – in his constituency and more broadly – will know not to be true.

Combative MP Philip Davies made the same point in a somewhat rude email to a 16 year old constituent.

Meanwhile MP for North Devon Selaine Saxby seemed to suggest that businesses who went out of their way to help children at their own expense should expect no further support from the government (though she has since expressed regret for doing so).

The Prime Minister’s spokesperson has said that they are in talks with the footballer leading the charge against child hunger. Not so says Marcus Rashford.

The lesson here is clear. When Tories tell you who they are – believe them.

Emma Burnell is a freelance journalist and political and communications consultant.