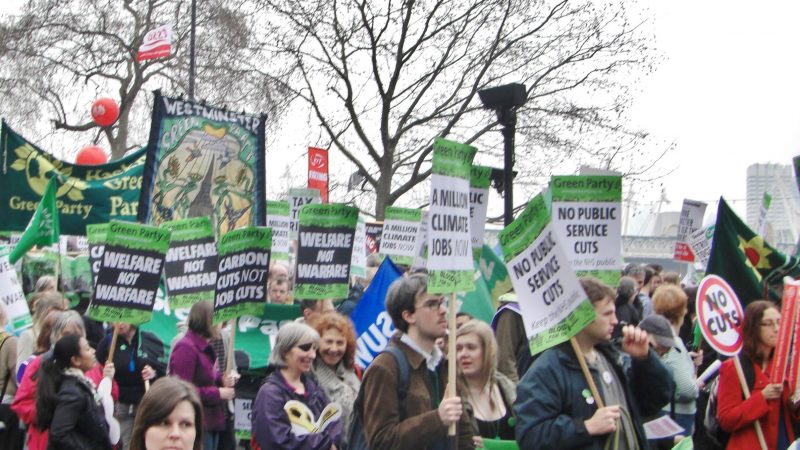 Congratulations to Siân Berry and Jonathan Bartley for their re-election as co-leaders of the Green Party of England & Wales. What’s next?

Now the party has chosen its leaders and placed its trust, it must make the tough political choices to make a breakthrough and bring about the political, economic and social change we need.

That will happen when the party applies electoral pressure to all parties to embrace the Green agenda; when we push this government to take the action required in response to the climate emergency; when we inspire businesses, consumers, investors, communities, civil society, households and the third sector to think and act in a way that supports the climate and environment; and when we get more Greens elected and in other positions of influence.

All this against the backdrop of a deeply worrying 15% turnout for the vote for the leadership. This is no time for complacency or apathy. Members join and vote because they think a party has a key role in national affairs and they have a part to play. Is this now the case even amongst Green Party members?

We’re writing this only because the Greens matter. It is born of tough love – the toughness being a product of love. As political trailblazers the party plays a unique role in UK politics. Ideas and new concepts often come from the Greens first, from UBI to a four-day week and the Green New Deal. Some of what the party practices points to a new politics. Not least the willingness to collaborate with other progressive parties – sometimes at the expense of Green votes, as we witnessed in 2017 and 2019.

But is this enough? In the face of catastrophic climate breakdown, the party’s political advance is too slow. If the system isn’t changing, we all have to ask ourselves why and what we can and must do differently (which applies to Compass too). The media and the electoral system are against the party – but we have to find a way around them.

The Greens are a political party seeking high office to change the country. Greens best get the green agenda and other parties can’t represent this. But with only one parliamentary seat and little if any prospect of more at the next election, surely other influencing strategies have to be at least discussed? After all, UKIP and then the Brexit Party had a profound impact on the politics of the country while only holding two temporary by-election seats. Yes, there is a long march through the councils. But will that work in the time we have?

So, the first set of choices are around substance. Can the party be a left/green catch-all party with policy and campaigns on the whole gamut of issues? Or should there be a spine of focus on the environment and some discipline to stick to a core green message and agenda – like how UKIP used Europe?

How much is the party a standalone thing in its own right, and how much is it the political wing of the green movement? Here the Green New Deal offers the strategic frame to position the party and its programme more coherently, giving a programmatic outlet for the movement. Campaigning on everything loses the party definition and focus.

This in turn begs a wider question about where the party fits on the traditional left-right spectrum – and whether there is a more nuanced way to attract support from more small-c conservative supporters, while still maintaining a necessarily radical policy agenda on climate.

Decisions here then fold into electoral strategy. First, does the party just compete with Labour for the left-wing progressive vote? In a post Corbyn era that looks attractive, and keeping Labour on its green toes matters, but does it help address the climate emergency if it’s just about shifting some progressive votes from red to green?

Of course, at one level the more votes the party gets the better. But that might just lead to more Tory MPs and no more Green ones. The challenge is also to win over environmentally and socially conscious Tory voters (there are some), thus weakening the Tory position and forcing them to move more convincingly on to Green territory.

Here Martin Farley throws up a real challenge, making the case that the party should compete everywhere, not least to win over these small-c conservative votes. More analysis and data is needed on whether competition or cooperation is more likely to lead to a change of government. It could be that it’s different in different seats.

We need to know when and where to play harder. Unlike 2017, where the Progressive Alliance was assembled hastily as a rear-guard action, and 2019 which was Brexit dominated, the next general election needs to be fully planned and prepared for.

Given Scotland, it’s very hard to see how Labour can hope to win outright on its own. This should open space up for the Greens and other progressives. Can some kind of ‘Common Platform’ be put in place around key democratic, economic and environmental concerns such that cooperation doesn’t look like a coalition of losers? And can the Greens, along with the Lib Dems, put real external pressure on Labour to back electoral reform, and act in concert with the strong and growing internal pressure building within Labour for change? Labour must be made to commit in blood to make PR happen in any new parliament. Labour has to be shamed if necessary, into backing a 21st century democracy.

The red/green local alliance in France shows one way forward.  This was built out of the near-death experience of the socialists in France, but could offer insights and lessons for the UK if and when Labour gives up on the fiction that it and it alone can deliver a good society. To change Labour, the Greens and others have to challenge Labour more.

After all, the only thing the Green Party can really change is itself. So as well as shaping and defining its purpose, the party structures and culture must become more radical: adopting practices like all member assemblies to help decide strategies and policies, opening the party up even more to the green movement and local collaboration. And finally, if the party believes in PR and political pluralism, then it should be thinking through how a new democracy could really operate in the age of networks, and how an unstable progressive alliance government could hold together for the benefit of the country.

The same leaders don’t have to mean the same strategy. The next election must be a ‘big change’ election. The Green Party can and must make it so.

This article was written by a group of Compass Greens who have been discussing the strategy of the party. It is republished from here, with kind permission from Compass and the authors.