Organisers insist the protests will be 'Covid safe' and kept under review. 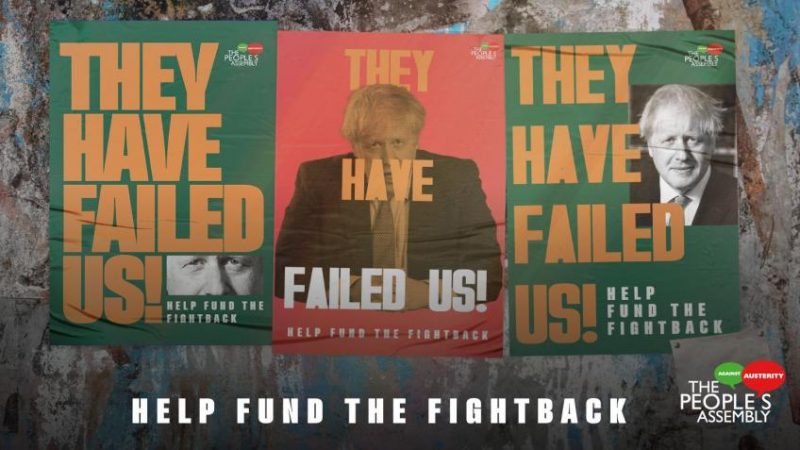 The People’s Assembly Against Austerity has called a nationwide Day of Action against the government’s handling of the coronavirus crisis.

All events are being kept under constant review to see whether the situation changes, particularly in light of new restrictions.

Protest leaders can be hit with individual £10,000 fines if they are found to breach Covid rules, with groups ranging from anti-lockdown protesters to Extinction Rebellion being hit by Fixed Penalty Notices in recent months.

People’s Assembly organisers say their protests will be exempt from the maximum six person rule as long as they risk is assessed, social distancing is observed, and attendees wear masks.

In a statement, the group said: “We have endured so much at the hands of one of the most incompetent and right-wing governments we have ever seen. Not only has there been a crushing pressure on wages, services and living standard as a result of a decade of austerity, we are now having to live through a global pandemic with ‘leaders’ who work fundamentally against our interests. They have ultimately failed us.

“They locked us down too late, they failed to deliver PPE on time and to safe standards. They were instrumental in creating a care home crisis, have caused confusion and fear over school reopening…

“Any victories against this government has come from people organising. We cannot allow hope to fade and solutions to the crisis, a crisis ultimately caused by capitalism, to be captured by the conspiracy theorists and the far-right.”

Speaking to Left Foot Forward, National Organiser Ramona McCartney said another round of austerity is ‘very very likely’: “I can’t see why this particular government wouldn’t push an austerity agenda.”

“Communities have been decimated by ten years of austerity. If they push anything on top of that I don’t know how communities are ever going to get back from it,” she said.

Asked about how the protests will be Covid safe, McCartney said the plans will be kept under constant review: “We’re not sure what will happen [but] each event will have a risk assessment and will be stewarded. We’ll be making sure people wear masks and are distant.”

The organisers will be bringing together progressive groups to issue a set of demands closer to the time – a charter for a better Covid response.

PA organisers have met with trade union representatives, as well as Stop the War, CND, and Disabled People Against Cuts over the past week.

A full list of protests and locations will be circulated by the end of this week.

Set up in 2013 to challenge austerity, the group has nearly 30 local groups across Britain.