We speak to the trade union movement leader about bad bosses, Brexit law-breaking - and her experience of working with the Tories. 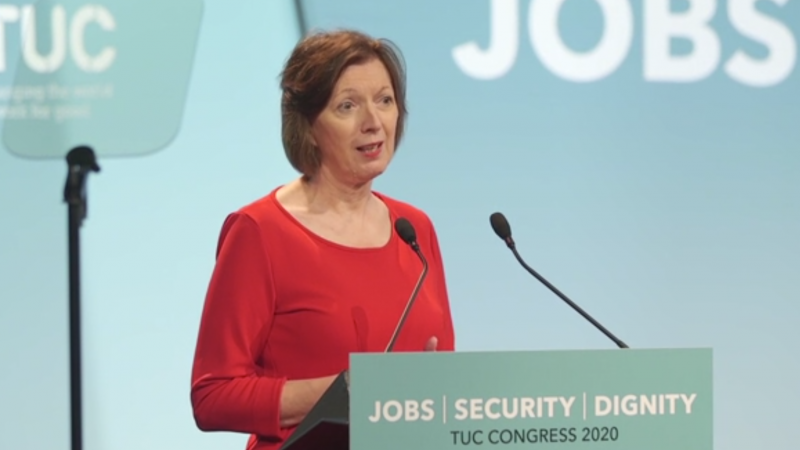 On Monday, the Trades Union Congress – which brings together more than 5.5 million workers from 48 member unions in the UK – published its blueprint for saving jobs and retraining workers affected by the pandemic.

In her keynote speech, General Secretary Frances O’Grady issued a challenge to ministers to back the plans and extend the Job Retention Scheme, which is due to end in October.

As pressure mounts for Chancellor Rishi Sunak to act quickly, we speak to the union movement leader about the looming economic crisis – and what needs to happen next.

Josiah Mortimer: The TUC has just launched its proposals for protecting jobs during the pandemic. What is it you want to see?

Frances O’Grady: “We want to build on the strength of the Job Retention Scheme. It’s something unions pushed for hard, as part of an international effort. It was the first time in the UK that support for business was made conditional on that money going into wages. We’re in a new phase now.

“We’ve put forward job protection and upskilling scheme, for employers to bring workers back in with at least part-time hours. The downtime would be used for retraining and upskilling.

“We need to protect decent jobs that would otherwise go to the wall. The biggest threat we face is mass unemployment. It would set our economy back massively just at time when we need to grow.”

What hope do you have that the government will listen to your demands?

O’Grady: “We’ve got to be hopeful that they’ll listen. They’re in charge, and millions of livelihoods at stake. This is about our future. It makes no sense to pull the plug [on support].

“The government should focus on sorting out test and trace. Safety is the key to unlocking the economy.”

Labour leader Keir Starmer addressed Congress, calling for a replacement to the furlough scheme due to end in October. What did you make of his speech?

O’Grady: “Keir was very clear about embracing the principles that should design the next phase of job support. It was about protecting people’s livelihoods – are wage subsidies are the best way. It’s also about investment, and about basic values of fairness. Working people can’t be expected to pay the price for this crisis.

“[He gave] strong support for real families who are potentially facing disaster if the government sits on its hands, and real empathy.

“It’s important we have a leader of Her Majesty’s Opposition who is prepared to stand up for working families.”

In May you noted that ‘throughout this crisis the TUC has sought to engage constructively with ministers.’ What’s the TUC’s relationship with the government been like since then?

O’Grady: “As a trade union movement, we never make any secret of fact that working people do better under Labour. But we also know our job is to represent working people, and always look for a constructive, good-faith relationship.

“Clearly getting that Job Retention Scheme – which supported one in three jobs at its peak – was absolutely critical. We always give credit where it’s due. We have worked with ministers on health and safety, and we play it straight. But if people don’t take issues like safety seriously, we’ll call them out.

“This is too serious to play games with – this is about a deadly virus. We’re always ready to get around the table. But how much more sensible would it have been for the government to agree to setting up a [business, union and government-led] National Recovery Council at the start?

“Ironically, unions and employers are meeting all the time. The only empty chairs are for ministers.”

During the pandemic we’ve seen some high-profile cases of companies sacking workers en masse and then rehiring them on worse contracts. What’s your message to them?

O’Grady: “I think it’s pretty shameful that some companies who’ve helped themselves to taxpayer support, are then without consultation or agreement threatening workers that if they don’t sign up on worse pay and conditions then they’re out. That is shameful and just disgraceful.

“We’re pragmatists. We do deals all the time. The idea that anyone would be using such an awful crisis as this to do what they keep trying to do – weaken unions – it stinks, and the public knows it stinks. There’s always time for them to think again. We believe in redemption if they want to come back to the table.

“We’d also like to hear government ministers speaking up and saying this is no way to behave. It shouldn’t matter what part of the political spectrum you’re on.”

The latest employment figures published by the Office for National Statistics (ONS) today show the largest annual rise in unemployment for eight years – with young people seeming to take the biggest hit.

O’Grady: “On Thursday, we know that unless firms are confident something is coming at the end of October to replace furlough, that’s the notice period they have to make by law if they intend to make redundancies.

“We’re sleepwalking into a jobs disaster unless government gets its act together and makes it clear that support will be there after October. The pandemic isn’t going to end in October.

“We’ve argued for job creation. We’re really alert to the fact that there’s a whole generation of workers who risk being scarred by being out of work.

“Young people have taken the biggest hit and are continuing to take the hardest hit. We’re worried too about workers in their 50s – getting a new job in your 50s isn’t easy either. On the jobs front, it should really worry the government that manufacturing is in trouble.”

On Monday night MPs backed the second reading of the Internal Markets Bill, which threatens to rip up the Withdrawal Agreement and break international law. What does that say about the Tories’ approach to Brexit?

O’Grady: “We’ve been absolutely consistent throughout this that our priorities are a good deal that protects jobs, workers’ rights, and the Good Friday Agreement.

“How can a government that is itself prepared to break the law ask anyone else to follow it? I mean it at a personal level: how can you issue orders about health restrictions then say you yourself are above the law when it comes to international agreements? It doesn’t add up. It’s one rule for us and another for them.”

Questions are paraphrased and some responses have been trimmed for brevity.