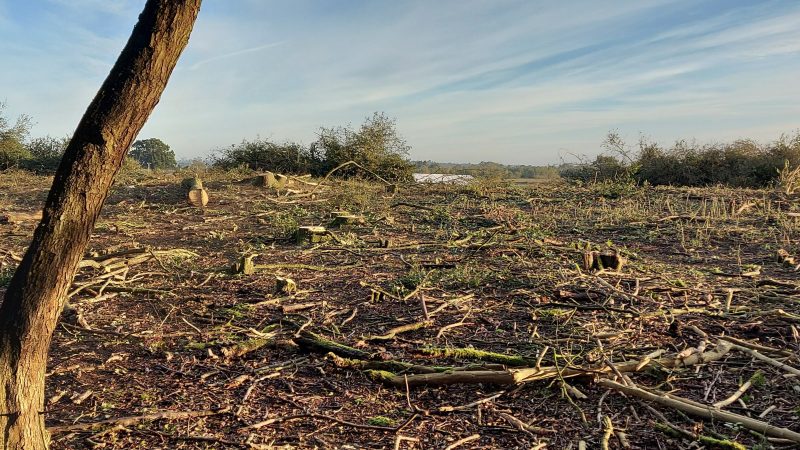 On Thursday campaigners from Stop HS2, HS2 Rebellion and others will be marking ‘National Tree Killing Day’ with socially distanced activities in Lichfield, Leamington Spa and London.

This week HS2 began cutting through the ancient woodlands of Little Lyntus and Fulfen in Staffordshire and ‘obliterated’ part of Calvert Jubilee Nature Reserve in Buckinghamshire, according to environmental groups.

It comes as Boris Johnson pledges to protect UK biodiversity and wildlife – while backing what anti-HS2 activists call ‘the biggest deforestation project since the First World War’.

In Leamington Spa, the launch of a four-day Stop HS2 event will start at 10:30am and include guest speakers high-profile human rights barrister Michael Mansfield QC and Dr Gail Bradbrook of Extinction Rebellion. In Lichfield, campaigners will be gathering near Little Lyntus Wood from 10am to protest against HS2’s felling there and to raise public awareness of ‘the damage being done to these irreplaceable habitats during the ongoing climate emergency’.

In London there will be a socially distanced walk – starting at 11am at Dixon Clarke Court in Islington – where trees are due to be felled on 6th October. The marchers will go through Euston and from there to Parliament.

Gail Bradbrook, co-founder of Extinction Rebellion, said: “HS2 is a hyper expensive nature destroying aviation shuttle service being pushed forward at a time when travel is reducing and we need to fund a green transition. Boris Johnson stated earlier this week that “Extinction is forever – so action must be immediate”.  I couldn’t agree more – HS2 must be cancelled and our biodiversity preserved and protected – the government must act now.”

Responding to a question from Left Foot Forward today, Labour leader Keir Starmer’s spokesman said: “We support HS2, but we’ve said for many months that the project needs to be developed with more sensitivity to local communities, and that includes sensitivity to the environmental impact, particularly in woodland areas in parts of the country. We are sympathetic to some of the concerns that have been raised.”

Nikki Jones, a Stop HS2 campaigner from Warwickshire said: “The UK Government cannot continue to say one thing and do another. Either you protect the environment and the natural world, or you don’t. Spewing out soundbites means nothing if it is not backed up by action.  HS2 was designed over a decade ago and, in spite of the Government declaring a climate and ecological emergency and signing up to the 2015 Paris Agreement in the meantime, not one iota of this project has changed. We need decisive action on climate change, and we need it now.”

An HS2 spokesperson told Left Foot Forward: “HS2 is happening with construction well underway; there are 10,000 people already working on the project and we recently announced a further 22,000 jobs across the country at a time when it needs them most.

“All leading environmental organisations agree that climate change is the biggest future threat to wildlife and habitats in the UK. By providing a cleaner, greener way to travel, HS2 will help cut the number of cars and lorries on our roads, cut demand for domestic flights, and help the country’s push to reduce carbon emissions. Even before HS2 starts operating, there are countless environmental projects and innovations occurring up and down the route to protect, preserve and enhance Britain’s precious natural environment. We’d urge environmental groups to help us in getting people out of their cars, off planes and onto low-carbon, high speed rail.”

There are 52,000 ancient woodland sites in England. HS2 assessments state that 43 will be affected by HS2’s route between London and Crewe. A statement from the organisation said 80% of the total area of the 43 ancient woodlands will remain intact and untouched by HS2.